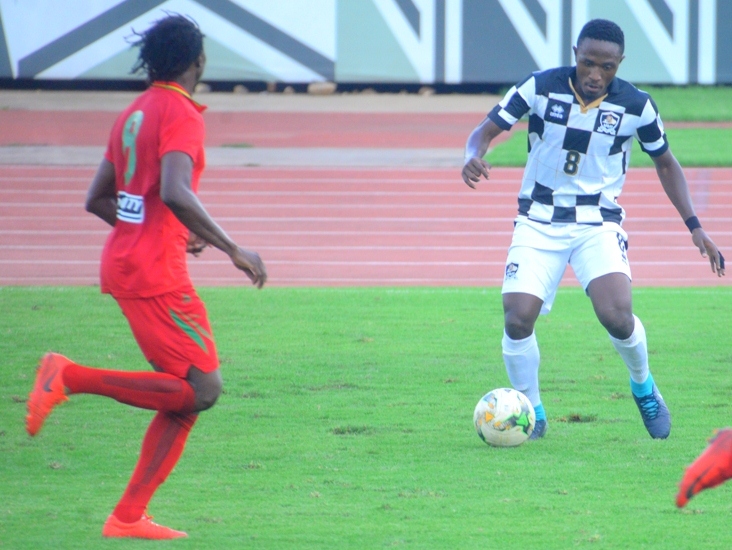 Impessive midfielder Bizimana Djihad scored the first goal and created the second goal as APR Fc defeated Djoliba only to bow out on away goal rule. Courtesy Photo

Rwandan side APR Fc defeated Malian side Djoliba AC de Bamako 2-1 in the return leg of the first round played on Saturday at Amahoro Stadium but the result was not enough to see them through to the play-off round of the Confederation Cup.

The military side scored two goals courtesy of a 19th minute strike from Djihad Bizimana and Nshuti Innocent in the 73rd minute.

Visitors side Djoliba AC de Bamako had scored an early goal in the 9th minute, a goal which dented APR Fc’s qualification round.

The 2-1 win result was not enough for the military side to proceed as they drew 2-2 on aggregate with the Malian side qualifying on an away-goal rule to the play-off round of the CAF Confederation Cup. For APR Fc to proceed to the next round, they were required to score at least three unanswered goals.

The military side tried as much as possible to find the net but attempts from Hakizimana Muhadjiri, Bizimana Djihad and Nshuti Innocent couldnot be converted as Djoliba AC goalie Adama Keita defended his goal with good saves.

Djoliba coach Fanyeri Diarra said, “We are happy with this qualification. My players did a good job, defended well after conceding two goals,”

“All in all, this is a good start to our campaign and we hope to reach the group stage of the Confederation Cup. We will see who we draw in the play-off and prepare well to seal our target,” added Diarra.

APR Fc coach Ljubomir ‘Ljupko’ Petrovic praised his team despite the exit. “My players had good mentality and after going a goal down, they responded well to win the encounter. The win was not enough to take us through because of an early goal we conceded in the first ten minutes.”                                  “We have not reached our target, we will now turn our focus to the domestic competitions,” added Petrovic.

Djoliba AC de Bamako had previously reached the group stages of CAF Confederation Cup in 2012 while APR have never reached the stage since they made their debut in Africa’s biggest club competition in 1997.

Elsewhere, South African side Supersport United and Congolese side La Mancha joined Djoliba AC de Bamako in the play offs of the CAF Confederations cup after easing past their opponents in the first round

Supersport United came from goal down to beat Angolan side Petro Atletico de Luanda 2-1 in a match played at the lucas Moripe stadium in Pretoria .

Goal hero Mnyamane scored a brace with his 82nd minute goal proving vital after the home team went down as early as the 49th minute.

Petro de Luanda’s Pedro drew first level for the visitors for a half time lead .

The lead lasted for the better part of the match before Mnyamane drew level in the 77th minute before scoring the winning goal.

Sudanese side Al Ahly Shendi failed to secure the other play off spot after losing to Congolese side La Mancha 4-3 on aggregate despite winning 2-1.