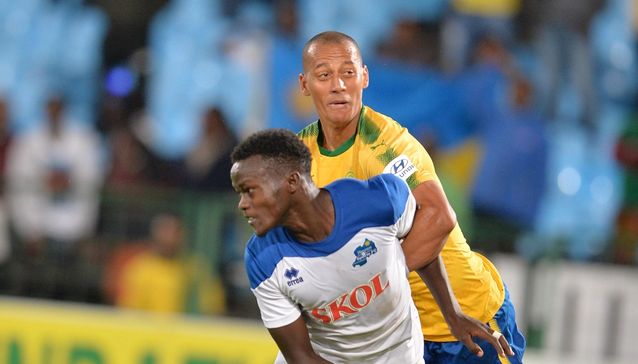 The Rwandan outfit Rayon Sports were eliminated from the CAF Champions League as they dropped down to the Confederation Cup after losing 2-0 to Mamelodi Sundowns at the Loftus Versfeld Stadiumon Sunday night in Pretoria.

The win, combined with the 0-0 draw in the first leg, enabled the Brazilians to sail through thanks to a 2-0 aggregate victory.

The Blues got off to a flying start and almost scored in the fifth minute when a loose ball fell to Shaban Hussen 16-yards out, but he saw his thunderous drive superbly stopped by Sundowns keeper Denis Onyango.

Sundowns quickly found their rhythm after that and should have taken the lead in the 19th minute when Themba Zwane worked his way into the box from the left and squared for Gaston Sirino, who fired over from just yards out.

A minute later, Percy Tau came within inches of finding the back of the net but his 22-yard curling effort shaved the wrong side of the post.

Sundowns were rewarded for their pressure in the 34th minute when Wayne Arendse volleyed home from six-yards out after meeting a pin-point corner-kick from Tau, 1-0.

In the 39th minute, Tau was afforded the perfect chance to double his side’s lead when he broke behind the Rayon defence, but he was brilliantly denied in a one-on-one with the keeper.

Sundowns took a 1-0 lead into the break.

The Brazilians continued to pile on the pressure after the break and found their second goal 10 minutes into the second half when a long-range shot from Sirino was pushed onto the crossbar by the keeper, but Sibusiso Vilakazi was quickest to react as he headed home the rebound, 2-0.

In the 67th minute, Tau should have put the result beyond doubt when Sirino slipped him through on goal, but again the former was thwarted in a one-on-one with the keeper.

Rayon Sports threw players forward after that as they tried to find their way back into the match, but the Sundowns defence stood firm.

The Blues were reduced to 10 men late on after Caleb Bimenyamina saw red for a two-footed challenge on Tebogo Langerman in added time, but by then, Sundowns were home and dry as the won the tie 2-0 on aggregate.

The Rayon gaffe was very critical of the referee for not sending of Gatson Sirino in the first half.

“I think we saw two good teams, except the officiating was very poor. I think the first half, they should’ve had a red card for slapping an opponent,” Minnaert told SuperSport TV.

“The ref was two metres away from the action, but only gave a yellow and for slapping it’s always a red. Also, Tau should’ve got a second yellow in the second half so it was very poor officiating. But for the rest, I’m satisfied with what my team has done.”

“We conceded two goals as a lack of experience and this happens against a very experienced team like Sundowns.

“But I think we showed we tried to play and do something and the result is not what I expected it to be but it’s football,” he said.

The loss will see Rayon Sports compete for a Confederation Cup group stage slot when they compete in the play-off round in the first week of April.