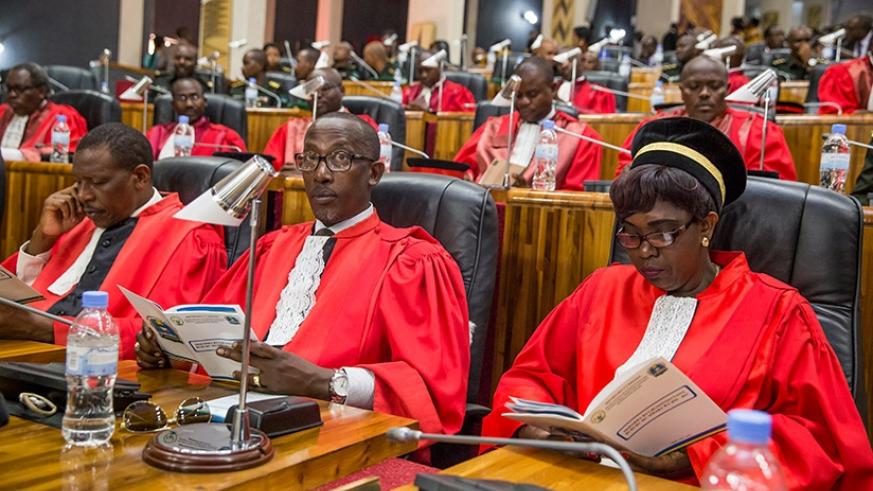 Judges during an event to start judiciary year

Rwanda has introduced a new system which will limit the work log in the Supreme Court, cutting the time a case spends in court.

An appeals court has been added in the judicial system. Inserted in between the high court and Supreme Court, this new structure is expected to transform the whole system for the better.

“This court will be in the high court to handle most of the appeal cases. The Supreme Court will be reserved to only handle cases which have national and community and justice impact,” said Justice Minister Johnston Busingye during a press conference, May 29.

By 2012, it took at least 66 months for a case to start being heard in the Supreme Court which has since been reduced to 20 months.

In the high court this has dropped from 11 months to three months in the same period, as a result of judicial reforms.

Busingye said that only a few cases will be able to reach Supreme Court, as part of the continued process of reforms in Rwanda’s judiciary system which started back in 2004.

The minister said that plans are still underway to overhaul the court system as a way of boosting court operations to be more productive and efficient.

Currently there are 60 courts in these categories and the ministry of justice says that there is plan to combine some of the courts and cut them down to 41.

Since the 2004 reforms in judicial system, Rwanda has managed to connect most of the courts to the internet enabling citizens to submit their cases online and get a case file immediately.

In the last five years (2011-2016), the backlog of cases decreased significantly and so did the average time taken for a case awaiting as a result of establishment of Houses of Justice (MAJ) and mediation courts which handle cases with a value not more than Rwf5million.

Rwanda’s strategies and reforms have yielded significant results, such as the level of divergence in court decisions on similar facts and the same legal issues kept on decreasing.

The confidence and trust people have towards Rwandan courts also increased.

This was proven by a study conducted by Rwanda Governance Board, in its report, Citizen Report Card; 2015 which indicated that people have confidence in courts to the level of 88.2%.

It was confirmed by International reports such as World Economic Forum, Global competitiveness Index 2015-2016.

This report ranked Rwandan Judiciary 26th among 140 countries assessed worldwide; the 2nd place in Africa after South Africa and the 1st place in East Africa regarding independence.

However the Chief Justice, Prof. Sam Rugege said in March 2018 during a judicial retreat in Rubavu district that Rwanda needs contribution of citizens in fighting graft in courts and more investment in the justice sector especially in scientific evidence to speed up cases trial timelines.