Tomorrow, August 9, 2018, all eyes will be at the Parliamentary building in Rwanda’s capital Kigali.

30 district Mayors from across the country will report in the presence of the Head of State, their performance for the 2017/2018 that has just concluded. It is ‘Imihigo’ day.

The event, traditionally known as Guhigura Imihigo is rooted in Rwandan culture where the community had to present before the supreme authority of Rwanda the tactics they use to fight for the country sovereignty.

In this early practice, the best fighter would be allowed to drink from ‘Inzoga y’Abagabo’ – a reward of the brave.

In the current context, 30 district Mayors convene at parliamentary building and pledge before the president to achieve a specific and quantifiable number of activities within a year, in the public interest.

At the same time, they present a report of what they achieved in the previous year, and the best is rewarded, while the worst is corrected.

KT Press spoke to Provincial Governors to pre-empty their feelings ahead of the D-day. Unfortunately, both Governors of the South and West did not respond to give their anticipations ahead of the event.

For East and Northern Province Governors, expectations are high – given much-needed efforts they have put in guiding, supervising and equipping district mayors and their team what needs to be done to achieve targets.

Despite recent turnovers in some districts which experienced massive resignations, both Governors Fred Mufulukye (East) and Jean Marie Vianney Gatabazi (North) agree on one common point; results on ground.

For Governor Gatabazi, he expects the entire 5 districts he supervises to be among the top 10 districts in this year’s Imihigo.

“I took over my new duties at the start of Imihigo and we had witnessed good results especially in Musanze district which had emerged number two in the previous Imihigo. What we did was to tell Musanze to emerge number one or two,” he said.

In the previous performance contracts, Northern Province had 4 of its 5 districts come in the top ten districts. These were Musanze (2), Gakenke (4), Burera (8) and Gicumbi (10).

Governor Gatabazi says that one of his districts – Rulindo, emerged among the last (29) in the previous performance contracts.

“I called for a meeting and expressed disappointment on how Rulindo district which previously came in the top ten had emerged the last. We looked at where things went wrong and corrected errors made,” he said.

“We believe Rulindo district will emerge the best. Our expectation is to see all our districts come in the top ten.”

Governor Mufulukye whose Province had 3 districts in top ten, including Rwamagana which emerged the overall winner, believes in the results seen on ground – leaving the rest in the hands of evaluators.

“I might say something which the results might not reflect. But we believe that Imihigo is something that puts us on tension because at the end of the year, you know you are going to be evaluated. So you work hard to ensure you get the best results,” he said.

But one thing would make Governor Mufulukye uncomfortable. “The 7 districts that I oversee, coach, supervise, advocate for and give all my support…if these guys fail, it is an indication that I also failed.”

However, Governor Mufulukye has confidence in his districts. “I know they have done a good job but other districts were busy working as well,” Mufulukye told KT Press.

Along the year, a lot happened across the districts of the country.

In the last financial year, construction of Bugesera International Airport (BIA) was launched by President Paul Kagame and first phase is expected to be completed in July 2019.

A new highway, Kicukiro-Bugesera that will connect the new airport to the capital city got funding from People’s Republic of China and will start soon.

In the same Eastern province, rehabilitation of Kayonza –Kagitumba road, one of the busiest roads of the country and Kayonza – Kirehe road started and are near completion.

The four star City Blue Epic Hotel in Nyagatare was inaugurated becoming the province’s mega project in the hospitality industry. This was also followed by the inauguration of Gatsibo district hotel-Akagera resort and country club.

As far as infrastructure is concerned also, in Northern Province, achievements are sounding.

The much-awaited Burera-Rukomo-Base highway is also under construction and will be completed in a near future.

In Southern province, the 2018 Imihigo come with good news. Construction of the much awaited road Huye-Kibeho-Munini will start in September this year.

Despite these achievements however, the wellbeing of Rwandans is still work in progress.

At several occasions, local leaders were rebuked over failure to end poor hygiene and provision of basic needs for citizens.

Stunting is also still a big challenge among children under 5. Latest figures showed that it stands at 38% on national level.

In several districts, imihigo will be signed by a new mayor after a number of resignations since the last three months or so. 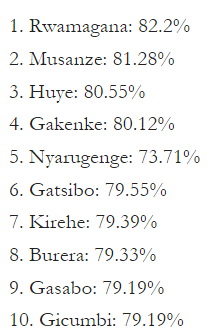 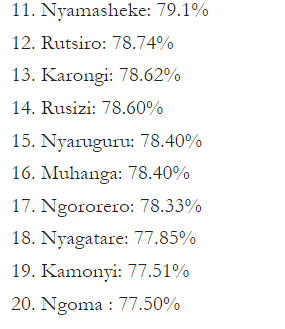 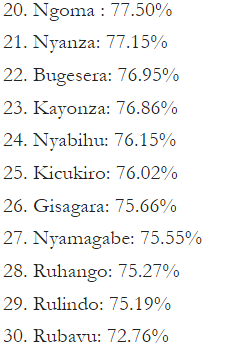