Francophones or not, young and adults from all works of life provided that they know Rwanda’s Minister of Foreign Affairs Louise Mushikiwabo, have expressed their sentiment of appreciation following her election to the top position of the International Organization of Francophonie(IOF) on Friday.

Most excited are Rwandans, including those who were never heard speaking a French word before, or had barely shared quite a few thoughts in “La Langue de Molière” – the other nickname of French language.

Others reminded of their talents in this language which, some had thought is fading in Rwanda.

It was all French in Rwanda, even in the English media outlets.

No wonder, high officials of the country who have been supportive through the campaign were the first to say congratulations to Mushikiwabo, all using French.

“Thank you so much for African brothers and sisters who supported us and all the countries of Francophonie who put their trust in us,” a tweet President Paul Kagame wrote in French reads.

“It’s a historical moment for all Rwandans and Africans. It once again indicates that there is no indomitable challenge for a resolute African Union. Congratulations to you Louise Mushikiwabo,” the second tweet, also in French translates.

Mushikiwabo was endorsed unanimously by IOF member countries after being presented by president Kagame as Rwandan and African candidate. 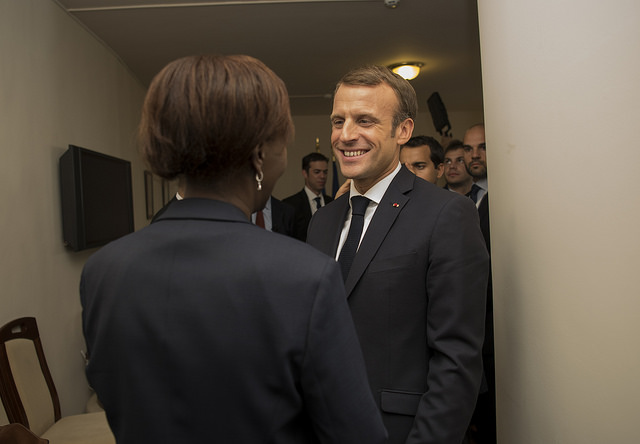 The First Lady of Rwanda Jeannette Kagame also expressed her best wishes to the new secretary general of IOF.

In a poetic style, the First Lady who is known for her love for literature wrote in French.

“Go, pretty ‘Imbuto’(seed) of the ancestrals’ country, Go, African daughter. Continue to carry the ‘Agaciro’ torch at the heart of Francophonie”, the French message goes.

All the messages were quite beautiful, but Mushikiwabo was not able to hold her emotion in front of the message of the First Lady.

“This message of the First Lady of Rwanda is a real balm in heart at the end of a very busy day full of emotions. Thank you so much First Wacu,” Mushikiwabo wrote.

The dome of Rwanda’s iconic building – Kigali Convention Centre lit the colours of Francophonie in support of the new leader.

At the international scene, the sentiment was the same. Moussa Mahamat, the Secretary General of the African Union Commission said “It was with pleasure and gratitude that I received the election of Louise Mushikiwabo at the helm of IOF.”

President Emmanuel Macron of France, Minister Justin Tredeau of Canada where the outgoing secretary general comes from, also shared the same sentiment and so did other heads of state and of government.

In her inaugural speech as Secretary General, Mushikiwabo was very thankful to the Francophonie community.

“I did, as I like to say it, the world tout in two months and a half to gather your ideas and expectations. It was a crucial process in the construction of our common project because I firmly believe in a secretariat in the service of member countries,” she said.

“The meetings gave me courage and the zeal to put in good use this term.”

Mushikiwabo said, during the meetings, some countries shared their confidence that, with her, the Francophonie will go very far, but others, “shared their concern, that French language is fading in their community, a reality which affects many countries.”

The new secretary general said, “I am looking forward to giving importance to French in the multilingual world because I am convinced that French has its place in the middle of other languages and for the good of the world.”

Her confidence to face challenges the Francophonie is facing is based on her experience in diplomacy.

“Ladies and gentlemen, the nine years that I have spent at the head of the diplomacy of my country-Rwanda, I learnt to find concrete solutions to problems,” she said.