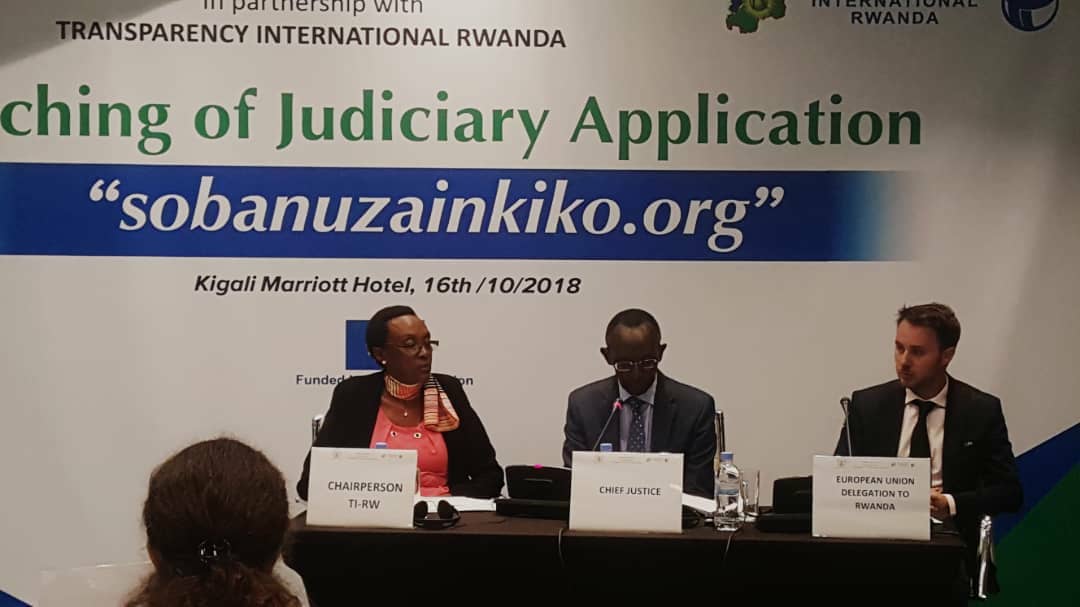 Prof. Sam Rugege(midle) the chief justice and TIP’ Ingabire Immaculee and the European Union representative at the launch of a new portal to file complaints to courts in Kigali-October 16

Rwanda’s Supreme Court in Partnership with Transparency International Rwanda have jointly launched a Web and SMS- based tool for monitoring service delivered by courts and tribunals in Rwanda.

For several occasions, citizens have been complaining of injustices in Court procedures – pointing fingers at judges for taking cynical decisions during court verdict.

Marie Immaculee Ingabire – head of Transparency International Rwanda agrees with citizens that corruption has in many occassions dictated court procedures.

“You see a judge has all the authority and independence to take a decision during court procedures. At some point, he can take a decision based on personal sentiments. This tool will expose all this,” she said shortly after the launch of the tool at Marriott Kigali on Tuesday, October 16.

Accordng to Chief Justice Prof. Sam Rugege who launched the Web and SMS tool dubbed “Sobanuzainkiko.org”, acknowledged that several verbal complaints of injustice have been raised by citizens.

However, “It was hard to find a proper chanel where they can clearly raise their complaints. But this system comes as a solution,” he told KT Press.

The tool was developed under promotion of equitable justice in the country through improved aid and legal awareness services to detainees and prisoners.

But on another hand, it will serve as a channel for citizens to submit injustice cases to courts and tribunals.

Once submitted, the cases will be accessed by the judiciary, National Public Prosecution Authority; the Office of Ombudsman and Rwanda Bar Association to jointly handle complaints submitted to them by citizens.

This will involve the whole process to revise judgements vitiated by injustice by all parties as stipulated by article 54 of the law no.30/2018 of 02/6/2018 determining jurisdiction of courts.

At the moment, the toold is not yet out for stakeholders to apply it. Supreme Court and Transparency have organised a countrywide dissemination campaign to bring the system down to citizens.

Financed by the European Union Delegation to Rwanda, Chief Justice Prof. Rugege said that such a system is part of a long-term plan of transforming “Our justice system since 2004.”

In March this year during judicial retreat in Rubavu district in Western Province, Chief Justice, Prof. Sam Rugege said that Rwanda needs contribution of citizens in fighting graft in courts and more investment in the justice sector especially in scientific evidence to speed up cases trial timelines.