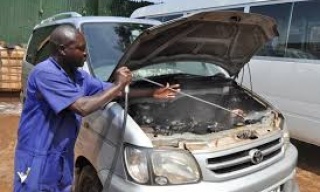 Former government drivers are currently in a court battle over unaccounted financial transactions, undocumented expenses and incomes which are said to have been done by one of their representatives.

Abacu association was formed in 2005 after government laid off hundreds of its employees with financial and education packages as part of the send away appreciation after introducing the zero fleet policy.

After few years of failed operations by the association and subsequent dissolution, five of the association members decided to form a registered company – Abacu mcof  Ltd which also came at a time when government policy encouraged self-help groups to create companies.

Since its establishment in 2011, the company, which deals in carwash services, managed to secure a vehicle cleaning service tender with Rwanda’s Ministry of Finance and Economic Planning (Minecofin) and the National Institute of Statistics of Rwanda (NISR).

Apparently, lack of administrative structures in the company has led to a commercial case in which one of the shareholders has sued its top manager – Albert Majyambere, the company CEO over misuse of funds and failure to pay dividends.

Christopher Basita one of the shareholders alleges that Majyambere has withdrawn company incomes in millions and that the company register which has all cars and income data has disappeared.

“My client managed to secure one of the registers which has a three years entries, but he has not been paid his dividends which are supposed to be shared annually after all expenses,” said Me. Epiphany Karangwayire the plaintiff’s defense lawyer during a court hearing at commercial court on Tuesday.

The defendant’s lawyer, Theresa Iyakaremye responded saying that the plaintiff has submitted a confusing case file in which he claims separate amounts of money in millions but doesn’t specify which money the plaintiff was claiming or how much he wasn’t paid.

“He claims Rwf38 million but the case file has Rwf34 million and Rwf16m- which of these are we talking about?” lawyer Iyakaremye asked.

Listening to arguements from both sides, the presiding commercial court judge said she was confused about the amounts and wanted a clear picture of the company’s income, expenditure and transactions.

“Either the plaintiff or the defendant should be able to show us what amount we are following up. If it’s the incomes that are not accounted for, how they were not spent well and how much they are claiming or able to show – but in figures,” the judge said.

Court also ordered both sides to do a private financial audit with an expectation of both paying the auditor an upfront payment and the loser meeting the total cost at the end.

The court said, this audit will help to get a clear financial picture for further rulings.

Abacu mcof was formed by Basita alongside four former government drivers- Albert Majyambere, Uzziel Kayiranga, Raphael Musafiri, and Gerald Ntagungira (deceased) and Basita claims that the latter’s wife has not been informed of her husband’s dividends as a company shareholder.

Both sides will on December 11, 2018 reappear in the commercial court – which is currently handling its business in Kimihurura as completion of the new commercial court building in Nyamirambo gets underway.