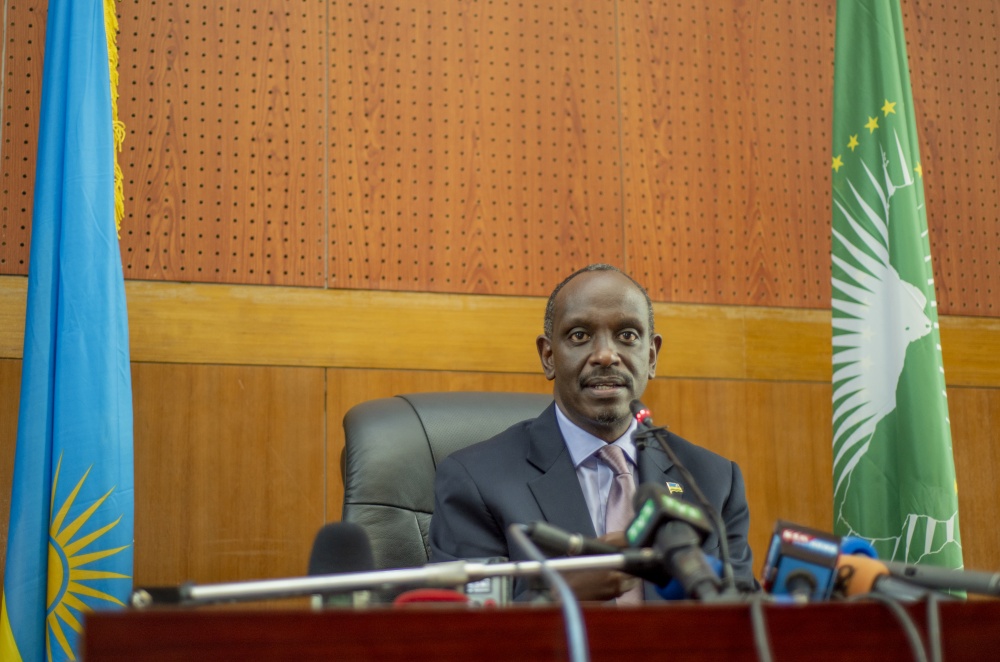 Rwanda has been willing to normalize relations with the neighbouring countries, but they are refusing to reciprocate which undermines sustainable peace in the region, says Richard Sezibera, Minister of Foreign Affairs and Regional Cooperation.

Sezibera was addressing the media on Tuesday and said that relationship between Rwanda and Burundi is still bad.

“Relations between Rwanda and Burundi is not good for reasons that are not our making. Burundi sometimes tends to involve us in their problems, but, as far as we are concerned, if they come to us, we shall be happy to normalize,” Sezibera said.

“For Rwanda and Uganda, relations are not that good for reasons that you know and we are not responsible neither; some Rwandans are threatened at the other side, other issues are caused by people tending to harm our country’s security.”

During a press conference at Ministry headquarters on Tuesday, some journalists suggested that Rwanda should take the lead and talk to the neighbours, to initiate talks that would lead to the normalisation of relations, but Sezibera said efforts were futile.

“We are willing, but if someone closes the door, you cannot break their door. But on the other hand, if anyone knocks on our door, we shall open.”

Apparently, every other day, there are signs of hostilities. Of recent, the media in Burundi alleged that two bodies were identified in Lake Rweru which flows between both countries, and they alleged that they were “from Rwanda.”

“It sounds stupid. When a Rwandan dies here, families organize a burial, but his/her body is not left to be carried by water,” he said.

For Uganda, the media which was meeting Sezibera for the first time since his appointment, tried to find out whether the latest visit of Uganda’s Foreign Affairs Minister to Rwanda yielded some results.

“He was bringing a message from President Museveni to his Rwandan counterpart Paul Kagame. I hope you won’t ask me to tell you the message between heads of state,” Sezibera replied.

In this same context of talks, Sezibera denied news that Rwanda held talks with South Africa where the later agreed to extradite renegade General Kayumba Nyamwasa this month.

“There has never been such discussions. Only, presidents of our countries met and agreed that their foreign affairs ministers should meet for normalization of relations. We shall do that, we shall meet, otherwise I don’t know anything about Kayumba Nyamwasa and other people on the run,” Sezibera said.

“There are a number of issues we shall raise with when we meet. There are issues to discuss between governments, rather than the media.”

Of recent, it was alleged that some unknown associations of Rwandans which label themselves as political parties have been asking to hold talks with government of Rwanda, but Sezibera discredited this appellation Rwandan ‘political parties’ from abroad.

He said that otherwise, “every Rwandan who wants to talk with fellow Rwandans can attend existing fora, including the forthcoming national dialogue – umushyikirano.”

Meanwhile, Sezibera said that relationship with Democratic Republic of Congo is good.

“We have good relationship with current government and we wish to sustain it as we solve some remaining issues.”