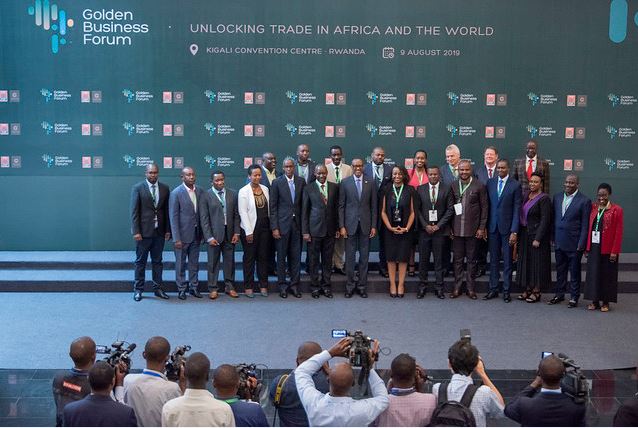 The African Continental Free Trade Area (AFCFTA) is now on stream, and from July 2020, Africans can start trading under its rules. With the inaugural launch of the Gold Business Forum, Rwanda’s Private Sector Federation (PSF) is first out of the blocks, as an early adopter.

“We had three main objectives for launching the Gold Business Forum” said, PSF spokesman, Theoneste Ntagengerwa, “to raise awareness within the Rwanda business and entrepreneurial community, about the opportunities that will come with the AFCFTA, help them to network with their peers around the world, and explore ways to best help both Rwandan businesses and foreign businesses investing in Rwanda, to take advantage of the great opportunities that will be opened up by AFCFTA.”

The PSF can be well pleased with their initiative. The take up rate was beyond their expectation. They had planned for around 500 visitors from across Africa, Europe, Asia and the Middle East, and found themselves catering for over 700.

Responding to PSF chairman, Robert Bapfakurera, guest of honour and key note speaker, President Kagame, committed himself to continue his support of the private sector in general, and the PSF in particular. Raising a laugh from the audience, he assured the PSF chairman, “since you offered an open invitation, I promise to be a regular attendee of the forum, both while in this office, or outside of it, if the invitation remains open.”

The President welcomed the many foreign visitors, especially the Chinese, who brought a particularly large delegation. “Please feel at home and come back often” he told them.

And come often they will. The PSF plans to make the Gold Business Forum an annual event, and they have high ambition for it. “We believe Rwanda is ready to be a centre from which investors, businesses, can take full advantage of the opportunities that will come with the AFCFTA. Rwanda has the legal framework, it has one of the most business friendly environments on the African continent, if not the world, and of course we have the peace and stability that every business needs. We will be happy to offer any facilitation they need. As the President said, they should come to Rwanda, and feel at home”, said Ntagengerwa.

The AFCFTA comes at a time when the role of the private sector is more recognised than ever before. “The role of the private sector is absolutely central to Africa’s transformation” said President Kagame, in his address “for too long, development was seen as a task of government and NGOs. Business was rarely included in the conversation. That attitude held us back, as Rwanda, and as a continent. But, a decisive shift has been underway. Over the past fifteen years, African countries have been among the strongest performers on the World Bank’s doing business, business leaders now participate regularly in African Union summits in a meaningful way.”

As last year’s outgoing chairman of the African Union (AU), a role he combined with leading AU reforms, President Kagame was first among African leaders driving forward the signing, and ratification of the AFCFTA. He expects the agreement on free movement of people to be ratified sooner than later. “the protocol for free movement of people has been signed” he said, “and the ratification process is underway. Once in effect, Africans will no longer require a visa to travel within Africa, among other rights.”

“Actually people are moving” he added, “they move across borders whether you give them visas or not…and some of these people are brothers, and sisters, only that they live on opposite sides of what is known as the border. So it’s up to us the leaders, mainly political leaders, to make it easier for all of us, because in the end we all benefit, without exception.”

At the end of a full day that begun at eight in the morning, the visitors were driven to the Rwanda Patriotic Front’s (RPF) headquarters in Rusororo. There they stepped off their vehicles to the sound of live drummers, and waiters bearing drinks. In the gardens of what has become known as the Ntare Conference Arena, with its water fountains, the guests networked, and watched traditional dancers, until dinner was announced.

The Minister of Trade, Ms Soraya Hakuziyaremye was the evening’s honoured guest. After her remarks, she was asked to award prizes to outstanding members of the PSF, and witness the signing of a new partnership between a Chinese textile company, and a Rwandan women’s clothes making business. Formalities concluded, everyone was invited to let their hair down, to live music.

The PSF hope for the participation of the AU, and the World Bank at next year’s event, which is just as well, it will be a challenge to equal the success of the inaugural event.