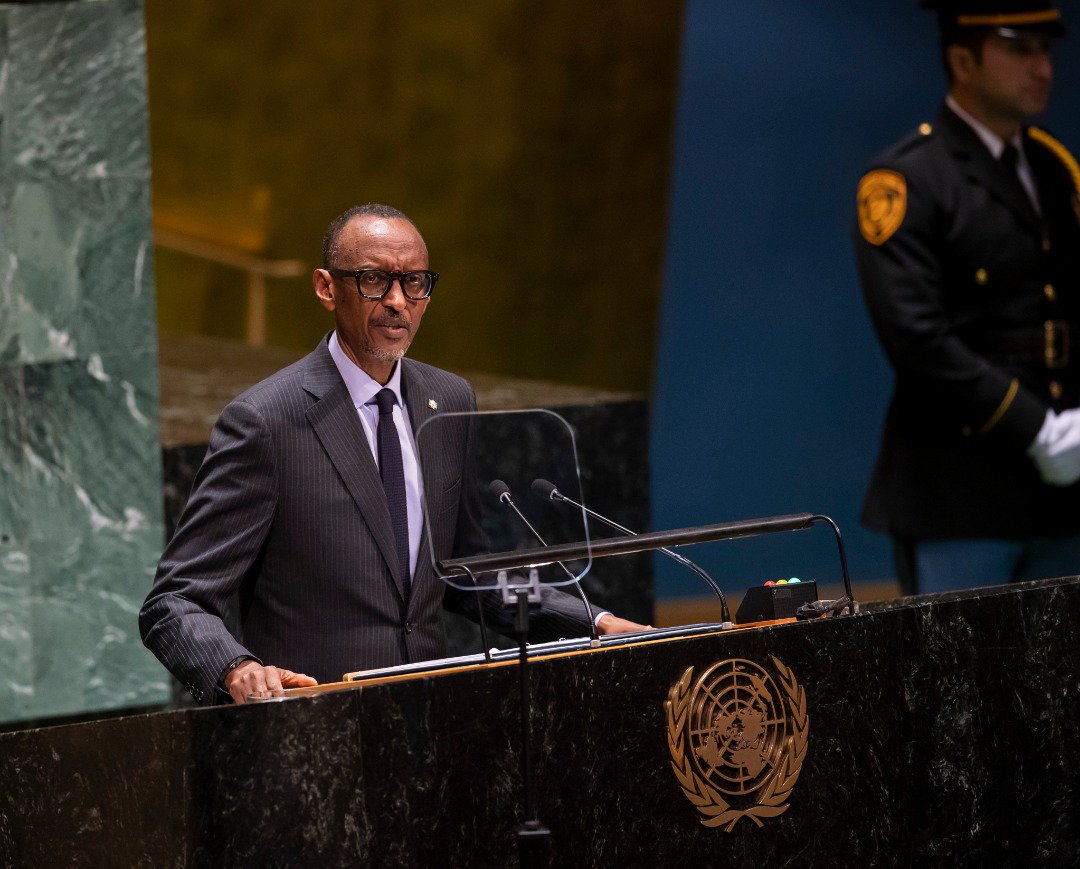 President Paul Kagame on Tuesday said that Africa is ready to play her role in addressing global challenges such as global inequality and others which affect the continent directly, which can only be addressed by working together.

In his speech, President said the international community stands at a crossroads because the next decade could be remembered in history as a turning point, or as the moment when multilateralism lost its way, highlighting some of the key milestones that will set the momentum ahead.

“Fortunately, the path forward is clear. Never before have we had such well-defined road-maps for joint action on development, climate change, and global health,” President Kagame said, citing the Universal Health Care and Climate Action declarations adopted this week as key steps.

“The transformational potential of Universal Health Coverage is now at the top of the global health agenda. This is thanks to the outstanding leadership of the World Health Organisation and many other stakeholders,”

“In Rwanda, more than 90 per cent of the population has insurance coverage. This has contributed to significant improvement in health outcomes. It shows that it is possible for countries at every income level to make health care affordable and accessible for all,” President Kagame said. 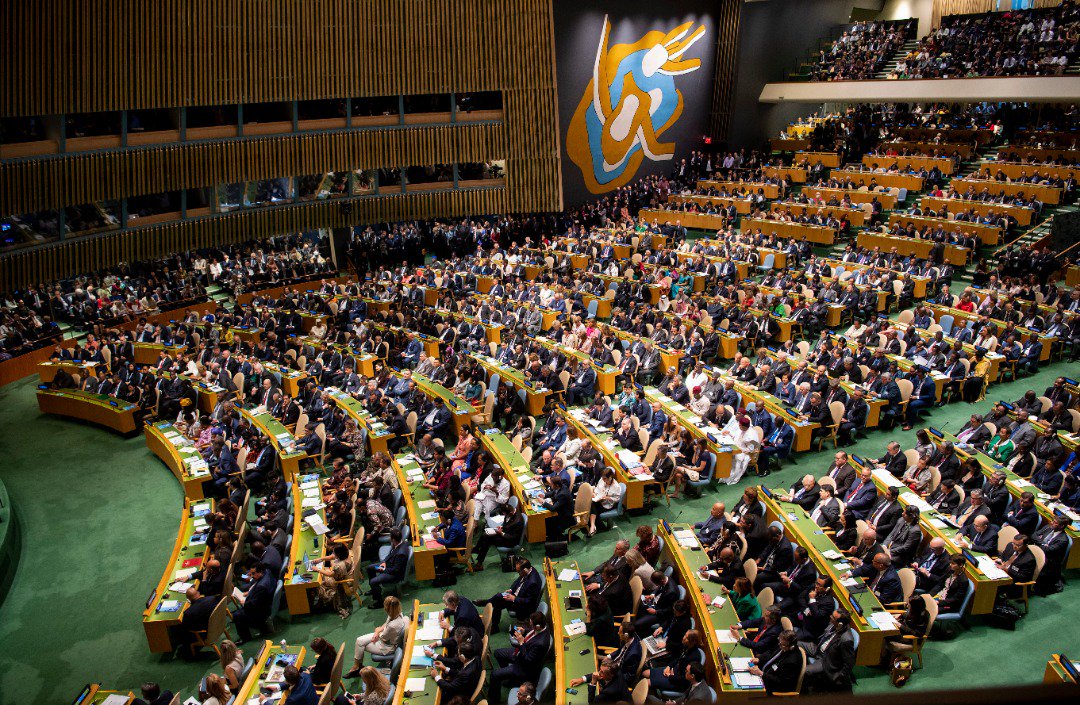 The Head of State called on global leaders to commit to replenishing the Global Fund, and Gavi, the Vaccine Alliance, which he said that are key initiatives which need to be sustained, not only for Africa’s sake but rather for their global importance.

President Kagame said that the 2030 Sustainable Development Goals (SDGs) are also Africa’s goals which the continent is determined to achieve, pointing out that the means are available and it is everyone’s responsibility.

He noted that the African Union continues to strengthen its capabilities and effectiveness, citing the African Continental Free Trade Area (AfCFTA), which the continent will begin to trade under next year as one of the key developments to note, but pointed out that Africa continues to lag behind other regions on SDGs.

“This is despite the fact that our continent is home to several of the fastest-growing economies in the world. Growth must be fully inclusive, so that inequality within countries continues to diminish,”

“The fundamentals needed to unlock this transformation are already in place. With a concerted push, involving all partners, including the private sector, it is indeed possible to make up for lost time with the Sustainable Development Goals,” he said.

President Kagame said that closer cooperation between the African Union and the United Nations is streamlining the implementation and measurement process of SDGs, adding that the partnership will continue to grow deeper.

“All around us, we see the urgency of fulfilling our commitments to slow the pace of global warming, and adapt our infrastructure to a changing climate,”

“One key lesson of yesterday’s Climate Action Summit is that innovative technologies and approaches allow us to act without slowing economic growth,” the Head of State said in his address, urging countries to take action and ratify and fully implement the Kigali Amendment to the Montreal Protocol. 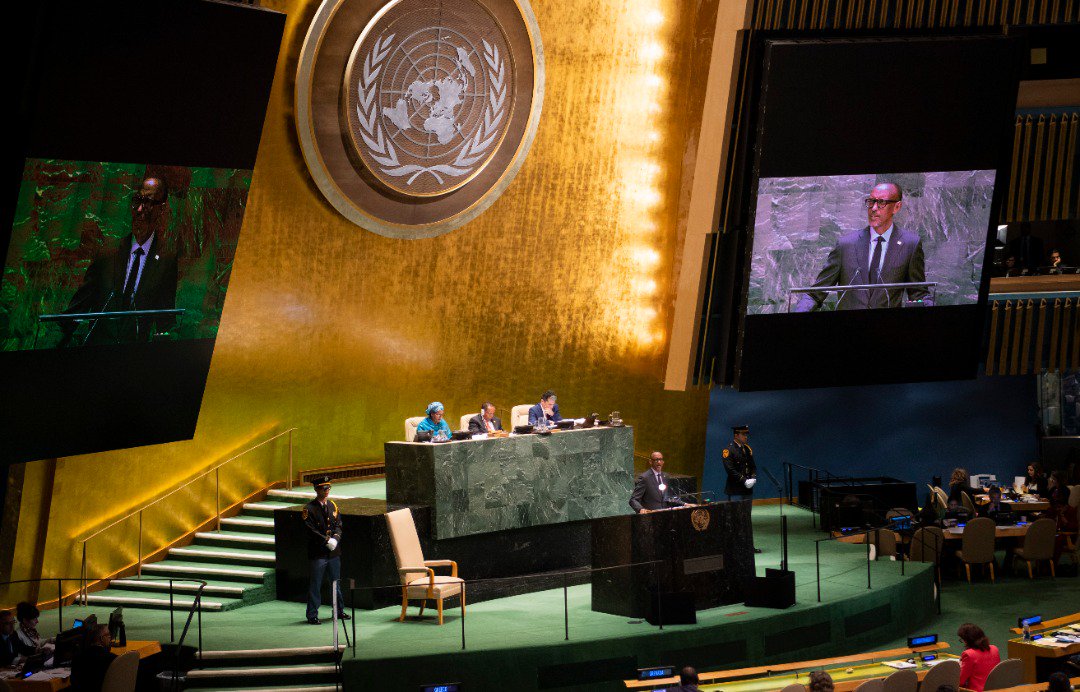 President Kagame also made a case for security and stability which he said are prerequisites for rapid progress toward a more equitable and prosperous world.

“It is essential for Africa and the rest of the international community to work closely together on peacekeeping and peace building efforts with mutual respect,”

“In the coming weeks, Rwanda is preparing to receive and protect a number of refugees and asylum-seekers from detention camps in Libya. The support of the United Nations High Commissioner for Refugees, and the African Union, is greatly appreciated,” he said

The Rwandan leader said that the partnership with the UN and other international partners in the effort to repatriate African refugees in Libya is a clear sign that cooperation with the continent to address complex problems is possible.

“Africa itself is also a source of solutions. There is no doubt that the challenge of global inequality can only be addressed by working together,”

“Rwanda stands ready to do our part. That includes guaranteeing the rights and opportunities of women and girls. I therefore take this opportunity to invite you to Kigali in November for the Global Gender Summit,” he concluded.