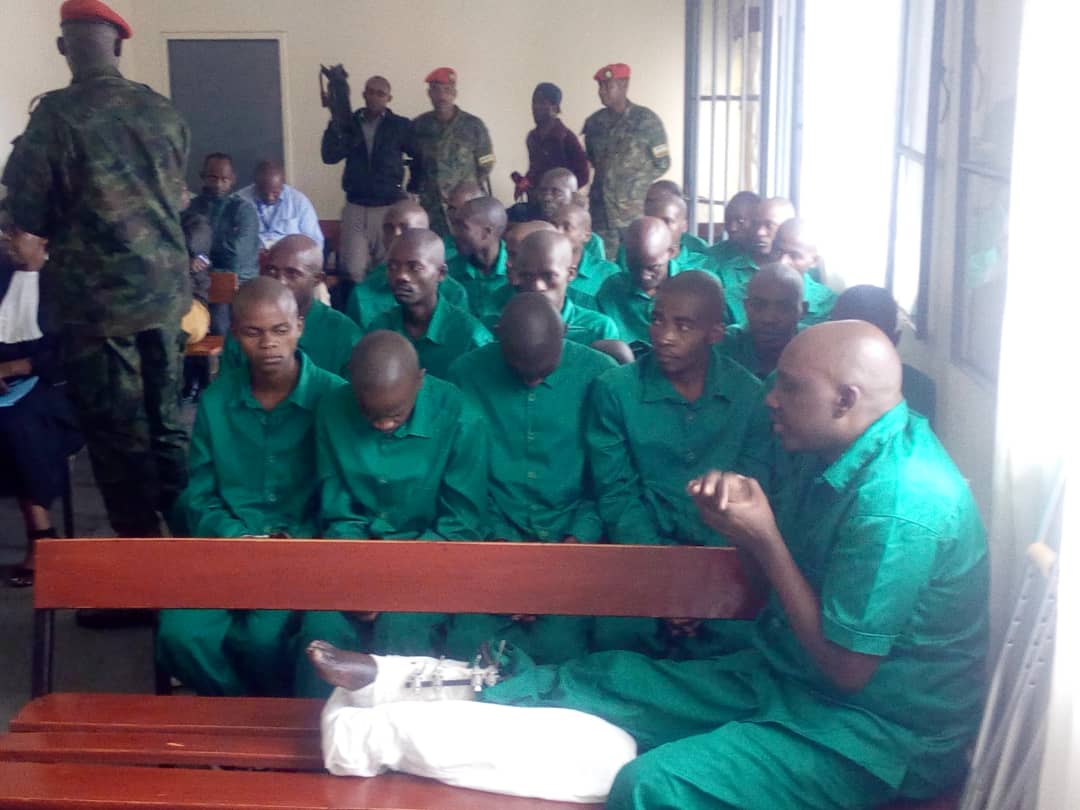 Following an earlier stalemate between Prosecutors and Lawyers on whether the Military Tribunal has the competence to try 25 militias linked to Rwanda National Congress (RNC), Judges ruled on Monday evening in favour of Prosecution, stating that the court has the jurisdiction to try the individuals.

There was a stalemate earlier in the morning as the duo of lawyers of Paula Umulisa and Aphrodis Musabyimana raised concerns of the 25 not being members of the military, which makes it illegal to try them in a military tribunal.

The pre-trial hearing was adjourned to the afternoon as judges at the Military Tribunal in Nyamirambo went into a retreat to review the submissions of Prosecutors and Lawyers as well as the ‘linked file’ before they could decide on the way forward.

Prosecutors maintain that the case of the 25 combatants linked to RNC, who were arrested by Congolese government forces and handed over to Rwanda, is linked to another case involving individuals in military service including Private Dieudonne Muhire and four others, which is ongoing.

Lawyers had argued that the 25 were not members of the military at the time of their arrest and that Major (Rtd) Habib Mudathiru also retired from the army, making the entire group ‘civilians’ by status, who should be tried in a civilian court.

Judges led by Lt Col Charles Asiimwe Madudu however dismissed the argument of the lawyers, indicating that the military tribunal has the jurisdiction to try the case, after it reviewed the file of Private Muhire and co.

“As stipulated in Article 94 of Law N°30/2018 of 02/06/2018 determining the jurisdiction of courts and on Article 99 of the same law which talks about connexity, court found that the case involving Maj (Rtd) Mudathiru and his co-accused is connected to that of Private Muhire Dieudonné and his co-accused,”

“Both cases are linked to Rwanda National Congress and the coalition P5,” judges pronounced in a short decision, adjourning the pre-trial hearing to October 18.

The pre-trial hearing of the 25 people who were arrested in an operation by Congolse government forces in an effort to eliminate negative groups from the Eastern part of the Democratic Republic of Congo (DRC) before handing them over to Rwanda, was adjourned two weeks ago to allow the suspects to get lawyers.

The Military Tribunal that had adjourned it for that matter first ascertained if all the suspects have lawyers only to find that six of them had the lawyers but were not present in court while one of the suspects said he could manage without a lawyer.

Prosecutors and one of the lawyers argued that the hearing could not take off if all the suspects were not present but another group of lawyers and the remaining suspects said they would be willing to proceed with the hearing –a decision which the Judges had backed but more impediments regarding the competence of the court emerged.

Prosecutors maintained that there is a case involving a one Private Dieudonne Muhire and 4 other serving soldiers which is linked to Maj (Rtd) Habib Mudathiru.

Judges had said they hadn’t seen the file which is connected to the case but Prosecutors said they had uploaded it in the system, which prompted the bench to adjourn the hearing to first review the file and make a decision.

Mudathiru, who retired from Rwanda Defence Force (RDF) at the rank of Major, also said that he does not know Private Muhire and his four co-accused.

Lawyers argue that if the files have not been linked in the process, then the Military Tribunal has no jurisdiction to try the 25 who are all not members of the military.

Despite appearing in court in civil attires previously, this morning, the suspects appeared in green uniforms of military inmates and were brought in amid tight security.

Advance military police motorcycles, inmates van blaring with sirens and an RDF bus carried the suspects in and out of court, while Maj (Rdt) Mudathiru, who is seemingly still in pain after he was injured in the fighting in DRC where he was captured, was assisted by military police personnel to walk.