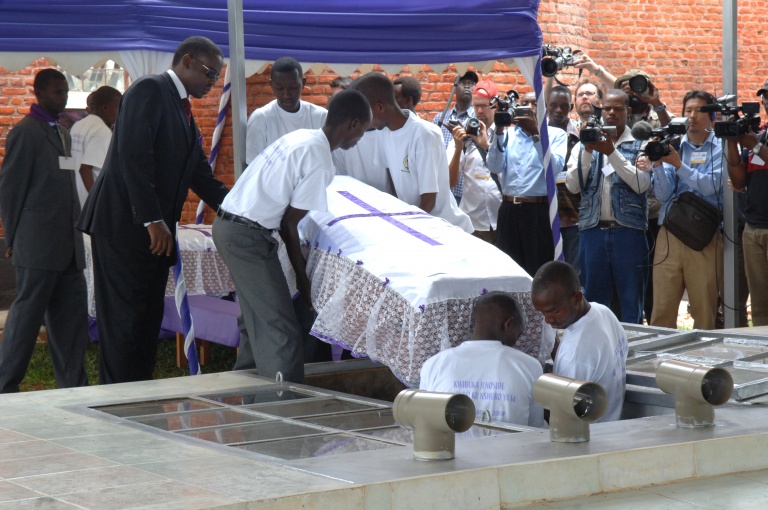 Mourners give a decent burial to genocide against Tutsi victims

Twenty five years after the Genocide, Rwanda is yet to burry in dignity all the victims of the 1994 Genocide against Tutsi which cost lives of more than 1 million Tutsi.Reason? Killers are reluctant to show mass graves where they dumped bodies. Since the wake of the 1994 Genocide against tutsi to date to get information from eyewitnesses and some perpetrators who confessed their wrong doing and indicated the whereabouts  of mass graves, Rwanda is now proposing a new technology that will help to discover the remaining mass graves.

The National Commission for the Fight against Genocide (CNLG) exclusively revealed to KTPress, it has budgeted to purchase the technology through a tender process in the financial year 2020-2021.

“We have already indicated that need in the next budget and we plan to buy, for starters, at least two machines each estimated at Rwf200m which can identify the remains underneath the earth surface,” Dr, Jean Damascene Bizimana, the CNLG Executive Secretary said.

This revelation was made after the commission, on Tuesday in Kigali, its report and action plan to both the Chamber of Deputies and Senate.

CNLG had earlier on received proposal on use technology similar to that used to identify victims of the holocaust of the Jews more than 75 years later, but couldn’t confirm the proposition immediately.

“We need this technology desperately. It could help in speeding up the process of having a decent burial for victims,” said Yvonne Mutakwasuku, the Vice chairperson of CNLG.

Some members of parliament however, suggested that Rwanda should never spend a coin on buying new technology to discover remains of the Genocide victims which happened on daylight.’

They say, there should be more efforts to bring the Rwandan community to speaking out, sharing information on the whereabouts of the genocide victims.

“If we have good report from the unity and reconciliation commission, why is it that we have to seek other alternatives like technology to unearth remains of victims? I think not a single penny should be spent instead Rwandans should be bold to speak out,” MP John Ruku-Rwabyoma said.

The parliament received the report and will discuss it in detail in its commissions, before it is submitted to both houses for final approval.

Through the years, a number of inmates convicted of genocide crimes have been able to provide some tips on whereabouts of remains, but CNLG said there are still more mass graves that are yet to be discovered.

For instance, a week ago inmates in Nyarugenge prison mentioned 76 mass graves, 29 in Gasabo, 24 in Kicukiro.

In September, remains of more than 100 Genocide victims were exhumed from a home in Rwezamenyo Sector in Nyarugenge District- an area where more than 200 people are said to have been killed.

And in May nearly 85,000 genocide victims gathered from around Kigali were laid to rest at the Nyanza Genocide Memorial