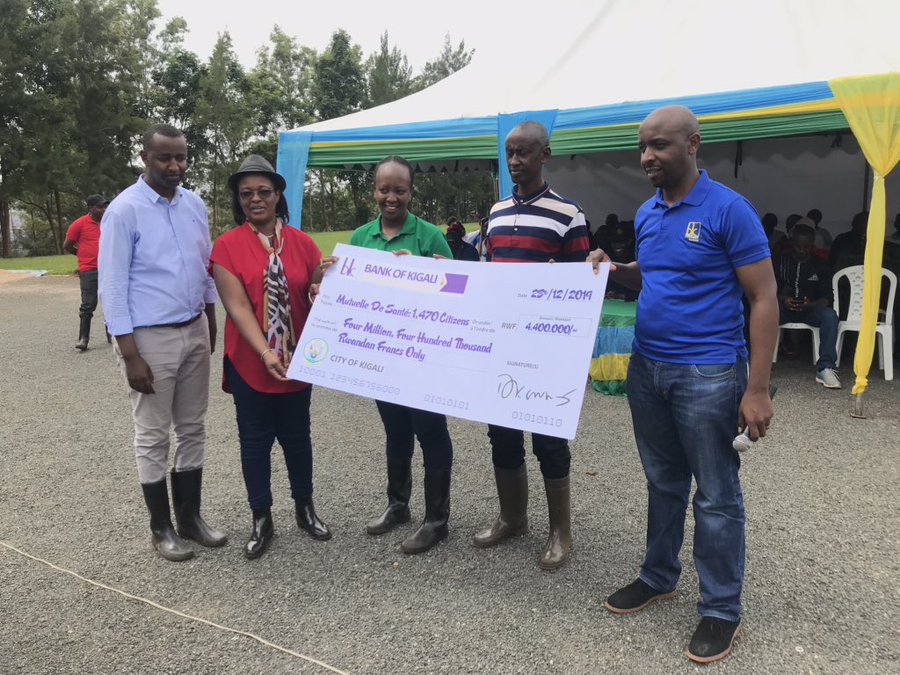 The Bank of Kigali (BK) Group has donated health insurance coverage for over one thousand citizens in the city of Kigali as part of the bank’s Corporate Social Responsibility (CSR) in the health coverage.

The BK’s donation worth Rwf4.4million was collected from contributions made by the bank’s staff to support 1,470 citizens in the three districts of Nyarugenge, Gasabo and Kicukiro in the city of Kigali.

BK Head of Branch Business, Bonaventure Ntabwoba, handed over a dummy cheque to the City of Kigali after a monthly community work (Umuganda) held in Rusororo sector in Gasabo district on Saturday.

Latest statistics show that so far,  73% of Rwandans have secured their community based health insurance for this financial year which started in June and ends in July 2020.

“Our objective is to support the vulnerable citizens so that they can have a healthy life and in future become part of a health clientele for the bank,” said Ntabwoba.

Nadine Mutoni Gatsinzi, the Kigali City vice Mayor in charge of Social Affairs said that the city has low numbers of health insurance subscription and BK’s contribution is a boost to improve their status.

The city of Kigali has over 1.2million dwellers in the districts of Gasabo, Nyarugenge and Kicukiro of which most of them are working class with other insurance policies.

The last Umuganda of 2019 event also saw BK staff join the Vice Speaker of Parliament, Edda Mukabagwiza to prepare terraces on the Rusororo slopes as a way of preventing soil erosion and possible landslides.

In today’s Umuganda across the country, Rwandans dedicated the excercise to dig trenches and terraces as a way of fighting further disasters.

In Rusororo, BK staff and district officials picked hoes and spades to shape one hectare out of the ten hectares that are planned for planting of 4,000 fruit trees next year.

The Sector Agronomist, Jean Marie Vianney Uwihoreye, said that the terraces will help in controlling soil erosion and rain water damaging the main Kabuga highway, but also improve the beauty of the terrain and horticulture farming.

“We have already made plans to plant mangoes and orange fruit trees, of which citizens will be able to consume to improve their diets but also have a green beautiful environment in the community,” Uwihoreye said.

MP Edda Mukabagwiza used the opportunity to address some problems which include family affairs where husbands where not playing their  – blaming men who do not play their responsibilities such as paying health insurance, among others.

Mukabagwiza asked the community to work together to resolve issues that can create insecurity starting from the family level, especially by preventing teenage pregnancies, abuse of children and women’s rights.

“We all have the responsibility of building and instilling the values of love, peace, patriotism in order to have a better generation of Rwandans,” Mukabagwiza said.