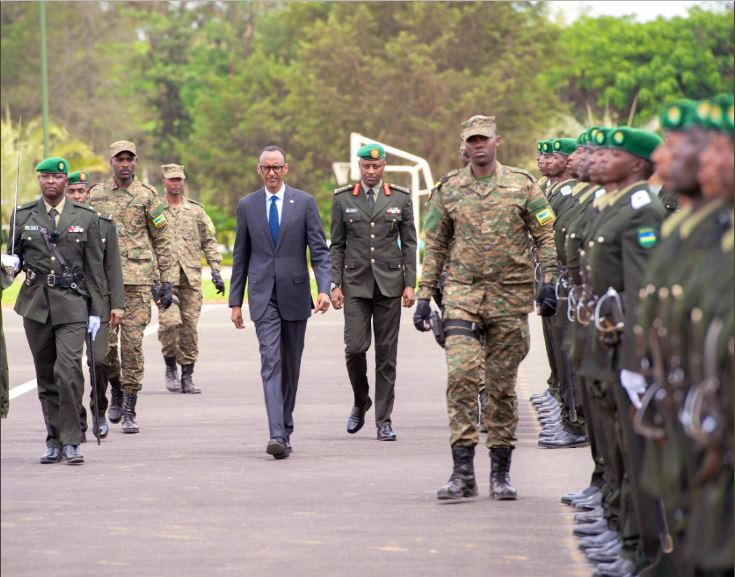 Rwanda’s President Paul Kagame and Commander-in-Chief of the Armed Forces has paid tribute to officers, men and women of security organs for selfless efforts and professionalism exhibited in safeguarding the country against external threats throughout the year 2019 which ends on December 31.

The President, in a New Year message delivered to armed forces and was released by Rwanda Defence Forces (RDF), said that, just like the previous years, “2019 had its share of Defence and Security threats against the people and territory of Rwanda. The remarkable efforts deployed, individually and collectively; to find relevant, timely and efficient solutions to those challenges are never lost on anyone’s mind.”

Indeed, Rwanda had several infiltration by armed groups especially in the North, South and Western parts of the country.

A recent case was in October this year when elements of the Democratic Forces for the Liberation of Rwanda (FDLR) crossed over from Democratic Republic of Congo (DRC) and killed atleast 14 people and 18 injured.

The attackers were linked to neighbouring countries – mostly Uganda and Burundi which Rwanda has accused of supporting them.

In the same month, Rwanda National Police presented to the public and the media four men who were arrested in connection with grenade attacks in Rusizi district.

The suspects had on Saturday 19 Oct 2019, at about 7.30pm, threw a grenade in Kamembe town- Rusizi District – injuring four people.

In December 2018, unidentified assailants had set fire on three passenger vehicles, killing two civilians and injuring eight in Southern part of the country.

The attack happened at 18:15 hours in Cyitabi Sector of Nyamagabe District – inside the thick Nyungwe forest.

Several suspects have since been arrested and faced justice.

In his New Year message of appreciation, the President told armed forces that: “The nation of Rwanda appreciates the invaluable sacrifice you continue to provide as you strive to advance the causes of peace and safety at home and abroad.”

Below is President Kagame’s message to armed forces

Men and women of the Rwanda Defence and Security Forces;

1. The year 2019 comes to an end, and we are about to celebrate as we usher in the New Year 2020. I wish to take this opportunity to extend, on behalf of the Government of Rwanda, my family and my own behalf; my best wishes to you and your families.

2. Indeed, I wish to express my gratitude to you, officers and men, who continue to work tirelessly with dedication and determination to defend the freedom, and stability of our people and country.

3. The nation of Rwanda appreciates the invaluable sacrifice you continue to provide as you strive to advance the causes of peace and safety at home and abroad.
The distinguished service each of you provide to our Nation as you discharge your duties is not taken for granted, it is highly valued… We also acknowledge the distress you and your loved ones may be experiencing at this time of year, for those deployed away from home and families.

4. Like previous years, 2019 had its share of Defence and Security threats against the people and territory of Rwanda. The remarkable efforts deployed, individually and collectively; to find relevant, timely and efficient solutions to those challenges are never lost on anyone’s mind.

5. I am proud to convey the sincere gratitude of the people of Rwanda, whose thoughts and prayers are with you as you build on past achievements; always aiming for the highest standards of professionalism and patriotism in performing your duties.

6. At this juncture, I wish to pay tribute to our departed comrades who lost their lives while serving our nation and the world in 2019. To the families who lost their loved ones, I send my heartfelt condolences.
Be assured that the people of Rwanda acknowledge your losses, as an ultimate gift to your Nation, for it to always emerge safer and stronger and better.

7. Let me end this message by urging you all to maintain and improve the professional standards and patriotic values you demonstrated in 2019. I wish you all and your families a Happy and Prosperous New Year 2020.

In 2019 Rwanda Added the Best to Its List of Friends