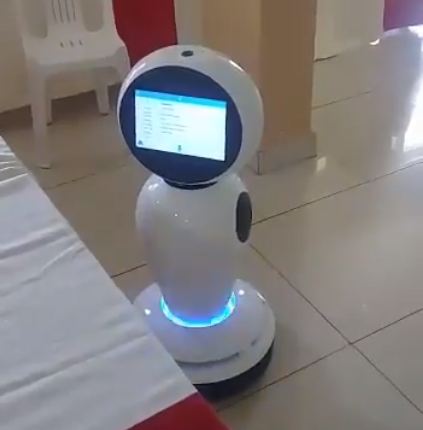 Rwanda will start using robots in the fight against New Coronavirus where the programmable machines will be used to do some of the tasks in the handling of COVID-19 cases in a bid to minimise human-to-human contact.

This was revealed by the Ministry of Health on Friday, with the Director of Rwanda Biomedical Centre (RBC), Dr Sabin Nsanzimana confirming the development.

“We are introducing the use of robots in the management of our #COVID19 Treatment Centres to reduce transmission risks. Robots will screen temperature, monitor status, keep medical records of Patients,” Dr. Nsanzimana revealed on Friday, sharing a video of one of the robots.

In the video, the robot filmed in the treatment centre, is ordered to go to its charging point and it obliges in the demo footage, responding to human orders.

According to Dr. Nsanzimana, the robots will be used to handle some tasks including approaching patients and taking their temperature and then reporting back with the results.

Speaking on the Rwanda Television on Friday, the Minister of Health Dr Daniel Ngamije revealed that five robots have been named Urumuri, Icyizere, Kazuba, Ngabo and Mwiza and they will be helping in the handling of COVID-19 tests.

“These robots will support us in different ways but most importantly they will be approaching patients to test temperature and status of breathing among other tasks, which will help us minimise human-to-human contact,” Dr Ngamije said, adding that more robots will be arriving in the country soon.

“They will help us reduce the number of times the doctor or nurse gets in contact with the patient and also help our medical personnel to handle many cases at the same time and also have time to rest as the robots assist,” the Minister of Health said.

Dr Ngamije said the robots will be deployed in places where many people convene such as bus terminals, to do random tests and identify people who could have signs of COVID-19.

Countries around the world have been using robots to fight New Coronavirus where the machines are used to assist humans to contain the spread of the virus. Several countries including China, Japan, US, and UK have been deploying robots to handle risky tasks.

“Robots have the potential to be deployed for disinfection, delivering medications and food, measuring vital signs, and assisting border controls. As epidemics escalate, the potential roles of robotics are becoming increasingly clear.”

“For disease prevention, robot-controlled non-contact ultraviolet (UV) surface disinfection is being used because COVID-19 spreads not only from person to person via close contact respiratory droplet transfer but also via contaminated surfaces,” a study published in the Science Robotics says.

China is using robots to disinfect people and places, which has helped to contain the spread of the virus which was first detected in Wuhan, Hubei Province of the Asian country.

We are introducing the use of robots in the management of our #COVID19 Treatment Centers to reduce transmission risks. Robots will screen temperature, monitor status, keep medical records of Patients. @RwandaICT @RISARwanda @RURA_RWANDA pic.twitter.com/2BXmUaT4HI