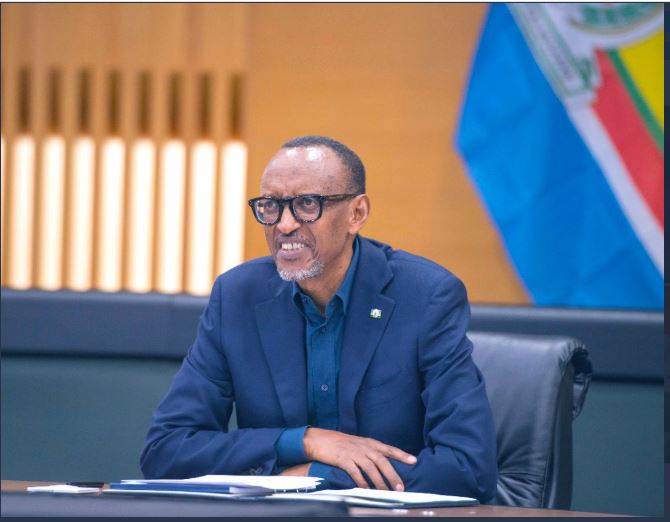 President Paul Kagame during the virtual EAC meeting May 12,2020

President Paul Kagame has called on East African Community (EAC) member states to work together in the fight against the New Coronavirus outbreak, as the countries look to undo the impact of the virus on regional economies.

The Head of State made the call on Tuesday while chairing a virtual EAC Consultative Meeting with Heads of State of Uganda, Kenya and South Sudan on the regional response to COVID-19.

In his remarks, President Kagame said that this is undoubtedly a difficult period for the region, and the entire world, pointing out that there are different efforts being worked on to minimise the economic hardship on the citizens, while protecting their health.

“To combat this pandemic, it is critically important to maintain the flow of trade within our region, working hand in hand with our private sector,”

“That is the key principle I wish to emphasise today. So long as any member of our community is vulnerable, we are all at risk. Therefore, we must work very closely together in the months ahead, to face this challenge as a community of partners,” he said emphasising the need for harmonised efforts.

He said that putting in place focal persons from each member state to regularly meet, analyse, coordinate with the Secretariat, and also inform the leaders of partner countries for quick and necessary decisions to be made is very important.

“Not having the focal points undermines the whole essence of what we are trying to achieve,” he said, adding that in order for the bloc to effectively get the results it wants, in circumstances like these, some of the rules and regulations that bind us, which the region must adhere to, may not apply.

President Kagame last month revealed that there had been several attempts to have a Heads of State Summit on COVID-19 but it was not possible as some of the leaders couldn’t make it on the agreed date while those who were available could not proceed due to EAC procedures and quorum requirements.

“While the procedural matters of realising the quorum for the East African leaders to meet, discuss and make decisions is important, if that can’t be achieved, there are ways like this where consultations can be made,”

“Consultations may also result in important decisions, for example, today we agreed on some of the suggestions that have come up, on how to deal with the problem of transport, truck drivers and the transmission of COVID-19,” President Kagame said.

He said that going forward, the bloc might need to review some of the procedural requirements during the forthcoming Summit to ensure that quorum issues don’t stand in the way for important regional initiatives such as efforts to fight pandemics.

“We might have to examine this particular point so that we are not tying our own hands in doing the very important things we have to do, just because of what we ourselves put in the books that guide us. So there have to be flexible ways, especially for situations like these,” he said.

President Kagame also addressed the absence of President Magufuli and President Nkurunziza, saying that the Heads of State missed for their own reasons while the EAC Secretary General Liberat Mfumukeko could also not be present, adding however that it shouldn’t stop others from moving forward.

“We are meeting without some key players: the partner states of Tanzania and Burundi were not able to participate because of their own reasons. The Secretary General of the East African Community could not avail himself,”

“But my point is, we need to work for our people. If we can’t all work together, the six of us, and have things moving, it doesn’t mean that two, three, four shouldn’t work, in these circumstances, to deal with the problems that we have to deal with,” he said.

He however said that going forward, the bloc may also find a solution for the underlying problems that caused ‘this situation to happen’.

The Heads of State also discussed the issue of cross-border truck drivers and their assistants who are responsible for cross-border transmission of New Coronavirus cases in several East African countries.

“We also have a similar problem of truck drivers. These are, in actual fact, the new cases we have been registering in the recent past, to reach that 285, total (Now 286). So, we are very much interested in working with the region to see how to effectively manage the problem,” he said.

He said the outcomes of the ministerial meetings of March 25th and May 8th are clear and practical and implementation of the measures by the EAC will benefit the entire region.

He commended the Regional Task Force on COVID-19 on completing the EAC regional response plan, which he said Rwanda looks forward to put into action.

“We also appreciate the Secretariat’s work in arranging for the mobile testing facilities, which we look forward to seeing fully operational. It has been some time since they arrived and were allocated, but have so far not been operational,” he said, thanking leaders for making time to attend.