Back Home: Fallen RDF Peacekeeper to Be Laid to Rest Friday 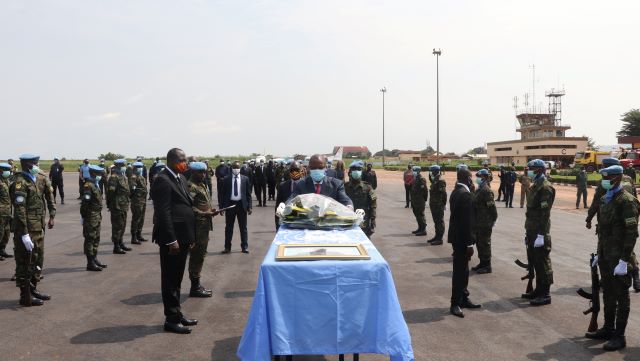 A Rwandan Peacekeeper recently killed in an attack in Central African Republic (CAR) will be laid to rest tomorrow, Friday, at the army cemetery in Kanombe, Rwanda Defence Force (RDF) has said.

The casket bearing the remains of Rwandan peacekeeper, Sergeant Major Edouard Nsabiyaremye, arrived in Rwanda from the restless Central African nation on 21 July 2020.

SM Nsabiyaremye, who was serving under the United Nations Multidimensional Integrated Stabilization Mission in the Central African Republic (MINUSCA), was killed in northwest CAR on 13 July 2020 during an attack by elements of an armed group.

The President of the Central African Republic Faustin-Archange Touadéra, , accompanied by senior officials of MINUSCA, paid homage to the deceased peacekeeper in a ceremony at M’Poko International Airport in Bangui before his body was airlifted to Rwanda.

“The RDF reiterates its heartfelt condolences to the family and friends of the fallen soldier,” RDF said in a statement, adding that “SM Nsabiyaremye will be laid to rest at Kanombe Military Cemetery on Friday, 24 July 2020,”.

Last week, RDF issued a statement mourning the death of Rwandan peacekeeper who was killed in an ambush on Monday last week.

RDF said it was deeply saddened by the death of a Rwandan peacekeeper, following an attack on 13 July 2020 by elements of an armed group,”

“The RDF expresses its heartfelt condolences to the family and friends of the fallen peacekeeper,” RDF said in a brief statement, adding that RDF peacekeepers remain committed to the protection of civilians within the mandate of MINUSCA, and the other peacekeeping missions under which Rwandan troops serve. 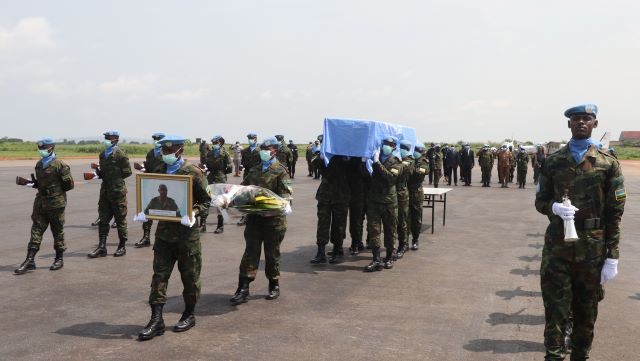 The killing of the Rwandan blue helmet was condemned by the United Nations Secretary General António Guterres last week.

Guterres strongly condemned the attack carried out by the Return, Reclamation and Rehabilitation (3R) armed elements who targeted a MINUSCA convoy in Gedze, Nana-Mambere prefecture in the northwest of the country.

The attack saw two of the Nsabiyaremye’s colleagues wounded.

“The Secretary-General expresses his deepest condolences to the family of the victim as well as to the people and Government of Rwanda. He wishes a speedy recovery to the injured,” a statement from Guterres’ office said.

The Secretary-General recalled that attacks against United Nations peacekeepers may constitute war crimes under international law.

He called on the Central African Republic authorities to spare no effort in identifying the perpetrators of this attack so that they can be brought to justice swiftly.

Guterres reaffirmed that the United Nations will continue to support national efforts to advance peace and stability in the Central African Republic, working closely with the country’s international partners. Following the killing of the Rwandan blue helmet, RDF Peacekeepers continue to engage militia groups. MINUSCA in a tweet revealed that on Wednesday night through Thursday morning it engaged and repulsed attacks in Gedze, in the Nana-Mambéré prefecture, North West of the country.

The RDF contingent neutralized three elements of the Return, Reclamation and Rehabilitation (3R) militia group. The Peacekeepers recovered ammunition and weapons, including an AK 47 and five RPG rockets.