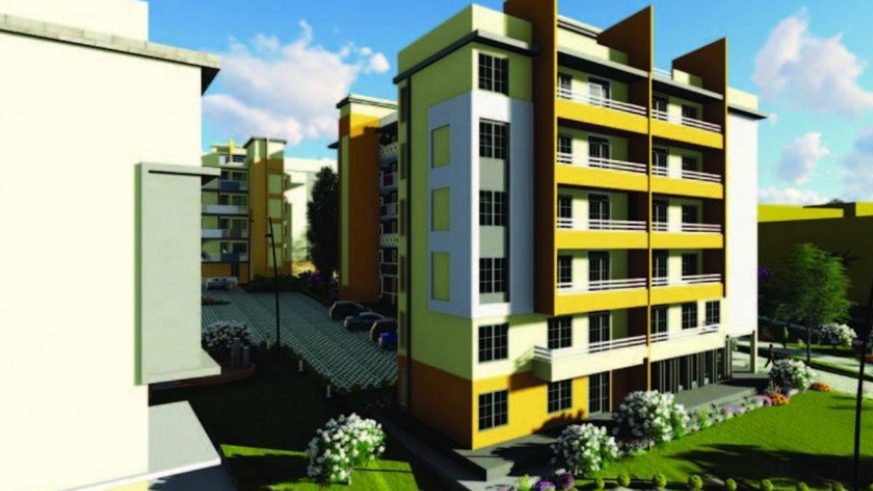 An artistic impression of the planned housing units.

Shelter Afrique yesterday approved the development of an approximately US$400 million housing project in Kigali, in partnership with Rwanda Social Security Board (RSSB) and the Development Bank of Rwanda (BRD).

The Kinyinya Park Estate Project- composed of 10,000 integrated and sustainable large-scale houses is expected to be completed within four years and will benefit 50 000 Rwandese and create over 40 000 jobs during construction.

Other partners in the project include, Development Funding Institution (DFI), Eastern and Southern African Trade & Development Bank (TDB and Ultimate Developers Limited (UDL) and and an internationally acclaimed large-scale contractor as Engineering, Procurement and Construction (EPC).

The estimated $400 million project is part of TDB approved facility worth US$150 million to Shelter Afrique to support the first 2 phases of the project.

Besides the affordable apartments, 200 units of commercial outlets including schools, shops, and business facilities are expected to be constructed on behalf of RSSB.

Shelter Afrique Board Chairman Dr. Steve Mainda said the Company is committed to its 2019-2023 strategic goals, which focus on achieving both development impact on all large-scale housing projects so as to achieve the creation of value for shareholder.

“As a board we are committed to ensuring that the Company achieves its mandate of providing affordable housing across Africa by embracing viable public-private partnerships such as the Kinyinya Park Estate housing project,” Dr. Mainda said.

For RSSB, the project is expected to enhance its new 2020 strategic plan of increasing access to affordable housing in Rwanda and directing pensioner’s investments in projects that are profit oriented, after Parliament in September advised the board to scrutinize projects which have direct impact on their lives of its contributors.

While appearing before the parliament Public Accounts Committee (PAC), RSSB Director General, Regis Rugemanshuro said there were previous mistakes in project planning but promised with the new management all projects will be citizen (pensioner)-centered in their new strategic plan aimed at change and creating autonomous investment decisions based on expertise and research despite risks on the market.

China, Rwanda jointly fight against COVID-19 for a Community with Shared Future

Technology Will Help Us Navigate COVID-19 Recovery & Beyond -President Kagame