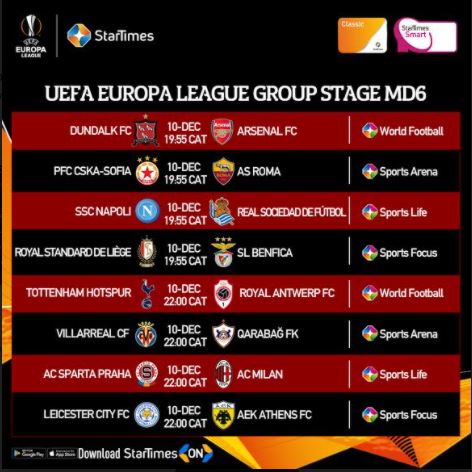 Having done the hard work in the preceding matches, the three Premier League clubs can go into their final Europa League matches on Thursday without pressure.

Leicester City, Arsenal and Tottenham Hotspur are already guaranteed a place in the knock-out stage of the competition, with the Gunners having already secured top spot in Group B.

Leicester and Spurs, meanwhile, could follow suit with a win in their final matches.

Arsenal, who were beaten 2-0 by Spurs in their league match on Sunday, are the only club in the competition with five wins out of five and will be keen to maintain that record in Dublin against Dundalk.

The Irish club have lost all their five group games and as much as Arsenal will want to ensure that their run continues, Dundalk will be looking to end theirs.

For Arsenal coach Mikal Arteta a good Europa League run could be essential as he has come under increasing pressure as results in the Premier League have not gone according to the clubs’ faithful fans wishes.

“He played a good game in that position. It suits him. He’s really good at linking play, he worked hard and scored a beautiful goal.”

In Group G Leicester City are at home against AEK Athens.

Like Braga, The Foxes are on 10 points, but are ahead of the Portuguese team on the head-to-head results and a victory against AEK will guarantee them first place, irrespective how Braga play in Ukraine against Zorya Luhansk.

Spurs coach Jose Mourinho, who has twice won the competition – with Porto and Manchester United – goes into their final game at home against Antwerp needing his team to beat the Belgian club to overtake them at the top of Group J.

Spurs’ victory against Arsenal helped the Londoners maintain their top spot in the Premier League club and Mourinho could well be facing some difficult choices soon whether he can afford to continue pursuing all competitions, but with his record in the Europa League, is seems likely that the competition ranks high on his list of priorities.

African football fans will be able to watch the best games of this week’s Europa League action live and exclusive on the StarTimes football channels.

Africa’s leading digital-TV operator has secured the broadcasting rights for the prestigious competition and will be showing the games live and exclusively throughout the continent.