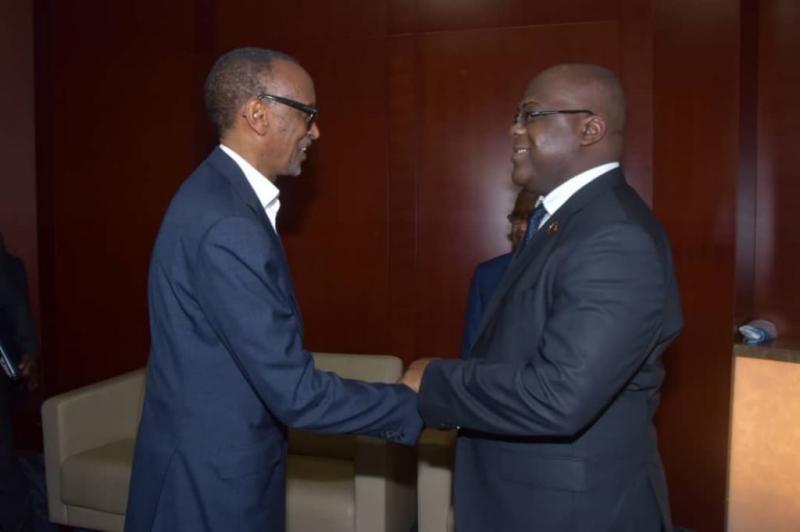 Relations between Rwanda and DRC have been cordial since President Tshisekedi (Right) took office in January 2019.

The Rwandan Government has dismissed a report by a United Group of Experts alleging that Rwandan troops were conducting incursions in the Democratic Republic of Congo (DRC).

A statement released on Friday, January 8, rubbished the findings of the report released last month which claimed that there was sufficient evidence that Rwandan and Burundian forces were operating in Eastern DRC.

“The Government of Rwanda refutes allegations from the UN Group of Experts (GoE) Midterm report dated 23rd December 2020, and reiterates that there were no Rwandan troops on the territory of the Democratic Republic of Congo and that there had been no recent Rwanda Defence Forces (RDF) joint operations with the Armed Forces of the Democratic Republic of the Congo (FARDC),”

“Rwanda enjoys cordial bilateral relations with the DRC, and there are several existing bilateral cooperation engagements, including military cooperation. However, such cooperation is exclusively limited to intelligence sharing on various armed groups operating in Eastern DRC that are a common threat to both countries,” the statement reads.

Relations between Kinshasa and Kigali have been cordial since President Félix Antoine Tshisekedi took office in January 2019, with the two countries working together to restore peace not only in Eastern DRC but also in the Great Lakes Region through diplomatic cooperation.

“The Government of Rwanda would also like to reiterate its commitment to promote national and regional natural resources governance mechanisms in the fight against illegal exploitation and trade of minerals in the region,”

“It is against this background, and in a spirit of cooperation and goodwill, that in February 2020, during the last visit of the UN GoE to Rwanda, they were shown various anti-smuggling efforts in place, and witnessed minerals that had been seized by authorities,” the statement says further.

Rwanda accused the UN Group of Experts of lack of good faith, despite the cooperation Kigali has accorded them.

“The Government of Rwanda regrets the shortcomings of the UN GoE report, and the lack of good faith demonstrated by the experts. Despite being granted access to various Government institutions, facilitated in meeting witnesses and provided with responses to all issues raised, the UN GoE report omitted key information and clarifications provided by the GoR,” Rwanda said.

It is not the first time Rwanda has questioned the motive of UN GoE. Between 2012 and 2013, during the M23 uprising, Rwanda accused the UN GoE led by Steven Hege of running a smear campaign to tarnish the image of Rwanda with unfounded allegations.

The Government of Rwanda expressed its deepest concerns towards what it called the lack of rigor from the UN GoE in the fulfilment of its mandate, raising serious concerns about the independence of its reports.