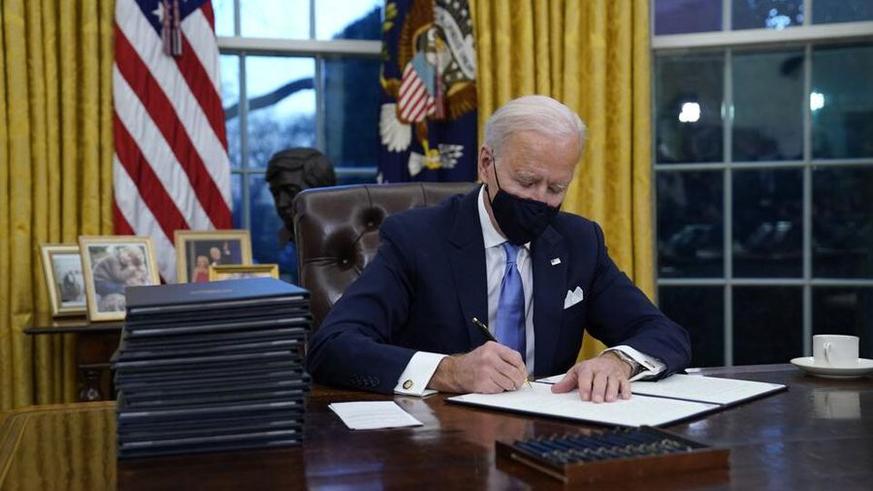 President Biden has undone most of the deals and protocols the former President Donald Tump had removed the U.S.

The U.S Government has announced plans to ratify Kigali Amendment on phasing down super-polluting hydrofluorocarbons (HFCs) under the Montreal Protocol, a deal that the former US president Donald Trump trashed in 2017.

The Kigali Amendment is a 2016 global pact signed under the Montreal Protocol to phase down climate-warming HFCs over the coming decades of which the U.S. government signed in 2016 but had not yet ratified.

The 2016 Kigali Amendment to the Montreal Protocol which entered into force in 2019 is an international treaty-designed to phase out such powerful climate-warming gases by more than 80 per cent in the next 30 years.

Though the U.S. was a top proponent of a global HFC phase down in the years leading up to the Kigali Amendment, even when in November 2020, the US became the first nation in the world to formally withdraw from the Paris climate agreement- a global binding deal to reduce gas emission.

By executive order, and living to one of the promises in his campaign trial, newly elected US President Joe Biden directed his administration to prepare to send the Kigali Amendment that was signed in Kigali in 2016 with aim at phasing down climate-warming in the next decades.

According to the order, the proposal will be sent to the Senate to give its advice and consent before the U.S. government moves to ratification of the deal.

The order formally directs the State Department to prepare a ‘transmittal package’ to the U.S. Senate for the Kigali Amendment, the first step of the U.S. ratification process, within 60 days.

Biden’s move is another of its kind, following the recent announcement on supporting the World Health Organisation to distribute Covid-19 vaccines to least developed countries which is currently changing the relationship of the U.S government with other countries on the global stage.

Once the U.S State Department submits the transmittal package, it will fall to the U.S. Senate to determine whether to move forward with Kigali ratification, however looking at the 2018 Senatorial bi-partisan reception expressing support for ratifying the Kigali amendment and benefits for the United States, the Senate could easily pass the order.

The U.S has moved to take the lead on the implementation of the Kigali Amendment and Paris Pact.

If successfully backed by the US government, the world’s second largest emitter of greenhouse gases, the Kigali implementation worldwide can avoid HFC use equivalent to as much as 70 billion tons of carbon dioxide between now and 2050 and can prevent up to one half a degree Celsius of climate warming over this century.

More than 120 nations have already ratified the Kigali Amendment.

However, with the Biden administration’s move showing how serious it is about achieving the massive climate benefits the Kigali Amendment can deliver, which may also push other big time HFC global emitters like China, India, to come on board to amend the Kigali deal.

The US Natural Resources Defense Council says it plans to work with its partners to follow each step of the way to make sure its Environmental Protection Agency (EPA) and other agencies move as quickly and ambitiously as they can to reduce U.S. HFC by 85% over 15 years, as Kigali requires, or more.

Rwanda has also adopted a national cooling strategy, which is one of the results of the Kigali Amendment to the Montreal Protocol to help phase out the gases.

To reduce its own gas emissions, Rwanda has moved to introduce electric mobility services (Taxi Motos and Vehicles) , emphasis on planting more trees exceeding the 30% forest cover target (30.4%) by 2020.

Rwanda also adopted a new Global Standard for Nature-based solutions (NbS) with a 10-year tree planting campaign that will change Rwanda’s narrative of planting trees to focus on monitoring tree growth and impact on ecosystem and biodiversity.