The UN Group of Experts: Giving Succour To Enemies of Peace? 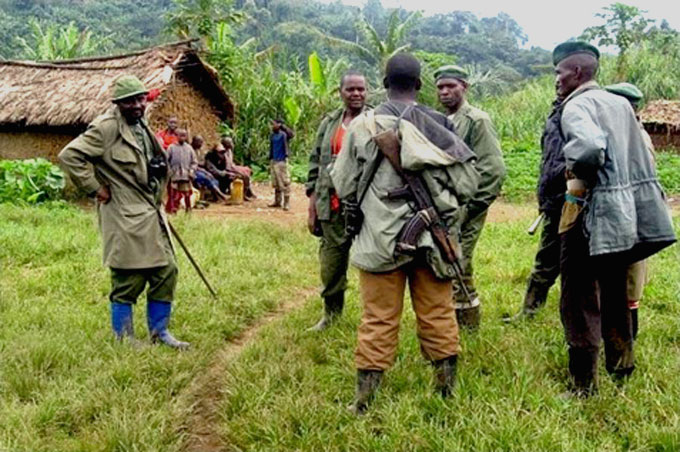 FDLR Combatants at one of their Bases in Congo. Rwanda and DRC have worked closely to end insecurity where the UN has failed for decades.

Two heads of state, in a region that has known all too little peace, begin to navigate their way through an antagonistic past, to a state of amity, that once existed between their two peoples, in a long ago forgotten past. They might have expected support from the UN, they got hindrance.

In their midterm report on the security situation in the Democratic Republic of Congo (DRC), a United Nations Group of Experts (UN GoE), asserts that “members of the Rwanda Defence Force were present and conducted operations in North Kivu from late 2019 to early October 2020 in violation of the sanctions regime.”

The GoE seems to have based their conclusions about Rwanda’s presence in DRC, primarily on the ongoing operations by the Congolese Defence Force (FARDC) against armed groups on its territory, some of which, like the self-styled Democratic Forces for the Liberation of Rwanda (FDLR), target Rwanda.

The experts appear to reason that the number of leaders of anti-Rwanda groups, such as the FDLR, who have been either captured or killed, must point to the presence of Rwanda military in the DRC.

The FDLR was formed by the defeated genocidal forces responsible for the 1994 Rwanda genocide against the Tutsi. They are made up of members of the former Rwandan army, the Interahamwe militia, and others recruited over the years.

Agreements between Rwanda and the new DRC government of Felix Tshesekidi, especially on security, have led to the capture, or killing of several members of the FDLR and their affiliates, including Sylvester Mudacumura and Juvenal Musabimana, who were in the leadership of the group or its factions.

In a strongly worded written statement, the Rwandan government dismissed the claim of their military’s presence in the DRC, and questioned both the intentions, and capability of the make up of the GoE, to accurately reflect the reality in the region.

“Rwanda enjoys cordial bilateral relations with the DRC, and there are several existing bilateral cooperation engagements, including military cooperation. However, such cooperation is exclusively limited to intelligence sharing on various armed groups operating in the DRC that are a common threat to both countries.”

The statement concludes, “the Government of Rwanda wishes to conclude by expressing its deepest concerns towards the lack of rigour from the UN GoE in the fulfilment of its mandate, raising serious concerns about the independence of its reports.”

The tone of the statement may also be reflective of the fact that from Rwanda’s perspective, it is not the first time that a UN GoE has misrepresented the country.

It was an earlier UN Group of Experts in 2013 which produced a report accusing Rwanda of responsibility for the M23 rebel group. Then as now, the GoE relied on unsubstantiated assertions.

The Group was led by Steven Hege, whose anti Rwanda stance could be found in several publications online, until they were hastily removed, following complaints about his perceived bias.

A self-declared champion of the FDLR, Hege had declared of the much-persecuted Congolese of Rwandan origin, “it is not enough that they just say they are Congolese. They must demonstrate that they are just that by prioritising their relationships with their fellow Congolese citizens, over the economic and territorial interests of Rwanda.”

At the time of writing this, this community was being subjected to attacks, which included murders of men, women and children, simply because of their ancient connection to Rwanda.

It is presumably because he was anointed with the imprimatur of the UN, that Hege believed himself empowered to be the arbiter of what hoops through which a people in Africa had to jump, to be fully accepted as citizens of a country they and their ancestors had called home for Centuries.

The UN has had a presence in the DRC for more than twenty years now, costing over a billion dollars a year. The organisation might be expected to welcome any regional cooperation that brings about the peace the UN itself has manifestly failed to achieve.

Instead, what this latest GoE does, is embolden vested interests in the DRC, including some in the country’s Catholic Church establishment, who would rather not see peace and good neighbourliness, between Rwanda and the DRC.

As the Rwanda Foreign Minister, Vincent Biruta observed in a recent media interview, “our rapprochement with the DRC won’t please everyone.” He would however have expected it to please the UN at least.

Ironically, the Rwanda DRC security agreements are achieving what the UN forces in the DRC are supposed to have accomplished almost a decade ago now. The UN undertook to militarily move against all armed groups in the DRC, an undertaking they clearly had no intention of honouring.

The question has to be asked, why, when both countries are embarked on a difficult undertaking of finding a resolution to issues that have seemed intractable for more than two decades, does the UN, of all things, choose this moment, to make claims that may damage efforts for peace.

And there should be no doubt that these are mere claims. The GoE offers no incontrovertible proof, for a claim that is denied by both countries.

There is perhaps a hint to the answer, in the Rwanda statement, questioning the independence and good faith of the GoE reports.

For the integrity of the system of the GoE, it is surely high time that the Security Council established a more transparent process, for the selection of individual experts within the GoE. Otherwise, as the Rwandan statement implies, the reports themselves will not be worth the paper on which they are written.

Rwanda Lose To Congo In Final Warm-up Game For CHAN

Masterplans for Satellite, Secondary Cities to Be Ready by June