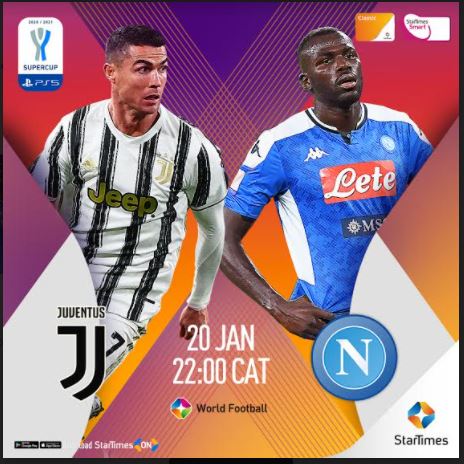 The two teams involved in Wednesday’s 2020 Supercoppa Italiana final – Juventus and Napoli – go into the game in Reggio Emilia with very differing form. Cristiano Ronaldo’s team needs a victory to rebound in Serie A.

It will be the 33rd time that the competition, that sees the Serie A champions take on the Coppa Italia winners in a once-off game for the Supercoppa title, is held.

Juventus, who are chasing an unprecedented 10th consecutive Italian A league title, find themselves in the unusual position of being fifth in the table – seven points behind the leading Milan clubs AC and Inter.

Andrea Pirlo’s side slumped to a 2-0 defeat at title-chasing Inter Milan on Sunday, while Napoli trounced Fiorentina 6-0 on the same day.

Juventus have won the Supercoppa a record eight times, and been the losing finalist seven times.

Meanwhile, all three of Napoli’s previous finals have been against Juventus, the last one in 2014, when Napoli won 6-5 on penalties. Pirlo played for Juventus in that game, while current Napoli players Belgian striker Dries Mertens and French defender Kalidou Koulibaly, were on the winning side.

Napoli president Aurelio De Laurentiis had applied for a postponement of the game to a later time when spectators would again be allowed, saying that the revenue from the fans could be donated to Covid research, but his request was turned down.

The club issued a statement at the end of last week, that their request had only been a proposal and they accepted the decision of the Italian Football League. “We are looking forward to playing the game,” the club said.

Napoli coach Gennaro Gattuso, who took over Gli Azzurri in December 2019, paid a tribute to Juventus after his side’s victory against against Fiorentina.

“They have dominated football in Italy for nine years, they are strong and even if some of their players are not available, they have others who make the difference.”

Against Fiorentina the coach was without Nigerian Victor Osimhen, who was in quarantine after being infected with Covid, as well Fabian Ruiz, who also sat out with an illness.

“We will be the underdogs, but hope that some of our players who have missed games will be back for us. We hope to play a good game. We certainly have a chance, but there is a great respect we have for their [Juventus] history and their mentality,” Gattuso said.