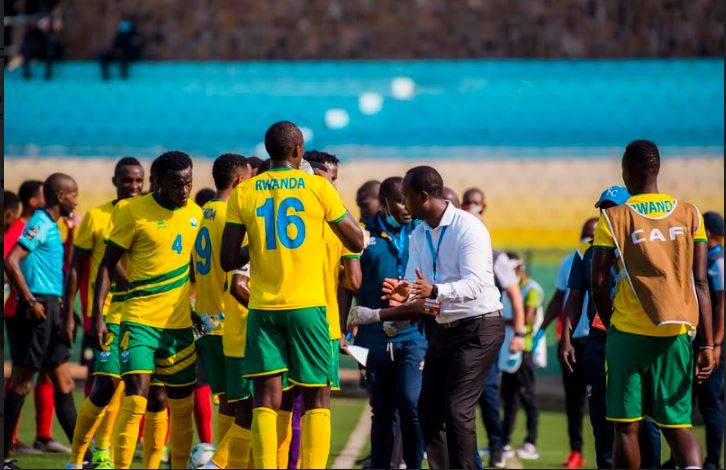 National football team head coach has challenged his players to create history when they face Cameroon in their final Africa Cup of Nations qualifier Tuesday.

A goal from Lague Byiringiro in Amavubi’s 1-0 home win against Mozambique last week, reignited their hopes of qualifying for the 2021 Africa Cup of Nations.

But two days later, Rwanda’s hopes were left hanging in balance by Cape Verde’s win against Cameroon, a result that took Amavubi’s destiny out of their hands.

They now need to beat Cameroon while hoping the other results to go their way.

Nevertheless, Mashami has called on his players to grab the chance to end Rwanda’s 17-year exile from the tournament.

“My message to the players is that we all still have the chance to qualify, we have 90 minutes to try to get the qualification and that’s why we are here and the players know it.” Mashami said

“They know where we have come from and where we want to be.

“This is the time to make memories in their career and make history for their country, I am sure all the players want it and they know they can do it.” he said

Mashami’s side will qualify if they beat Cameroon and Cape Verde loses. Cameroon won the reverse fixture 1-0.

With Cameroon automatically qualified as hosts, Rwanda, Cape Verde and Mozambique are battling it out for runners-up spot.

If Cape Verde beat Mozambique, they will qualify. A draw could also be enough for Cape Verde in the event that Rwanda fail to beat Cameroon.

If Rwanda wins and Cape Verde draws, both will be level on points with eight each and goals scored will come into play to decide who qualifies. Cape Verde currently has a better goal difference (+2) than Rwanda (-1).

Mozambique can also qualify if they beat Cape Verde and Rwanda loses to Cameroon.