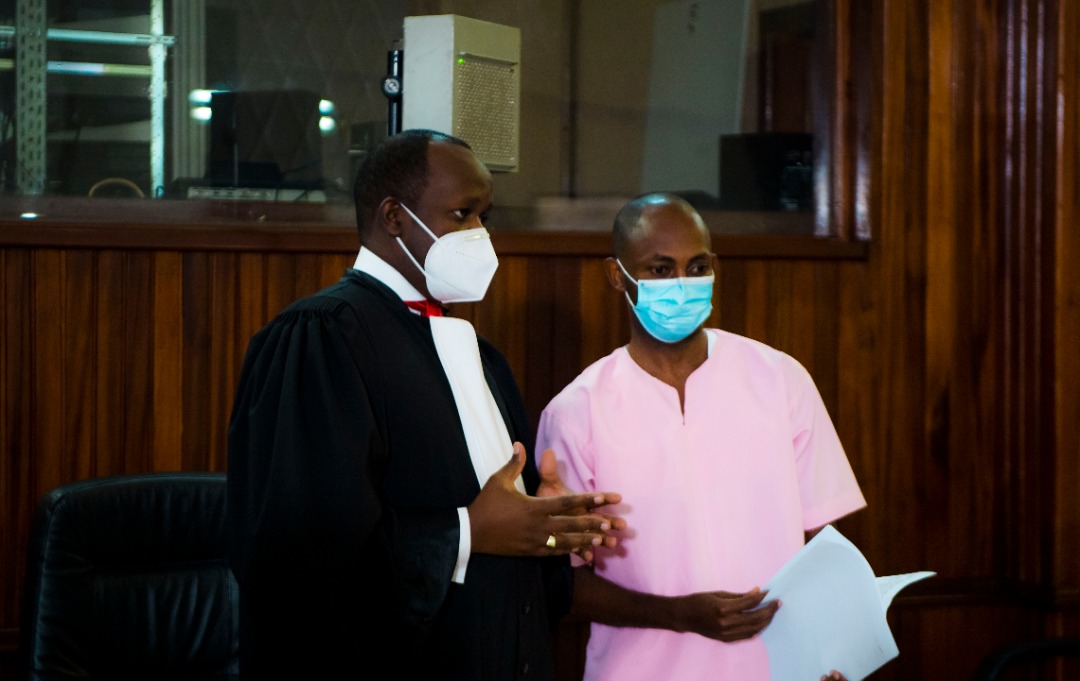 Nsabimana Callixte, co-accused in a terror trial also involving Paul Rusesabagina and 19 other terror suspects who are alleged to have c0mmitted crimes on Rwandan soil including killing civilians has made several revelations on source of funding of their terror activities.

Nsabimana was spokesperson of a coalition of MRCD organization and its armed group FLN which is alleged to have conducted killings in Nyaruguru and Nyamagabe districts of southern province and Nyamasheke district of Western province of Rwanda.

This afternoon, Nsabimana was given the floor to proceed with his defence becoming the first to speak as the joint trial enters into substance phase.

Ndabimana pleads guilty of 19 offences but explains the circumstances and roles he played in every crime.

He elaborated on the connections of MRCD-FLN with military and intelligence officials from Uganda and Burundi and contacts that they held in efforts to destabilise Rwanda.

He also named the alleged key sponsors of terrorism activities.

Among others, he said that Rusesabagina who was the leader of the coalition had assured support from his friends.

“I was not among the key people in decision making, but I happened to know that Paul Rusesabagina was a person that was expected to give a lot. One day, senior officers in the coalition asked me to put him(Rusesabagina) under pressure to bring the money he had pledged,” said Nsabimana before the court.

Nsabimana said that Rusesabagina was said to have pledged $ 1 million, and when he engaged him, happened to know that the money was collected from sponsors including allegedly Zambian President Edgar Lungu.

“When I asked him(Rusesabagina) he answered me in french words: ”c’est un ami a moi” translated as ‘ He is a friend of mine,” Nsabimana said.

Of one million pledge from Rusesabagina however, he said some $150,000 was given.

The Zambian support, according to Nsabimana, was reaching them through one Nsengiyumva, a trader from Zambia.

“I happened to learn that Lungu had pledged to sponsor a lot after Rwanda’s end of chairmanship of the African Union,” Nsabimana said.

The court pushed Nsabimana to show evidence that what he was saying was true, and he said Rusesabagina who is in the same trial may come forward and prove him wrong.

“Moreover, I have never been to Zambia, I did not meet any challenge in the country. Why would I just choose one African president to mention him for no reason in my trial?” Nsabimana said adding “Rusesabagina himself, other colleagues in MRCD-FLN used to call him Godfather.”

According to Nsabimana Rusesabagina had several sources of funding, but he allegedly told him once: “where I get founds is none’s business.”

Nsabimana mentioned the source of funding of up to $250,000. Others, he said, came from Belgium and Australia sponsors.

He also said there was a list of 100 traders who were giving contributions in top secret.