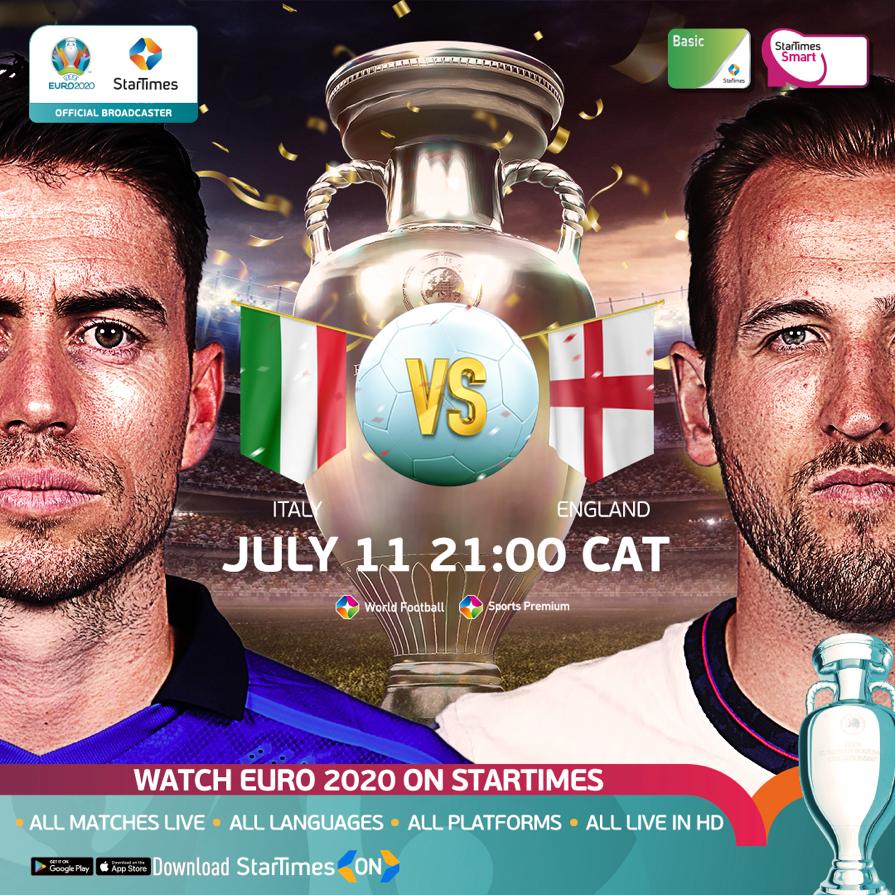 It has been a long wait for England. 55 years to be exact.

On Sunday, England will finally be playing in their second major football final, as they face Italy in the Euro 2020 championship match. The match will be aired on StarTimes.

The last time England played a final in Wembley was in 1966, when they beat Germany 4-2 to lift the World Cup – for the first and only time – and on Sunday they will be looking to win the Euros for the first time.

To get to the final, the Three Lions had to overcome some stiff opposition in the semi-final from Denmark, who took the lead only to lose to an extra-time penalty scored by England’s captain Harry Kane.

Going into the tournament Gareth Southgate’s team were the favourites to win and they have looked impressive – particularly in the knock-out rounds.

England’s success has been built around a solid defence – that has conceded just once in the six matches at the tournament – and the dangermen upfront, Kane and Raheem Sterling.

The two could hardly be more different. Sterling dazzles with his skill and loves to dribble into the box, while Kane is a powerful centre forward who uses his strength and size to be a constant threat.

Italy, meanwhile, earned their place in Sunday’s final with a penalty shoot-out win against Spain, with young goalkeeper Gianluigi Donnarumma being the match winner as he saved Álvaro Morata’s decisive spot-kick.

The Azzurri’s appearance in the final is somewhat of a surprise as they were not considered as one of the top favourites to lift the trophy for just the second time in their history.

But victories against the world’s top ranked team, Belgium, and Spain, can leave no doubt that they deserve to be facing England at Wembley in the championship match.

Coach Roberto Mancini has managed to blend the team into a cohesive unit with veterans like Giorgio Chiellini (36 years) and Leonardo Bonucci (34) marshalling the defence, while going forward 23-year olds Federico Chiesa and Manuel Locatelli have been impressive.

Mancini said that the players had done remarkably well. “I think the players and everyone who has worked with us over the last three years deserves a lot of credit because it has not been easy by any means.

“Almost nobody believed we could do it and yet we are in the final, so we are pleased for Italians everywhere.”

Juventus forward Chiesa said that they were not concerned about playing England at Wembley. “We need to just think about ourselves, as we have done in this tournament. That is what has got us so far.”

And for African football fans watching the match will be like a dream come true. All they need for that to happen is tune in to the StarTimes channels as the continent’s leading digital-TV operator will be showing the final live and in HD.