Rwanda Agricultural and Animal Resources Board (RAB) has explained the reason behind the latest incident of tons of fish dying in Lake Muhazi, in the Eastern Province, leaving fish farming cooperatives counting losses.

On Friday morning, fish farmers on Lake Muhazi, in Musha and Munyiginya sectors, in Rwamagana district, woke up to a sight of dead fish floating in water, estimated to be in tons due to suspected fluctuations in water levels.

The affected are commercial fish farmers and breeders identified as Munyangeyo Themistocles and Roger Shaw, who are now counting losses after the incident which perplexed residents of the area.

Dr. Solange Uwituze, the RAB Deputy Director General for Animal Research and Technology Transfer told KT Press that the fish died from depletion of dissolved Oxygen caused by water turnover in the lake, which triggers a deadly “algal bloom” phenomenon for mature fish during the night because of Oxygen competition between fish and algae. 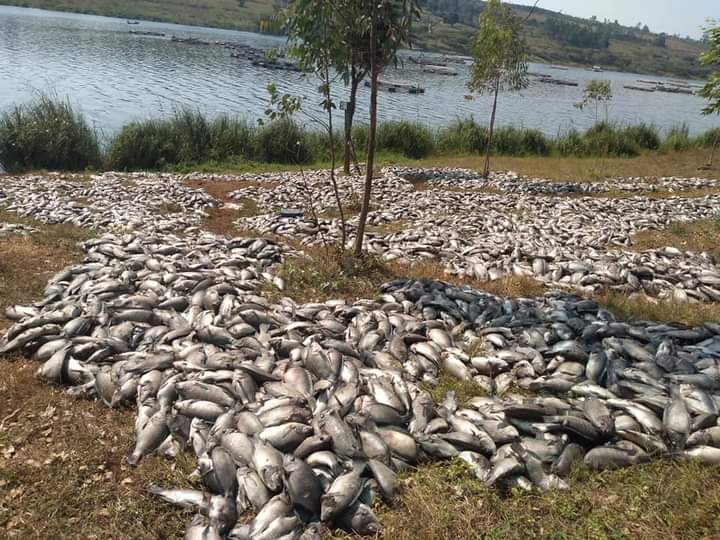 “This problem normally occurs in Lake Muhazi between June and July, where water spillage or turnover causes the groundwater to mix up and down, causing algal bloom, leading to declining oxygen (Dissolved Oxygen) especially at night,”

“We encourage fish farmers to catch all adult fish no later than May. The other measure is to place floating cages far from the shores so that the air entering the water is sufficient. The idea is to float in areas with sufficient depths above 8 meters in depth. In the meantime we encourage farmers to stop feeding the fish until this problem is resolved,” Dr. Uwituze told KT Press.

She said farmers must put enough space between cages and should clean their cages regularly to allow access to enough dissolved Oxygen. Dr Uwituze said that it is forbidden to eat the dead fish because it can pose a danger to human life.

It is the second time fish have died in large numbers in Lake Muhazi this year. A youth cooperative in Fumbwe Sector in Rwamagana District affiliated to the Haguruka Dukore Cooperative, in January, lost tons of fish due to a suspected increase in rainwater that flowed into the lake, mixing with the lake water, causing the disastrous fluctuation.