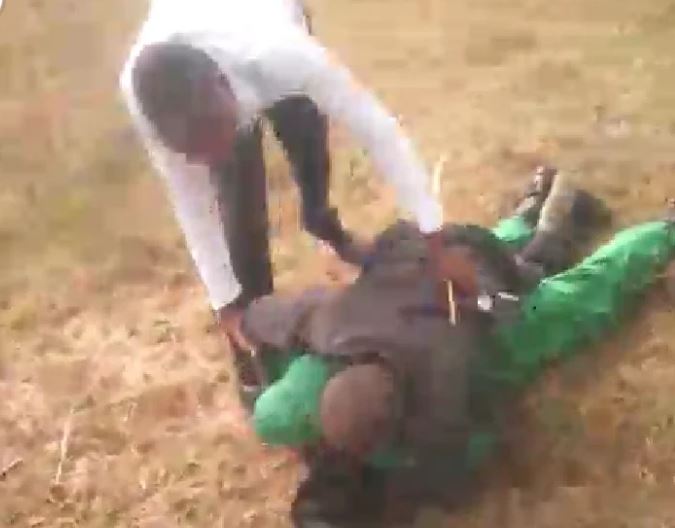 The story of George Safari, caught on video in a physical altercation with a member of the District Administration Security Service organ (DASSO), has captured people’s imagination. Now both the officer, whose name is being withheld, and Executive Secretary, Gabriel Twahirwa, have been suspended indefinitely.

On 25 August, Safari, a resident of Musenyi cell, Karangazi sector, Nyagatare district had taken his cattle to graze by the roadside, a practice that is prohibited, for reasons of safety, for both people and the animals.

He was spotted by a member Dasso, who, accompanied by the Musenyi cell Executive Secretary, Gabriel Twahirwa, were on their regular inspection to make sure cattle herders kept to properly designated areas.

They approached Safari, and according to District Mayor, Claudian Mushabe, the two failed to behave in a manner expected of public officials.

The Dasso officer proceeded to manhandle Safari, and his cow hand. In response Safari fell upon the officer, his arms tightly his neck.

He would only release the terrified officer, who was calling for help, at the pleading of the Executive Secretary. In the now trending video, Twahirwa is heard, insistently pleading with Safari, “Nyubaha Safari, Nyubaha Safari” (pay me heed Safari) over and over again.

“It is not allowed for a public servant to mismanage situations, or act in the way she or he pleases. There is a way public servants are supposed to behave when confronted with tense situations, including calling for support from other officials, instead of escalating the situation”, Mushabe said, explaining why the two officials had been suspended.

The mayor added that any action against Safari for his own violence against public officials, has yet to be decided, as investigations are still ongoing.

Established in 2013, Dasso supports Districts’ law enforcement. Its members are trained by the Rwanda National Police. They are required to conduct themselves in an exemplary, disciplined manner, in the performance of their duties. Above all, they are expected to understand and respect people’s rights.