Kamembe Women Who Threatened Court Officials Get One Year in Jail 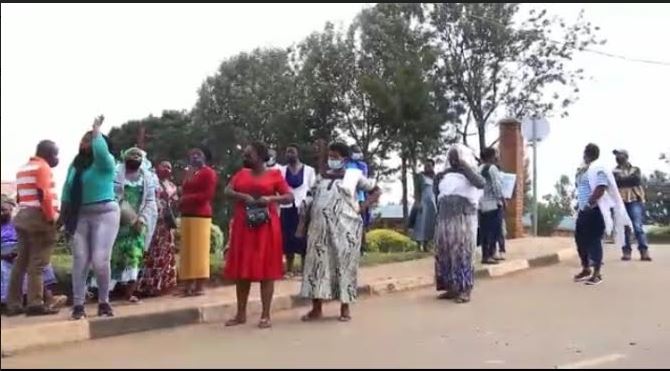 Kamembe Primary court-Rusizi District in Western Province has sentenced to one year in jail a group of eight women who threatened the lives of judges during a ruling on a financial case.

The group  was also slapped a Rwf1 million court fine in a ruling read on August 11, 2021.

This follows a court scandal mid last month in which the octet didn’t concede to a court decision to release a male suspect whom they had accused of embezzling funds in a financial scheme scam.

The incident occurred on July 9, 2021 where about 50 women reportedly stormed the court protesting the release of the suspects who were accused of conning them through a pyramid scheme- called ‘Blessing’.

In the fracas and rumble of verbal disagreements, some of the women were caught on camera (in photos and videos) causing chaos in and outside court, refuting the judgment and threatening court, in media interviews done after a ruling was passed.

A group of eight women was subsequently arrested by Rwanda Investigation Bureau (RIB) following the incident and an immediate investigation was launched into the circumstances around the court saga- which the Supreme Court and RIB condemned as unacceptable.

The suspects were held at Kamembe RIB station pending their trial but prosecution used some of the images to indict and pin the suspected women to a crime of holding court in contempt and threatening lives of government officials while on duty.

The crime of holding court in contempt, and attempting or assaulting court officials, legally gives the suspects a possibility of getting three to five years jail, but not exceeding the latter jail term.

However, the prosecution had sought for each to get one and half years in jail for the crimes committed, but lawyer Nicolas Ruremesha, who represented some of the women, pleaded with the court saying his clients acted out of anger over their lost funds and circumstance in which they lost their money.

However, another defence attorney, Elisée Ndikumana challenged the prosecution on using images that “don’t actually pin any of the women to an actual act of physically assaulting a court official and said this was not sufficient evidence for the court to consider.”

The decision to hand the eight women a one-year jail term can be considered a much lenient sentence following statistical facts that the Kamembe incidence could arguably be the first of its kind to be reported in mainstream media in Rwanda.

Kamembe court stated that the convicted women have a chance to appeal the ruling in a month, however, the court fine has to be paid in not more than two months from the date of the ruling.

According to some lawyers representing the octet, they stated that they will appeal the case to have a fair judgment for their clients.