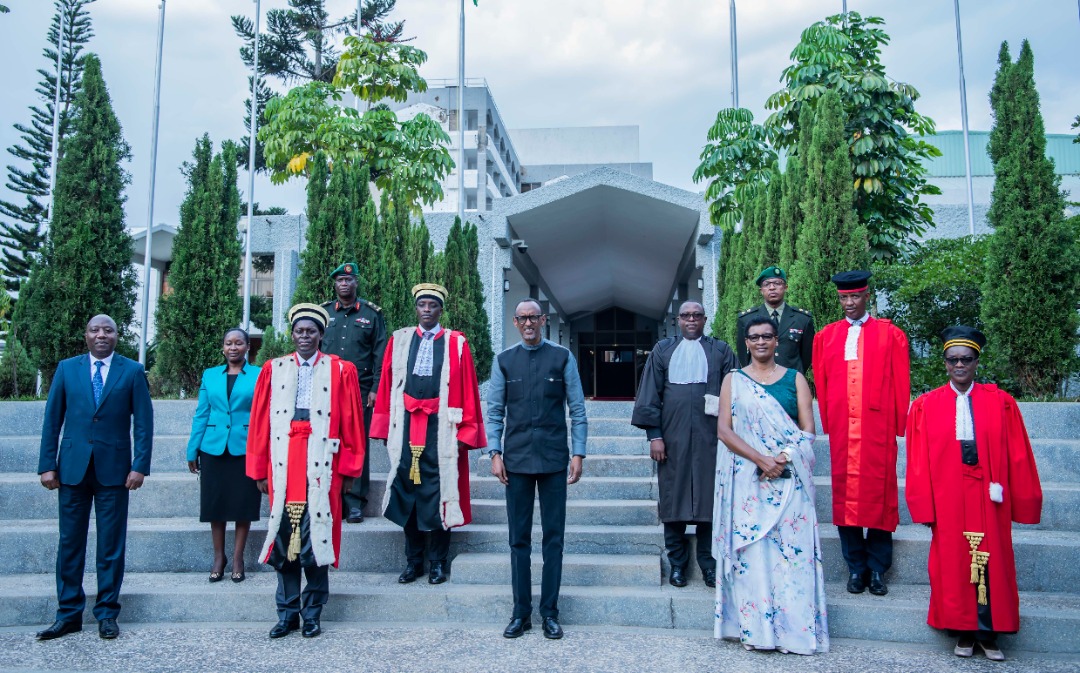 President Paul Kagame has warned Judges and members of the Judicial Sector in general against accepting bribes, pointing out that the practice goes against the principle of dispensation of justice, which citizens expect in courts.

Though Rwanda is credited for effectively combating graft in the Justice sector, President Kagame, while officiating at the launch of the 2021/22 Judicial Year at Parliamentary building on Monday, said that reports of Judges taking bribes to make decisions are still rife, warning that the practice is unacceptable.

“People go to courts hoping that the judges will listen to them, make judgments based on the evidence presented, and as provided for by the law. But we hear some in the justice sector still ask for bribes. This is unacceptable and must be stopped.” President Kagame. 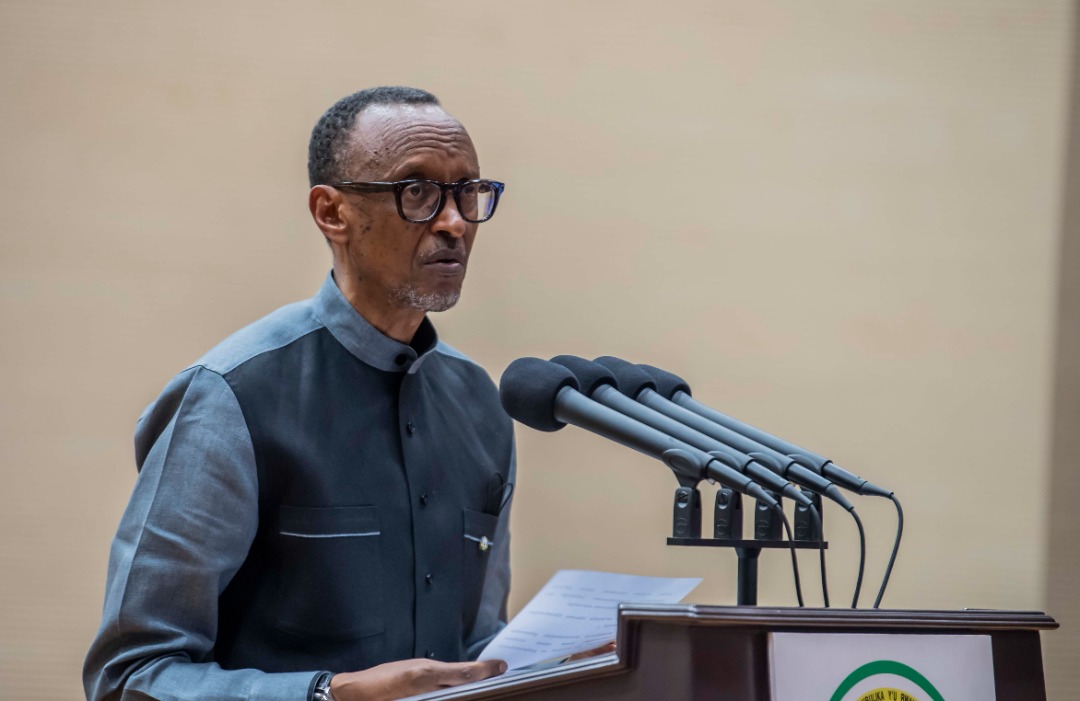 “We have raised this issue many times. This problem must be eradicated,” President Kagame said, citing the Transparency International report, where it was revealed that about 18 percent of bidding processes investigated in public institutions, there were bribes involved, ranging between Rwf1m to Rwf120m.

He said that while these cannot be attributed to the Judiciary, it has a responsibility of ensuring that people who engage in such cases of graft in public institutions are brought to book. 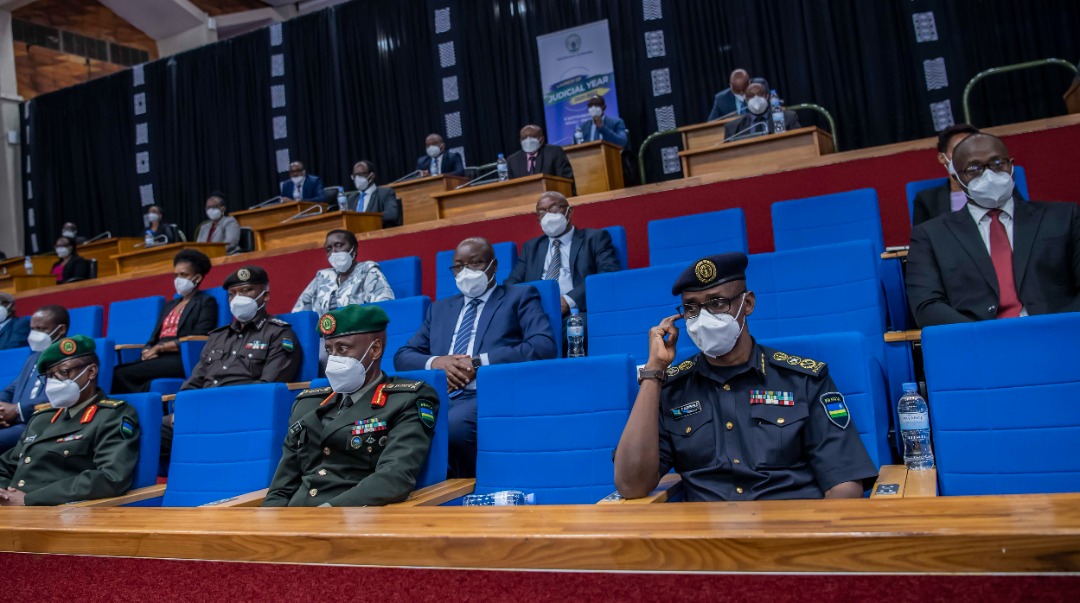 The Head of State urged members of the Judiciary to direct their efforts towards fighting crimes that affect the ordinary citizens, particularly those committed using technology.

President Kagame explained that the government encourages Rwandans to use technology to access services more efficiently, including use of mobile phones and other forms of technology to improve the quality of their lives and therefore they should not be targeted using the same technology. 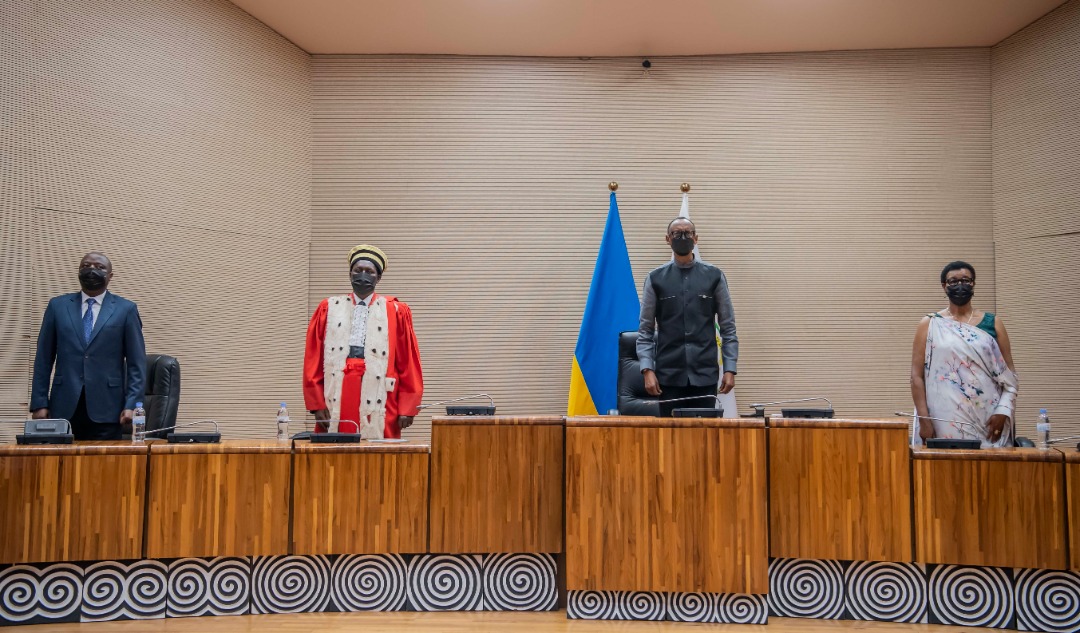 “We need to take steps to protect Rwandans, especially those who do not have enough knowledge, so that they don’t become victims of criminals who target them using this same technology,” he said.

President Kagame said that there is a need to step up the fight against Gender-Based Violence and sexual crimes against women and children, particularly rape and the scourge of teenage pregnancies.

“We are seeing a rise in these crimes. If we are not careful this will become a culture. We need to effectively fight these crimes and make sure that we reduce them tremendously,” 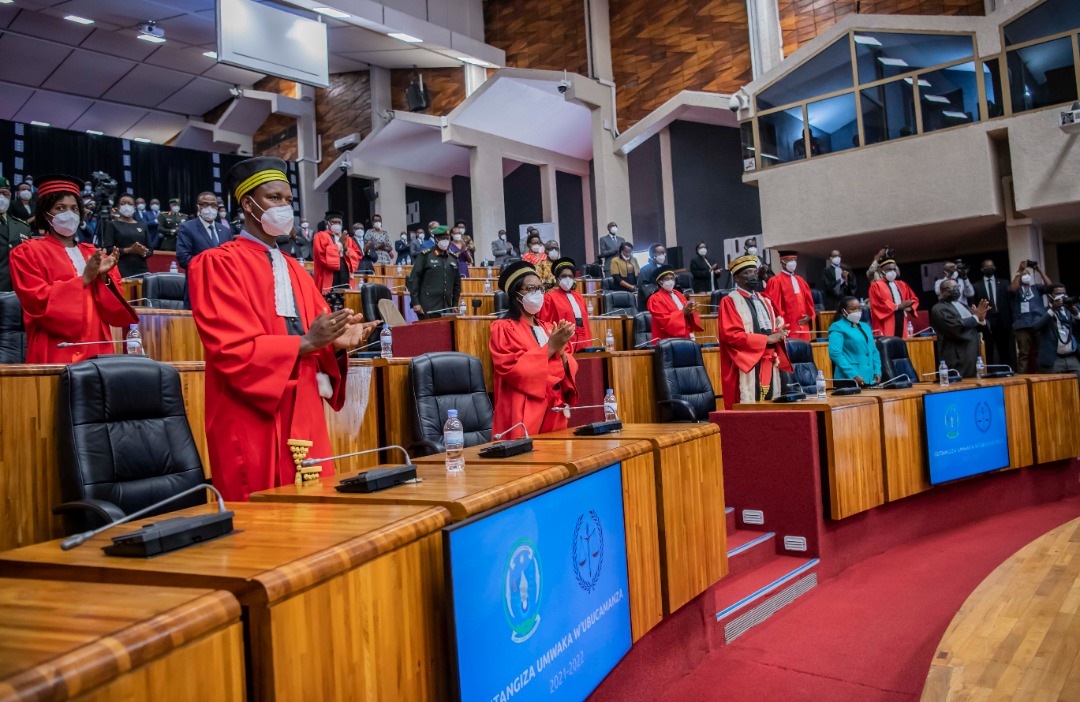 “Measures and penalties should be increased, and it should be clear to everyone that we do not accept these crimes and won’t tolerate them. When you don’t fight these crimes decisively, it gets to a point where it feels like they are acceptable,” President Kagame said.

He challenged Prosecutors to ensure that GBV and sexual violence-related crimes are properly investigated and the perpetrators given severe sentences as a warning to those still engaging in them. 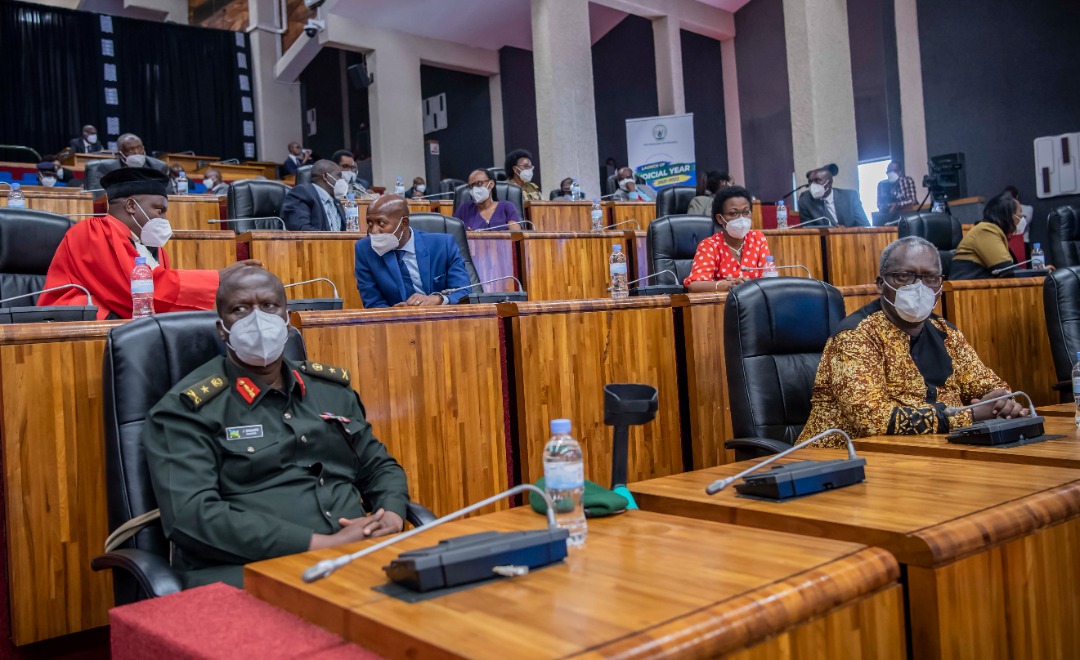 “Those who commit these crimes, their accomplices, especially those covering up such crimes, must be given severe penalties to prevent future perpetration of more similar crimes,” he said 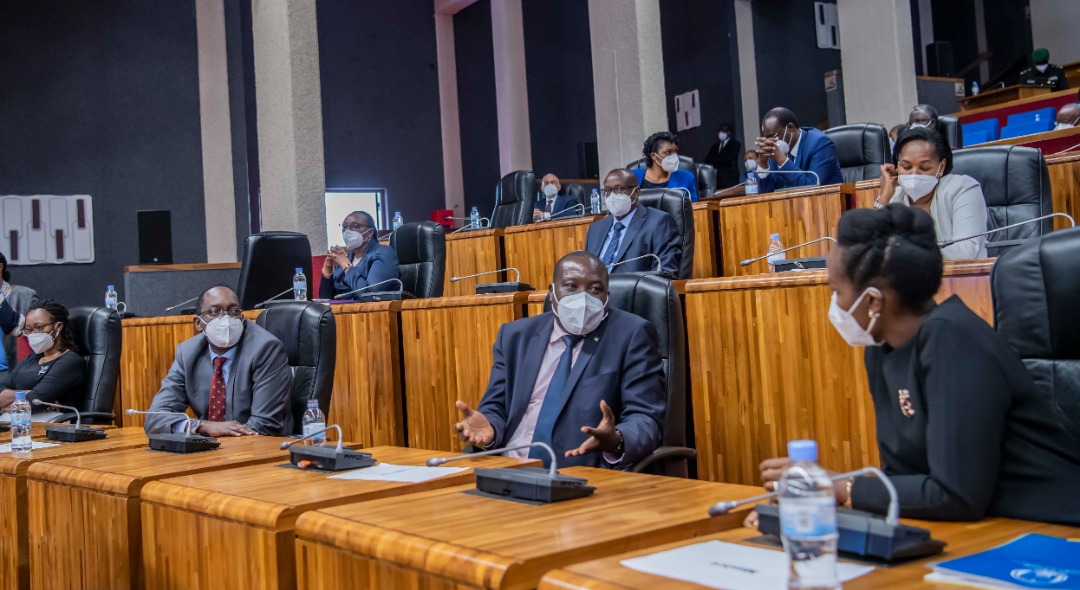 The Head of State pointed out that Rwanda’s Justice sector has continued to grow over the past 27-years, earning trust globally, whereby countries are now sending wanted people to be tried in the country. 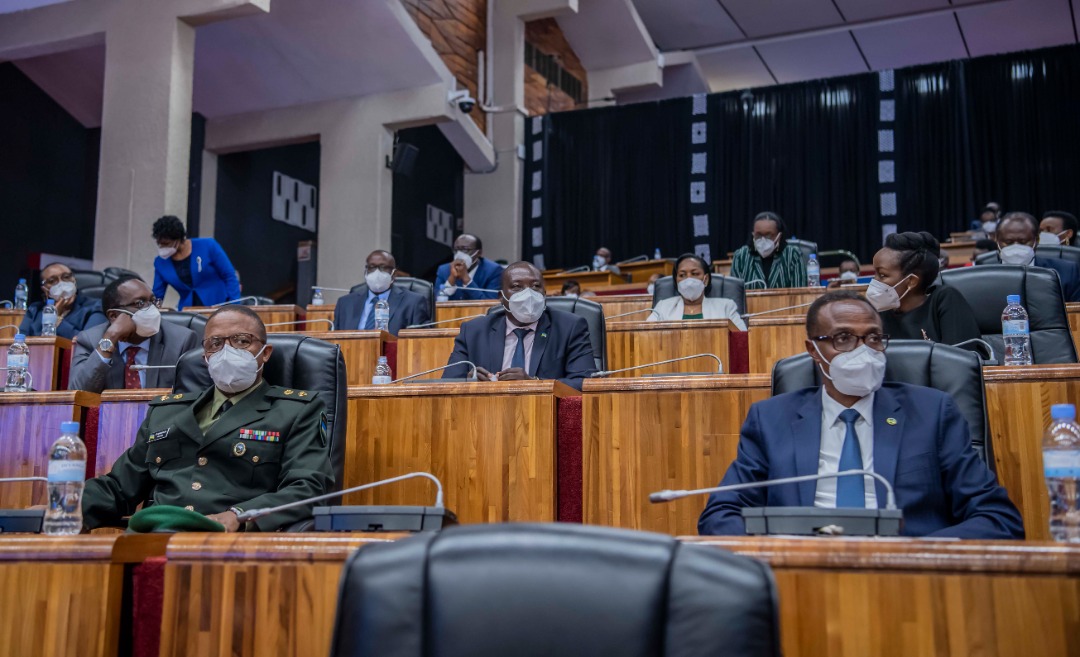 “We continue to have commendable ties with other countries. This has led to some of these countries sending suspects to be tried in Rwanda. This is a pillar on which we are building, and it represents a prosperous and law-abiding Nation,” President Kagame.

President Kagame said that the Covid-19 outbreak affected the functioning of many institutions including the Justice sector but courts continued to use technology to dispense justice to Rwandans. 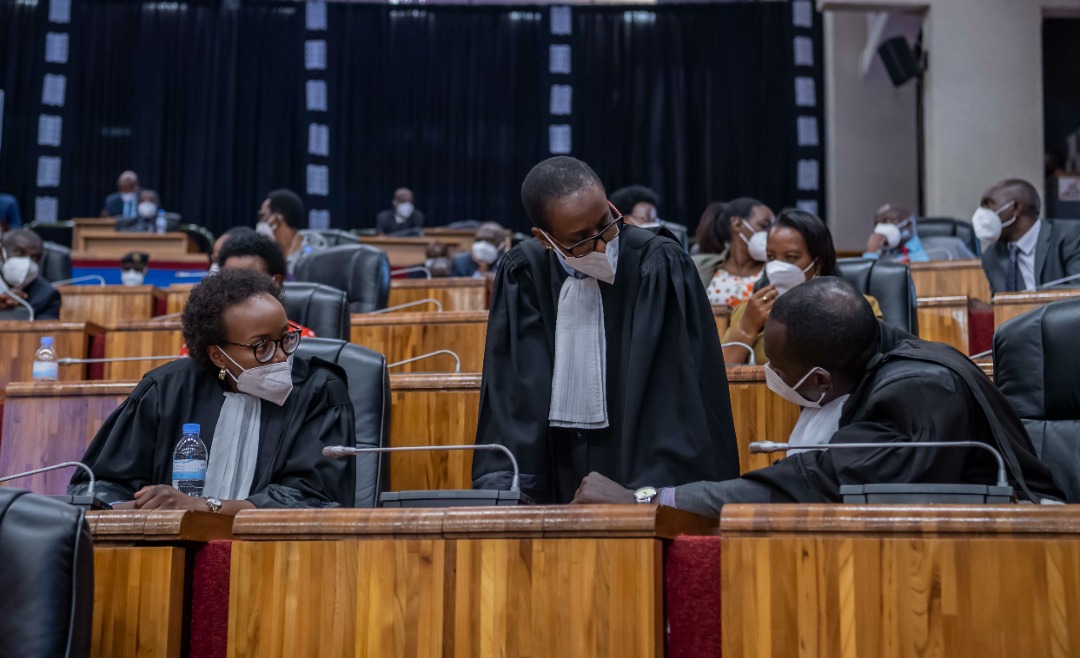 The Head of State said that the government will invest more in digitizing the justice sector, stating that he was informed that more than 420 computers used by Judges are too old and are outdated.

“If this is true, we will work together with the concerned institutions, including the Ministry of ICT, to address this issue as soon as possible,” President Kagame said, adding that the infrastructure the government has put in place should be taken advantage of.

He said that he was also informed that Integrated Electronic Case Management System (IECMS) is facing some issues which will also be addressed as soon as possible.

Among other things, President Kagame urged the Judiciary to find urgent ways to address the backlog of cases, which he said affect the quality of Justice expected. 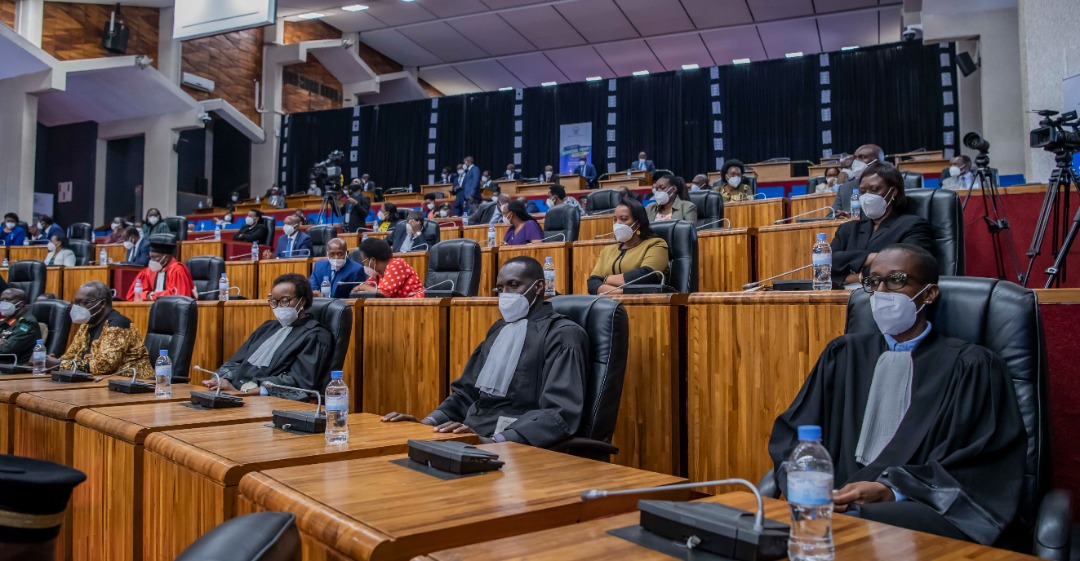 The Chief Justice and President of the High Council of the Judiciary, Dr. Faustin Ntezilyayo, said that regardless of the challenges presented by Covid-19, courts were able to use technology to handle the same number of cases as those the year before.

“We are also pleased with the progress made by the Judiciary in the process of resolving disputes based on conciliation (Court mediation), where in the year 2020-2021, the number of cases concluded in the pre-trial proceedings is 1% higher than the previous year 2019-2020,”

“The number of cases resolved amicably before trial increased by 42%, where judges were able to bring the parties to an understanding in 61 cases,” the Chief Justice said, adding an example where 112 litigants in the Commercial High Court reached an out of court settlement in cases involving over Rwf6bn. 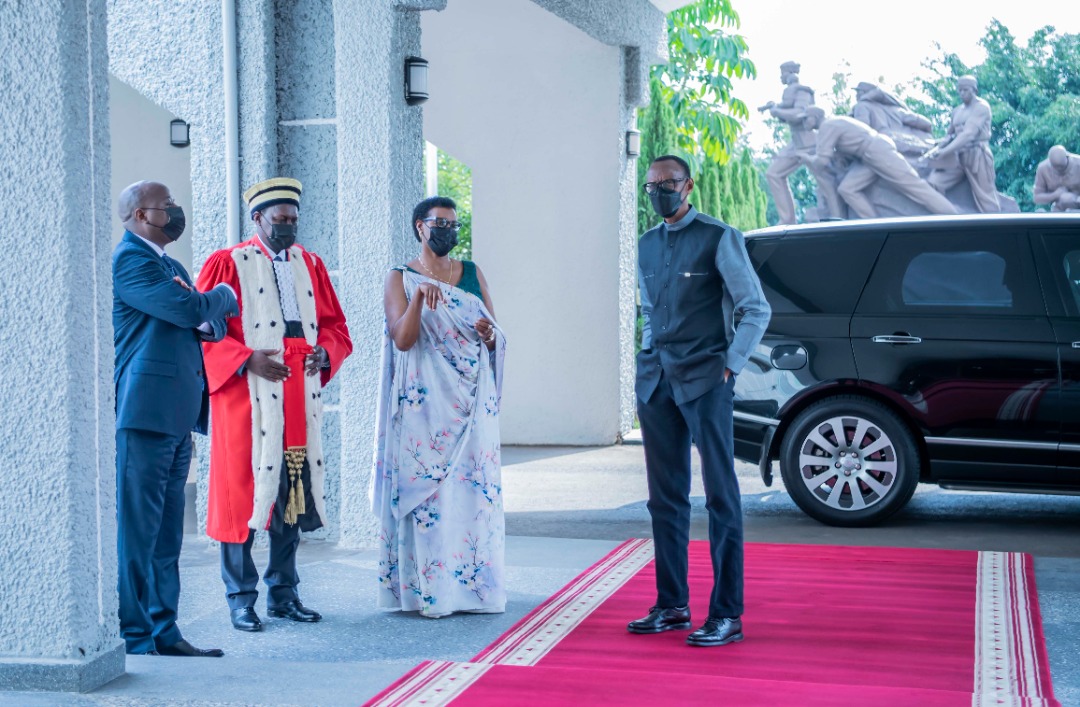 He pointed out that the judiciary, through the judicial council, monitors the performance of judges and other staff and imposes statutory penalties on those who are found to be in violation of the judicial profession standards.

“In this regard, this year, one judge and three clerks were found guilty of misconduct by the High Council of the Judiciary, leading to serious sanctions including permanent dismissal and more,” Dr. Ntezilyayo said.

He pointed out that although the Judiciary has made great strides in the past judicial year, there are still obstacles to overcome in its day-to-day work, including a high rate of case backlog which must be cleared.