It’s 4am, on a  good Monday that is September 20 at Gicumbi Catholic Church guest house. The full moonlight is hanging over the hills.

While back home the talk of the city  was a terrorism case hearing, my teammates were getting prepared to witness the relocation of hundreds of Congolese refugees from one camp to another.

As press, we were there to witness the Government of Rwanda in collaboration with the UN Refugee Agency (UNHCR) relocate refugees from Gihembe, in Gicumbi District to Mahama camp in Kirehe District for their well-being and safety. 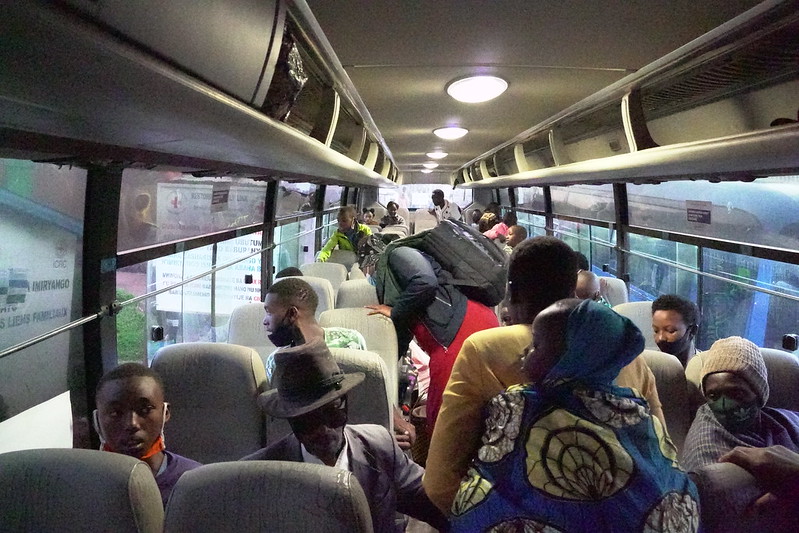 The motive for this exercise is to settle refugees in a better place given that Gihembe camp is located in a high-risk area and is affected by environmental hazards caused by erosion and ravaging ravines, with aging infrastructures.

Concerned refugees had a choice to either be transferred to Mahama camp or register as urban refugees which means in the later that they cannot get direct assistance from the UN agency, one of the officials said.

Depending on their decision, relocated refugees are entitled to the same rights and package of assistance allocated to any other camp or urban refugees in Rwanda according to their vulnerability classification theme.

At Gihembe camp, home to 9,922 individuals (2,277 households) who had spent 23 years in the camp, already 2,392 refugees had taken a decision to transfer to Mahama camp, which is five hours drive from Gicumbi, through Kigali to Kirehe, near the border of Rwanda and Tanzania.

Early morning, at camp entrance, families composed of mainly women and children were already packed and ready to move into the fleet of buses parked in the center of the camp entrance. 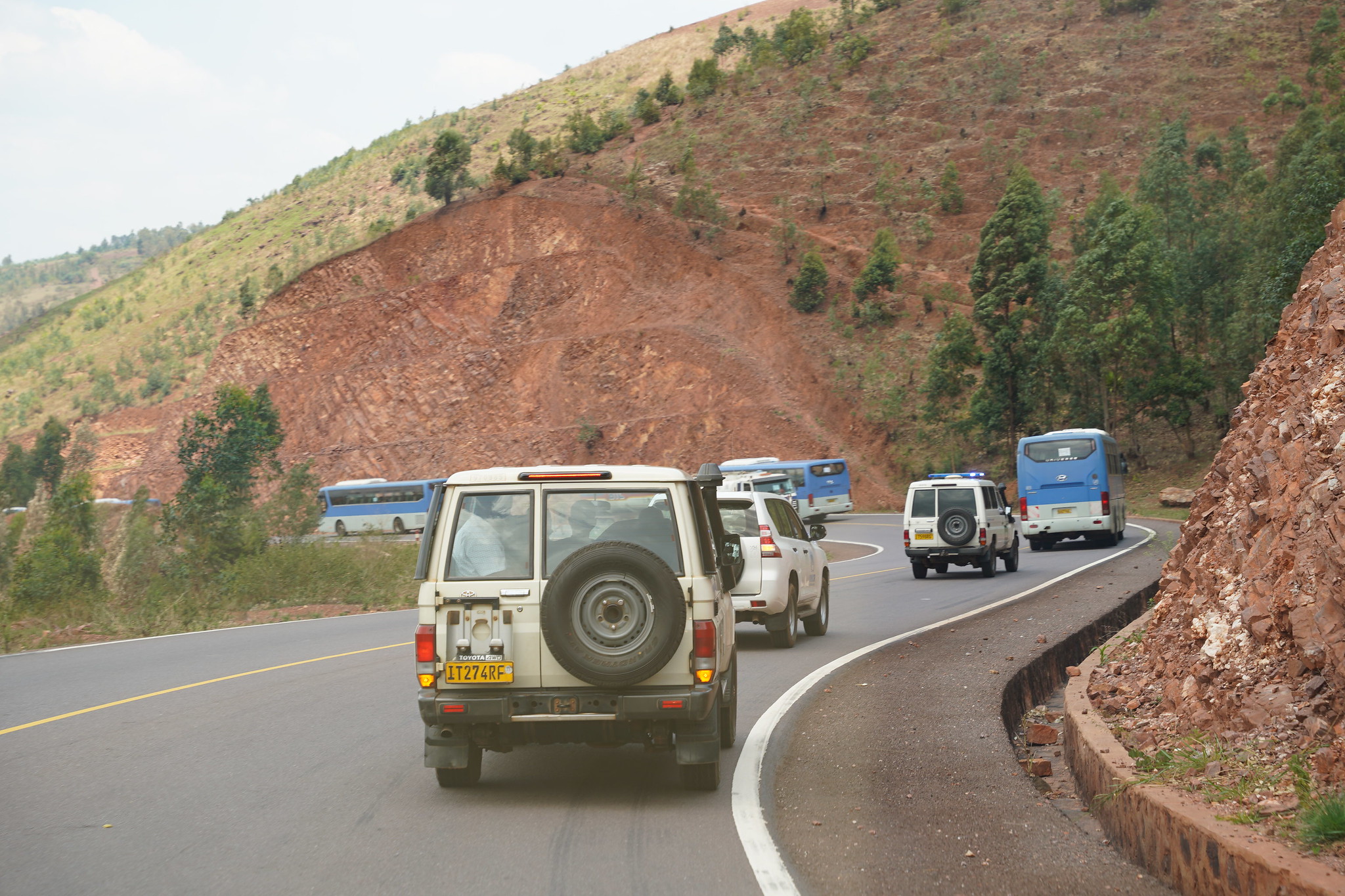 Three young refugee boys pose for a photo, the last one at the camp, but after taking the pic, I am pulled by their wide natural smiles on the face, even when they told me that they don’t know what to expect in Mahama.

Not only children were not sure but the adults too- most of them said they are not sure of what to find at the new camp, but one thing stood out strongly among children and adult refugees- the different weather.

The big question lingers in my mind- why relocate these refugees from a camp where many say they have lived for the last 23 years, made children, families and built businesses. 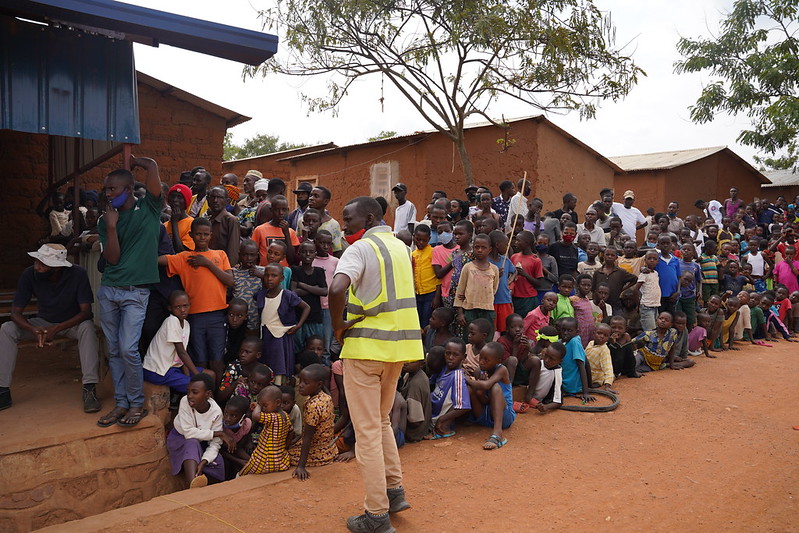 Sooner or later I started getting the answers. The UNCHR Deputy Country Representative, Boubacar Bamba said that the relocation was necessary because of the environmental risks registered in the Gihembe especially that the camp is being surrounded by ravines.

I was not convinced until we drove to Sector 12 (located in the ravine prone areas) of the camp where the highest risks can be seen.

“We have cases of minor injuries reported among refugees falling into ditches at night and this is dangerous for anyone, for instance I am one of the victims,” Murebwayire says.

As we head to sector 12, an official of the ministry of disaster management says the area had four ravines and in range of few months, it has 12- which are potentially increasing with time and could lead to a landslide carrying away some refugee makeshift houses on the hills.

In sector 12, we finally come face to face with reality. Down below is a valley so deep, surrounded by mud houses which were formerly occupied by refugees. Human scavengers are picking out the last remains of useful property but a look at the roofless houses in which the refugees lived in, I begin to get a sense of danger and wonder how one can actually live here.

This feeling conveniences me, as to why government and the UN agency decided to relocate the families on the Kageyo hill.

On top of the hill is Fidele Kaliningabo who has lived in the camp from day one (for 23 years). He is grazing his three Frisian cows and looks unbothered about relocating just like some of the few boutique business owners in the camp. 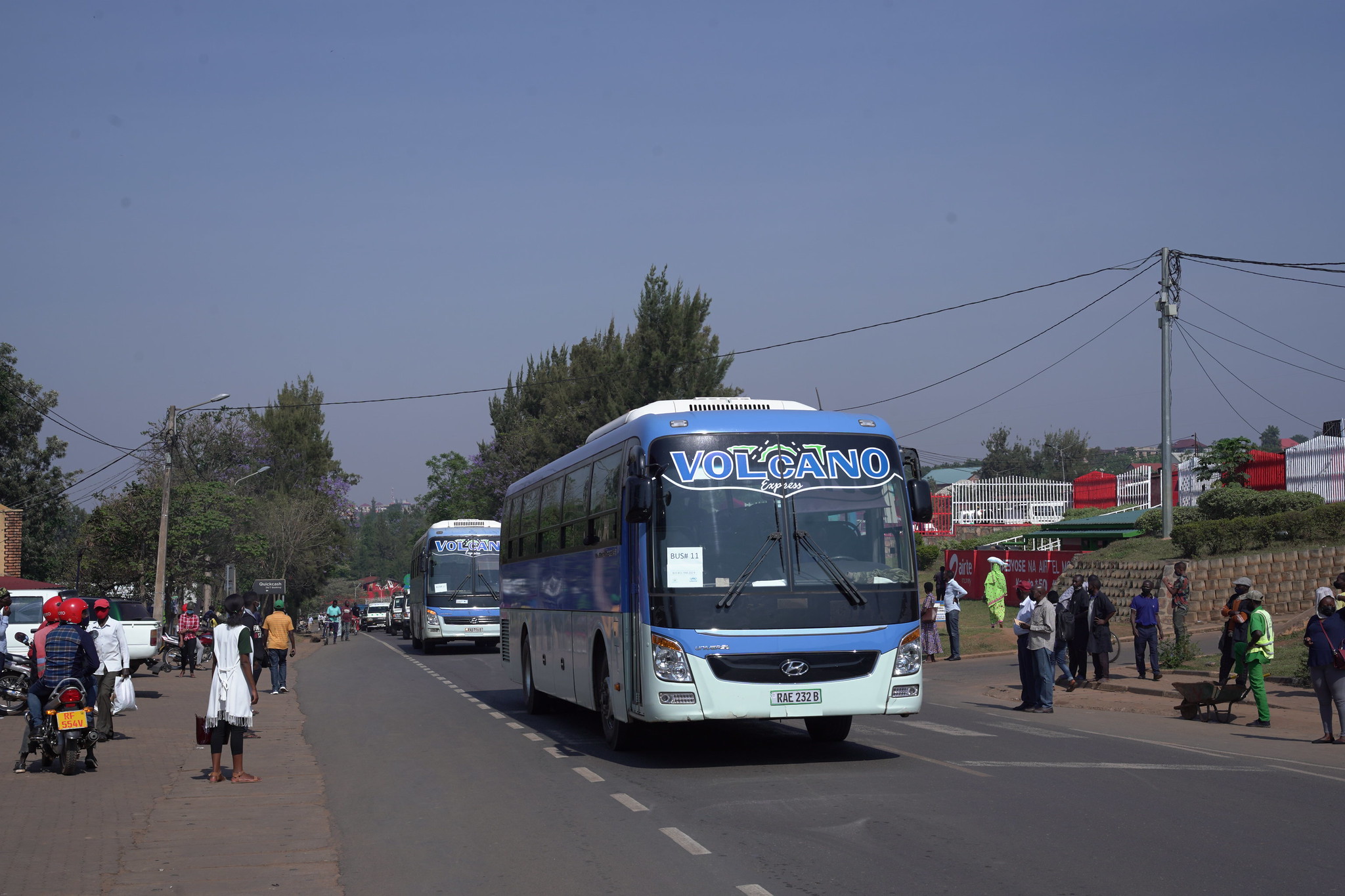 His reason is he is negotiating how he can retain his cows which earn him $3 a day and remain a camp refugee. He says this decision will have to be taken before October 4, when his relocation timeline is due.

Officials tell me that if Kaliningabo relocates to Mahama he would have an option to find a grazing place outside the camp or else stay in Gicumbi as urban refugee.

As he contemplates this decision among the remaining families set to be relocated by December 2021, the rest of us and refugee families (carrying simple personal luggage, solar panels and cooking equipment) hit the long trip from Gihembe to Mahama escorted by Traffic police and UN agency trucks front and back.

I am told that the reason why the refugees are traveling light with only personal belongings is because a fleet of hauling trucks had transported other property a day before.

It’s 6.30AM, we hit the road trip- one that is so long that most of us forget the cold weather and the ravines left behind; as see new paved road stretches and curving along the way, but also due to COVID19 restrictions we witness the comfort of refugees traveling with only a handful of persons (five families) in a bus meant for over 70 passengers. 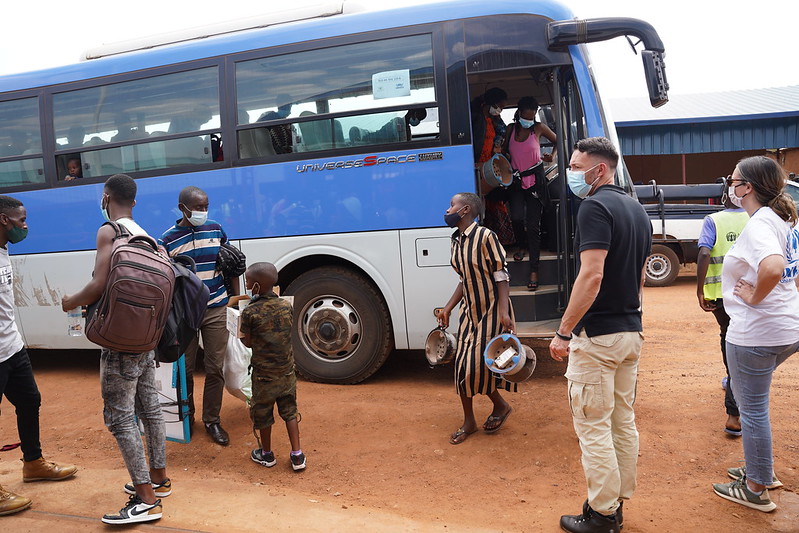 Along the way, the weather turns warm and warmer. We make one major stop over at Mushya sector- for refreshment and draining out body wastes. This takes an hour and we are back to the road.

Due to social distancing and COVID19 test restrictions, the on looking Burundians are separated by a fence but can watch their Congolese counterparts alight and walk straight into a COVID test camp before entering a quarantine area inside the camp.

In my mind am asking myself how the new families will be welcomed, if there is space in Mahama. I am told that over 30.000 of the 50,000 Burundian refugees in Mahama have left for home. One Burundian refugee says that since all groups speak Swahili, integration will be easier. 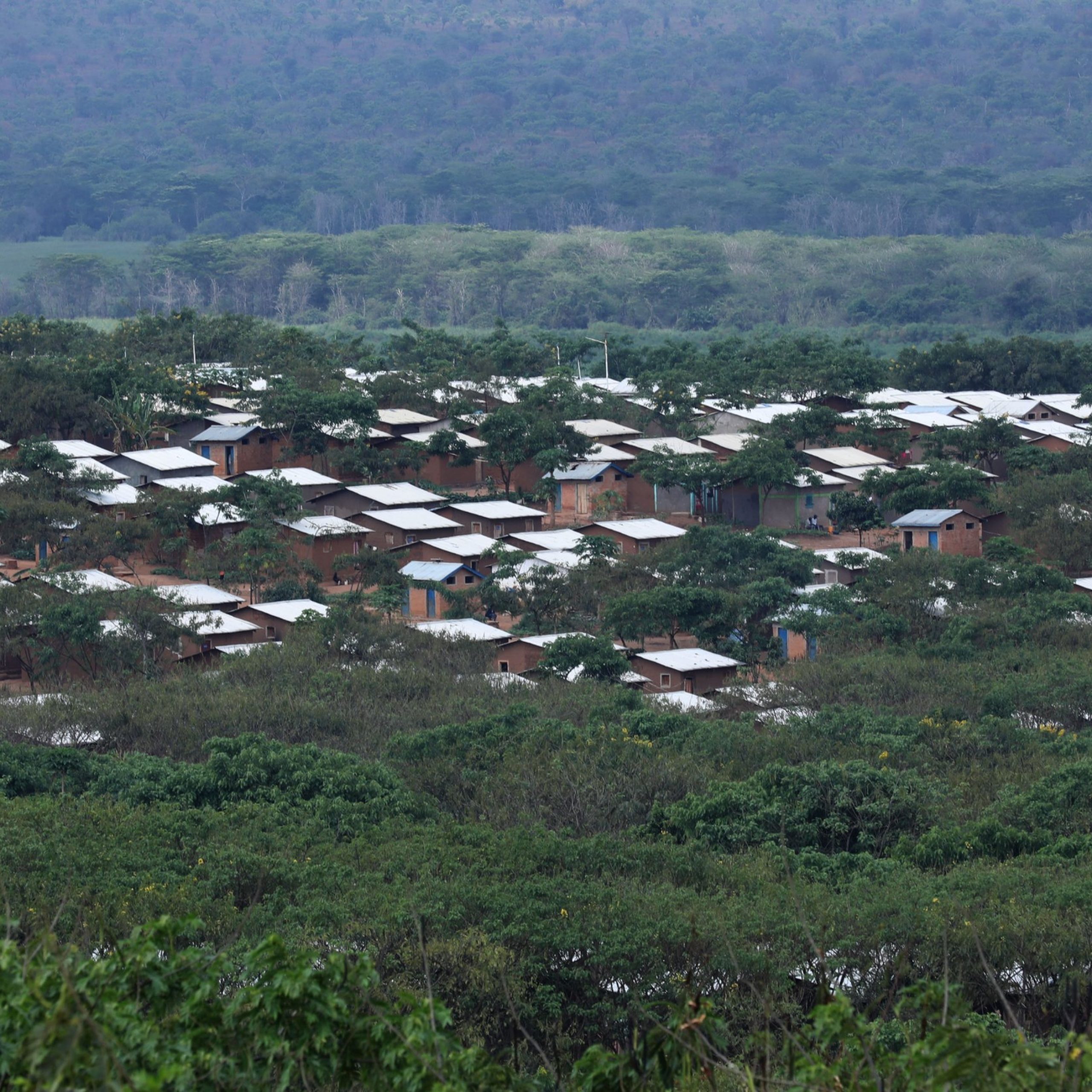 However, some incoming refugees who had business murmur about worries of paying taxes on business in the camp- a legal UN requirement for all refugees to abide by country laws, which most have not been used to in Gihembe.

These worries are calmed when the concerned refugees are told to look at the bigger picture of more client based in Mahama compared to Gihembe.