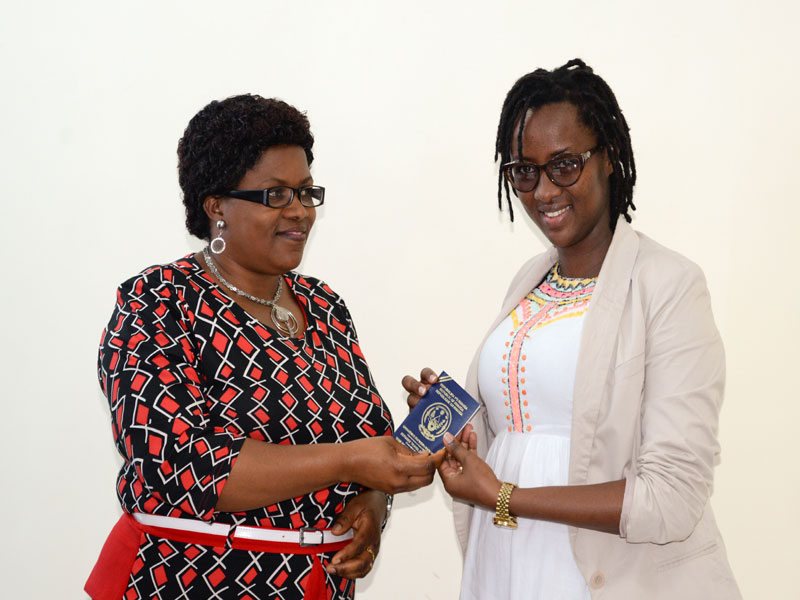 Rwanda has introduced a digitally readable passport to refugees to allow them free movement across the world like any citizen.

According to Rwanda Directorate General of Immigration and Emigration, issuing the new Machine Readable Travel Document (MRTD) to refugees will facilitate storage of accurate data, control forgeries and allow relevant law enforcers to securely verify and authenticate the travel document.

“This is a very small event, but of a demonstration of the Government of Rwanda’s continued Commitment towards global responsibility for reception and protection of refugees,” Anaclet Kalibata, Director General of Rwanda’s Directorate General of Immigration and Emigration, said on Wednesday – October 10 at the launch of the passport in Kigali.

This passport was produced by Rwanda Immigration and Emigration Directorate in collaboration with Rwanda Ministry of Refugee Affair and Disaster Preparedness (Midimar) and the UN refuge agency- UNHCR.

At the launch, six passports were issued to applicants as a sample, but Kalibata said that his office printed 20,000 copies.

The features of the passport of refugees are the same as the citizen’s passport, except the mention on the cover page, that, it is issued to refugees.

For a refugee to get a passport, they are required to present documents that testify that they are refugees.

The document is delivered by camp representatives if the refugee is in a camp or local leaders for refugees in Rwandan community.

“I commend all the partners and the government participation for being able to achieve this activity where we believe that refugees from now will be getting travel documents allowing them to travel wherever they wish to go, except to their country of origin.”

Kalibata said the travel document they got make them free like any other Rwandan to be able to go out for studies, medical treatment and to look for jobs.

Ahmed Baba Fall, UNHCR Rwanda Representative expressed his gratitude for the success of the new refugee travel document, which came to replace an old document that was not readable in different countries.

“It could not be scanned by machines in other countries. So it was difficult for us to evacuate people who were sick for example,” Fall said adding that it is a new era to celebrate that now refugees can have a travel document that meet international standards.

The new machine readable refugee travel document is the third document issued to refugees in Rwanda.

Rwanda first issued a refugee travel document in 1972 to Burundian refugees who were in Rwanda and it was sold at Rwf 4,000 with a validity of one year.

The latest refugee travel document issued to refugees in Rwanda dates from 2003. It could not be read by immigration and emigration machines and it was ordered from Switzerland and directly issued by the UNHCR to emergency cases.

It was sold at Rwf 5,000 and it was valid for 2 years. In the contrary, the current passport was designed and produced by Rwanda.

For Rwanda Minister of Disaster Management, Jeanne d’Arc de Bonheur, the new refugee travel document is a very big success for Rwanda because getting a travel document for refugees used to go through a long process.

“This travel document opens borders for you in all your businesses and for your self-reliance,” she said advising them to use it for legally accepted services.

The issuance of the new machine readable travel document supports one of the four commitments made by the Government of Rwanda at the 2016 leaders’ summit on refugees in Geneva to start issuing documents to all refugees in Rwanda.