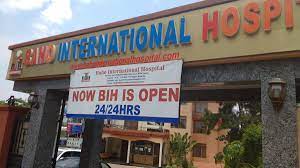 Rwanda Investigation Bureau (RIB) has arrested two doctors from BAHO International Hospital (BIH) as part of the ongoing investigation into the death of a female patient.
RIB said that the deceased female patient, 54 years (names withheld on purpose) died on September 9, 2021 and investigators are doing their job to find circumstances surrounding her death.
“The suspects are two male doctors, a Gynecologist and Anesthetist. Findings of this investigation will be communicated later,” Dr. Thierry B. Murangira, the RIB Spokesperson told KTPress this Friday evening September 10, 2021.
The incident drops in at a time when the hospital located in Kigali went through social media crossfire barely two months ago.
On July 10, 2021, a concerned citizen raised a complaint on Twitter saying that medical practitioners appointment sought at 10am and instead received attention at 1pm.
In the twist of all this exchange, RDB rebuked the hospital for not taking blame and use it to rectify areas in which clients had raised concerns.
“How will you change if you can’t even be humble enough to take feedback or comment after thoroughly investigating the complaints? This false confidence isn’t good for service delivery,” said RDB CEO Clare Akamanzi on July 12, 2021 using Twitter.
Two days later as the arguments went viral, the hospital bowed to social media pressure and apologized through a statement saying they were sorry for the way they handled the concerns.
“We (BIH) would like to express our sincerest apology to the public and especially our patients who we have let down recently in our customer care,” BIH Chairperson, Joseph Kayibanda said.
In the meantime, the Ministry of Health is yet to release its findings after the Minister Dr. Daniel Ngamije promised a quick assessment to be conducted on the hospital’s service and quality of health provided.