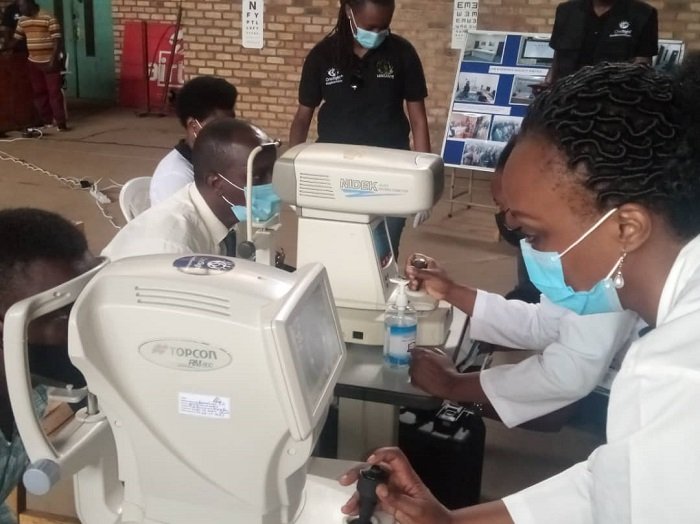 Eye care specialists have said that young people could be on the onset of common eyesight problems.

The warning comes after 218 students from University of Rwanda (UR), Huye campus were tested to see their status on vision.

Samples taken between October 12-14 indicated that out of that sample, 118 students(equivalent to 54.1%) have vision impairments.

Dr Christian Ngarambe, Director of University Teaching Hospital of Butare (CHUB) said 118 have vision problems, the condition that required further diagnosis in other parts of the country.

Among those who tested positive, 30% had longsightedness (difficulty to see nearby objects) and 25% had minor vision challenges, but could also be advised to use eye glasses.

“If 54.1% have vision problems in the university only, it means it could be a common health problem in the country. people could be living with vision impairments unknowingly,” Dr. Ngarambe said.

He advised the affected students to seek medication service at CHUB.

According to a report released in 2012 by the World Health Organization, one out of every 100 people in Rwanda is visually impaired.

However, data from the Rwanda Health Management Information System (RHMIS, 2016) showed that in health centers, eye diseases are the fourth cause of morbidity with a total of 638,080 consultations.

The RHMIS says, in Rwanda, the major causes of blindness are untreated cataract, glaucoma, age-related macular degeneration, and other posterior segment causes (diseases of the retina, choroid and optic nerve).

The Ministry of Health’s study conducted in 2018 indicated that over a third (34.0%) of the population with eye health problems could benefit from Primary Eye Care offered in health centers, and the most common cause was ‘conjunctivitis’.

Allergic conjunctivitis is inflammation of the conjunctiva, which is the tissue that covers the inside of eyelids, as well as the white part of the eyeball.

The allergic conjunctivitis is one of the leading causes of consultation in health centers and district hospitals (80% of total eye cases) and affects mainly children, while 30% of people aged 40 and above had a need for reading glasses, according to the Ministry of Health.

Speaking about the vision problems in students last year, Dr Rose Baguma, Director General of Education Policy & Planning in the Ministry of Education said that eye problems affect pupil’s performance and later on the human capital when they finish school.

This year on 14 October, Rwanda joined the rest of the world to celebrate World Sight Day.

According to World Health Organisation (WHO), globally, at least 1 billion people have near or distance vision impairment that could be prevented or has yet to be addressed.

“Vision impairment affects people of all ages, with the majority being over the age of 50. Vision impairment and blindness can have major and long-lasting effects on all aspects of life, including daily personal activities, interacting with the community, school and work opportunities and access to services,” WHO message on the world sight day reads.