A friendship built on mutual trust and treating each other as equals -that is the definition of the bilateral relations between Rwanda and China and that is the key message that was echoed as the two countries embarked on celebrations to mark half a century of cordial ties.

It is an approach that worries the West and China’s critics who lament about the Asian giant’s influence on the African continent but it also partly explains why Sino-Africa relations have thrived in recent decades -mutual respect.

In his message to mark the 50th anniversary of bilateral and diplomatic ties, the Ambassador of the People’s Republic of China to Rwanda, Rao Hongwei reiterated the approach, stating that the friendship is not just built on mutual trust but also respect.

“On 12, November 1971, China and Rwanda established diplomatic relations. From then on, our two countries have been closely linked to each other,” Amb. Hongwei said, emphasizing it with a Rwandan proverb that says that “the fate of two fingers is to live together.”

The proverb holds a strong meaning in the Rwandan context in the sense that two fingers cannot afford to live apart and none of the fingers can claim to be superior to the other, because ultimately, they need each other to function properly.

Amb. Hongwei said bilateral ties between the two countries were strengthened further after the liberation struggle and the 1994 Genocide against the Tutsi, with the ruling party, Rwanda Patriotic Front (RPF-Inkotanyi) forging a strong friendship with the Chinese Communist Party (CPC), China’s ruling party.

Over the past 27 years, bilateral ties between the two countries have flourished, or in Amb. Hongwei’s words, have grown in breadth and depth over the years.

“As time went by in half a century, the ties between China and Rwanda have grown stronger and closer. We respect each other and treat each other as equals,”

“Our leaders, President Xi Jinping and President Paul Kagame meet frequently and exchange at various levels and this has continued in recent years,” Amb. Hongwei said on November 8 during the official ceremony hosted by the embassy to mark the 50th anniversary.

The Chinese envoy said that over the years, the two countries have developed high-level political mutual trust, making bilateral relations “as stable as a great rock in the face of any changes in the international situation.”

As a result of the flourishing relations, trade and economic cooperation between Rwanda and China drastically increased in the past two decades or so, making the Asian country Rwanda’s largest trading partner and largest project contractor in infrastructure development. 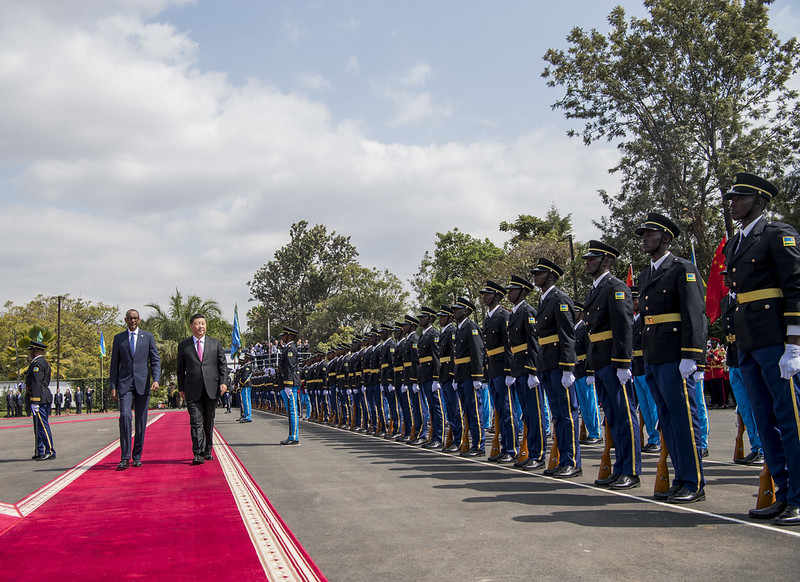 According to Amb. Hongwei, as of 2020, bilateral trade between China and Rwanda hit $321 million, despite the Covid-19 impact and as the Minister of Foreign Affairs and Cooperation, Dr. Vincent Biruta said on the occasion, China now ranks among the biggest investors in Rwanda.

Dr. Biruta said that more particularly, the friendship was strengthened after the 1994 Genocide against the Tutsi, with China getting more involved in different strategic sectors in Rwanda.

“We have worked hand-in-hand to strategically, develop our political and social economic ties. China currently ranks, among the top largest investors in Rwanda, which has created thousands of jobs in different sectors,” Dr. Biruta said.

“Supported by the increasing high level political interaction and exchanges, our bonds of relationships have flourished at all levels,” he said.

In his own words, Minister Biruta said that this momentum leads towards the fulfillment of the economic and trade commitments of the Forum on China-Africa Cooperation (FOCAC) Beijing Summit and the consensus of China Africa Summit on solidarity against Covid-19.

By keeping her word and commitment, exemplified by country’s recent support in the fight against Covid-19, China increasingly cements her presence on the African continent by seeking mutual cooperation between countries.

With Rwanda, the strong ties have been strengthened by Presidential visits on either side in 2017 and 2018, which opened up further different areas of cooperation and engagement.

According to Dr. Biruta, the two countries committed to boost bilateral ties further at the 8th session of the Rwanda-China Joint Committee on Economic, Technical and Trade, which virtually convened on September 28, 2020.

\The two countries agreed to deepen further trade and investment in line with Rwanda’s Vision 2050 and China’s Belt and Road initiative, which are expected to feed into each other in the years to come.

Dr. Biruta thanked China for the support it accorded Rwanda in the fight against Covid-19, with the Asian country donating 500, 000 doses of vaccines while earlier in the middle of the pandemic China donate medical and personal protection equipment.

According to Amb. Hongwei, since 1982, China has dispatched, 21 medical teams to Rwanda with a total of 258 doctors providing medical services to more than 700,000 Rwandans.

Amb. Hongwei observed that the flourishing ties between the two countries are not a coincidence but they are rather a result of like-mindedness and perhaps the ideology of CPC and RPF-Inkotanyi.

“We both maintain that all countries, big or small, strong or weak, are equal. We both cherish national sovereignty and independence and resolutely oppose any interference in our Internal affairs by any country or external forces,” the Chinese envoy pointed out.

Both Rwanda and China believe in a political system that suits the national conditions and choices of the people and as Amb. Hongwei put it, the peoples of the two countries share characteristics of being strong, unyielding, optimistic, hard-working and kind-hearted.

Over the past 50 years, Amb. Hongwei noted that China-Rwanda relations are at their very best in history, with several key milestones registered in the past couple of years, characterized by President Xi Jinping’s visit in July 2018, which was the first visit of a Chinese President to Rwanda.

A total of 15 cooperation agreements to boost trade, infrastructure development, agriculture, education and other areas of interest were signed during President Jinping’s visit, laying the foundation for more decades of cooperation.

The friendship did not just stand the test of time but it also set the momentum of what should be expected in the next 50 years.