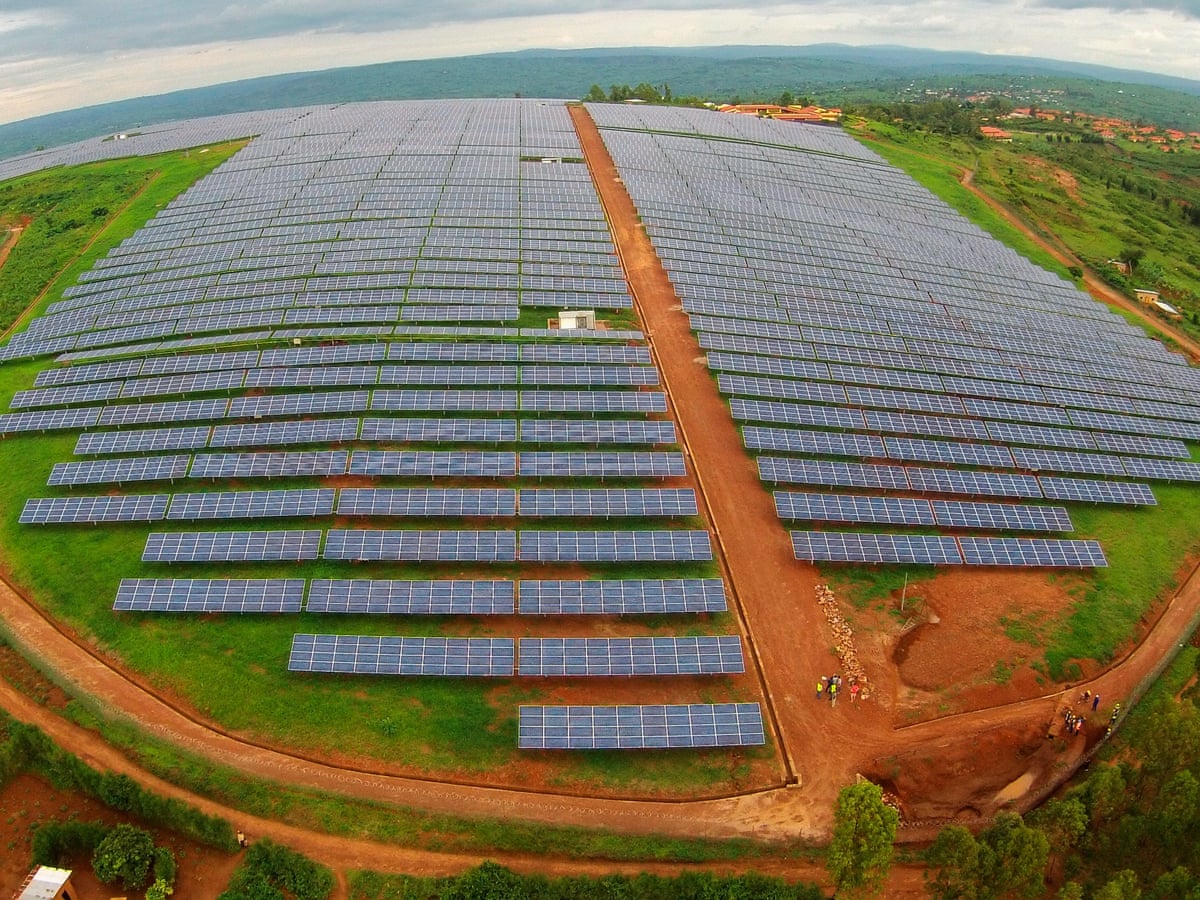 The world is in a race for a climate mitigation agenda aimed at averting the eminent dangers posed by climate change. As the global leaders gather in Glasgow, UK for the COP26 UN Climate Change Conference, energy transitioning has emerged as an important pillar of addressing climate change. The International Renewable Energy Agency (IRENA), headquartered in Abu Dhabi, is on the right course of rallying multilateral efforts behind energy transitioning as a pathway to a sustainable future.

With 166 member states, IRENA stands out as a uniquely global energy hub and a source of guidance and support for stakeholders across the world. Through its 2021 World Energy Transitions Outlook, the Agency presents to member states policy frameworks necessary to advance a transition that is aligned with a global net zero future, while being just and inclusive.

With over 300 partners collaborating under IRENA’s climate investment platform, stakeholders with viable projects in renewable energy and climate investment around the world can bank on the Agency for resource mobilization. By 2020, the IRENA/ADFD Project Facility resulted in the selection of 32 renewable energy projects that benefited from $350 million in concessional loans and improved lives of over 2.5 million people around the world.

In Africa, IRENA has supported different national and regional programs and initiatives including Africa Clean Energy Corridor, a regional initiative to accelerate the development of renewable energy potential and cross-border trade of renewable power within the Eastern Africa Power Pool (EAPP) and Southern African Power Pool (SAPP). This is in addition to West Africa Clean Energy Corridor, a regional initiative supporting the creation of a regional power market in the West Africa Power Pool.

Energy transitioning has emerged as an important pillar of addressing climate change, one of the critical global challenges of our time. Carbon dioxide levels and other greenhouse gases in the atmosphere worsen the global warming, affecting lives and disrupting economies.

In the face of such challenges, mobilizing collective climate action is very vital in pursuit of environment-saving initiatives and global climate targets of limiting global temperature rise to 1.5°C and a net carbon zero future by mid-century under Paris Agreement and the Climate Ambition Alliance. Within this global framework of saving the environment, the Kigali Amendment to the Montreal Protocol signed on 15th of October, 2016 in Kigali – Rwanda is another landmark global commitment to reduce the production and usage of powerful greenhouse gases in a move that could prevent up to 0.5 degrees Celsius of global warming by the end of this century, while continuing to protect the ozone layer.

For Rwanda, whose first Permanent Representative Ambassador Emmanuel Hategeka presented his credentials to IRENA on 3 May 2021, increasing the share of renewable energy is enshrined in a clear national vision of becoming a green, climate resilient and low carbon economy by 2050.

Advancing environmentally friendly practices is an integral part of Rwanda’s development. This is further emphasized in a statement from H.E President Paul Kagame speech at a Climate Change Panel at World Economic Forum – Davos in January 2015: “As we look forward to development, we are not making a choice between environment and prosperity. We are rather looking at how we combine both because one supports the other.”

Rwanda targets to achieve universal access to electricity by 2024 with a production capacity of 556MW of which renewable energy will constitute 60% of the energy mix mainly from hydro projects and solar energy. As of end August 2021, access to electricity in Rwanda is recorded at 65.4% with 47.6% grid connections while 17.8% accounts for off-grid connections. The current installed power generation capacity is 235.6MW.

Solar power is also expected to contribute a significant share of electricity generation with solar power plants connected to the grid currently at 5% but as technology improves and prices of storage decrease, there is a plan to increase the share. IRENA’s analysis published in March 2021 shows that 543MW of on-grid solar PV could be cost-effectively deployed by 2040, and a number of small off-grid systems could be added in rural areas, increasing the share of renewable energy to above 60 percent.

Rwanda’s ambitious targets in renewable energy are built on sharp rise in renewables over the last decade. In terms of installed capacity, Hydro power grew from 48 MW in 2010 to 116.6 MW in 2020 while solar power reached 12.1MW from 0.3MW over the same period. The two constituted 54% of the total national installed capacity in 2020. In terms of energy generation, Hydropower increased from 177 GWh in 2010 to 527.1 GWh in 2020 while solar jumped from 0.3 GWh to 18 GWh with the two making 61% of the total national energy generation in 2020.

Attractive incentives and facilitation package have been put in place to facilitate investments in renewable energy and energy efficiency in Rwanda. For private developers in the power sector, incentives include provision of investment certificate for the investor’s special treatment, a variety of non-fiscal and fiscal incentives, tax exemption including VAT on importation of some RE equipment, free repatriation of profits, preferential corporate income tax of 15%, Corporate income tax holiday of up to seven years for energy projects producing 25MW with 50M investment and provision of RDB aftercare support to registered projects with Investment certificate.

Stepping up cooperation with IRENA could give an impetus to ongoing Rwanda’s energy transitioning.

“Enhanced partnership with IRENA will promote exchange of knowledge and best practices in renewable energy. We will work together in resource mobilization efforts to implement our Nationally Determined Contribution especially for renewable energy targets. We look forward to scaling up in our cooperation in renewable energy transitioning for a greener future of Rwanda,” Ambassador Emmanuel Hategeka said. 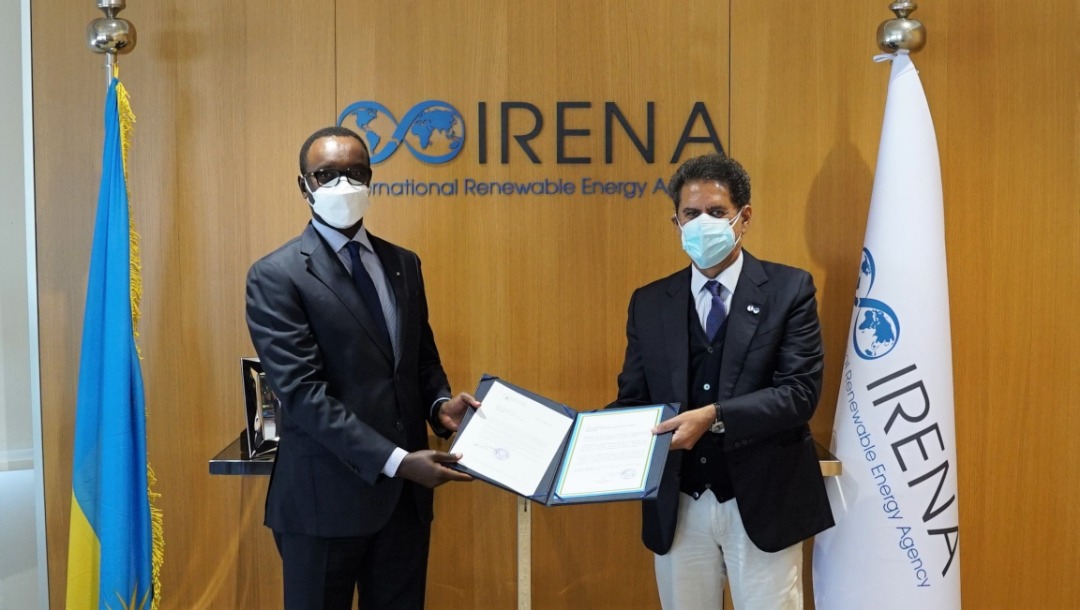 The growing Rwanda-IRENA cooperation opens doors to public and private entities in Rwanda and East Africa. In addition to knowledge and best practices exchange, actors can share projects for consideration by partners collaborating under IRENA’s climate investment platform.

Rwanda joined IRENA in June 2009 and has been an active member since then.  Renewable energy is expected to play a central role in delivering Rwanda’s ambitious Nationally Determined Contribution (NDC), submitted to the United Nations Framework Convention on Climate Change in May 2020 that features a 38% reduction of greenhouse gas emissions compared to business as usual by 2030. The country’s efforts to limit its contribution to climate change and adapt to the consequences over the next decade will require approximately US $11 billion.