Rwanda’s First Lady, Jeannette Kagame, has launched a $20 million initiative to support efforts of financially empowering women in the country.

The funds will facilitate a campaign aimed at lifting one million women out of poverty in 1000 days. She said the initiative is to help women co-create their full financial inclusion, which she said, “resonates well with the broader Rwandan thinking.”

“It is our aspiration as a country to encourage every citizen, to contribute in making a better life for him or herself,” Mrs. Kagame said.

“I call upon the Ministry of Finance and IFC to join this cause,” she said at a conference in Kigali on June 10.

The organization was launched in Rwanda and the First Lady is a Patron.

According to Monique Nsanzabaganwa, the chairperson of the ‘New Faces New Voices’ Rwanda chapter, and Deputy Governor of the Central Bank; for Mrs. Kagame to accept being the Patron, the organizers had to commit that they would uplift at least one million women out of poverty.

Women in Rwanda still face challenges to excel in the financial sector. A survey conducted in 2012 by Rwanda’s National Institute of Statistics indicates that only 36% of women were formally financially included.

Out of this, only 20% of them were involved in commercial banks, 3% in Micro-Finance Institutions and 19% in community savings schemes commonly known as Umurenge Sacco.

Only 2% of women acquired credit from commercial banks, 4% from Micro Finance Institutions, and 2% from Umurenge Sacco.

Rwanda’s financial inclusion is still at 52% with a target of 80% formal inclusion by 2017. On the global scale, only 4% are in IMF decision making positions, 20% in the World Bank.

In Rwanda 82% of women are employed in agriculture, compared to 63% of men. James Mwangi, CEO of Kenya’s Equity Bank Group, told KT Press that, “This should stop.

We need to encourage them on engaging in other businesses.” Graca Machel told the conference that the advocacy group is pushing to have more African women on the global decision making arenas. 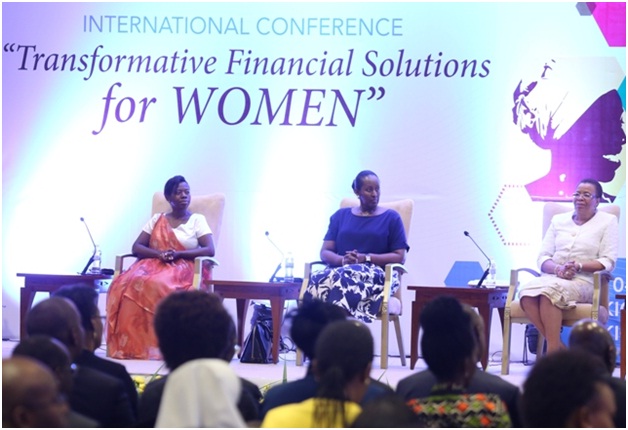 Rwanda To Fund 66% Of Its Budget