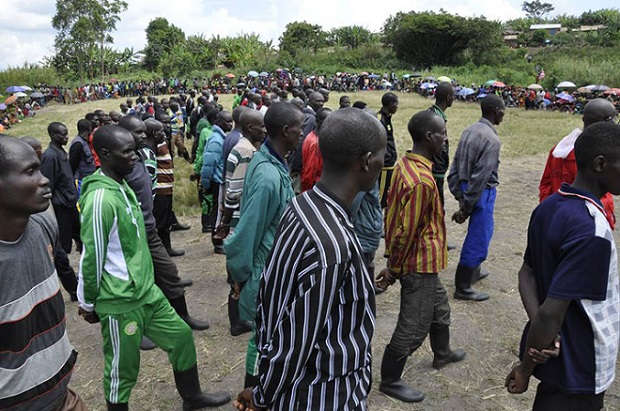 FDLR combatants who have surrendered in recent months and transferred to Kisangani, DRC, as they await repatriation to Rwanda.

The commander who has been handling all dealings of Rwandan FDLR rebels with the outside world has surrendered, KT Press can exclusively report.

Lt. Col Désiré Habamungu, alias Adolphe Habmure, Kaduruvayo, or Bab Adam are all his names. In the jungles of DRC, he has been only known as Lt Col. Adam Bab. The Colonel was with 11 other soldiers, but KT Press has not yet established if they were all his escorts.

Col Baba has been head of FDLR external intelligence. He was based in Ngungu, a mountainous part of Masisi region in North Kivu.

Before moving to work with the top boss, Lt. Col Adam worked as chief of information technology for the FLDR military commander, Sylvestre Mudacumura. The reclusive commander has never been seen in public and faces international arrest over indictment for war crimes.

Col Adam is among many top commanders who have abandoned the DRC jungles to return home. Last month, KT Press featured another defected commander, Col Gerard Ntibibaza, who had been FDLR chief of GI (administration).

He told KT Press exclusively that the militia group has 5,000 combatants spread out in four provinces of DRC, but most of them operating in South and North Kivu. He said as head of administration, he was the one charged with keeping all records about troop numbers, and conditions of the rank and file.

Meanwhile, MONUSCO will handover Lt Col Adam to Rwanda anytime from now, a procedure followed for all combatants who surrender.

Upon arrival at the Rwandan border, he will be received by officials from the World Bank-funded Rwanda Demobilisation and Reintegration Commission (RDRC). He will have to undergo a three-month reintegration program at the Mutobo transition center in Musanze district.

However, his wife and children will be immediately allowed to return to their home village.  KT Press confirmed Lt Col Adam hails from former Byumba prefecture, now Gicumbi district.