Seraphine Mukandamage, an old lady in her seventies was part of the crowd of voters today. The old lady woke up at 1:00am and headed to her polling station, where she enjoyed the guard of police officers, pending the start of election at 7:00am.
“I feel proud to be the first to cast my vote,” she told KT Press after breaking the record of being the first to vote three times in a row. In the two previous presidential elections, she always came at 1:00am. This time, the village chief, Jean Claude Mudateba, awarded her with a radio set, “to keep you updated.”
Four of Mukandamage neighbours were also awarded each with a radio set for coming early, 5:00am. In fact this community, largely made of tea farmers suggested that in the future, polling stations should be open at 5:00am and not 7:00am so that they vote and go to their plantations earlier.
Kitabi is home to the world best tea. It is harvest very early in the morning.
Meanwhile, there almost a fascinating case at every polling station, with many surprises, apart from each station being well decorated like it was a wedding ceremony.
Some people, especially the elderly, came dressed to kill. Men pull out their best suits, some clad in classic old school suspenders, neckties, and very well brushed shoes, shinning. Women came dressed in cultural attire (imishanana) and well-kept hair. 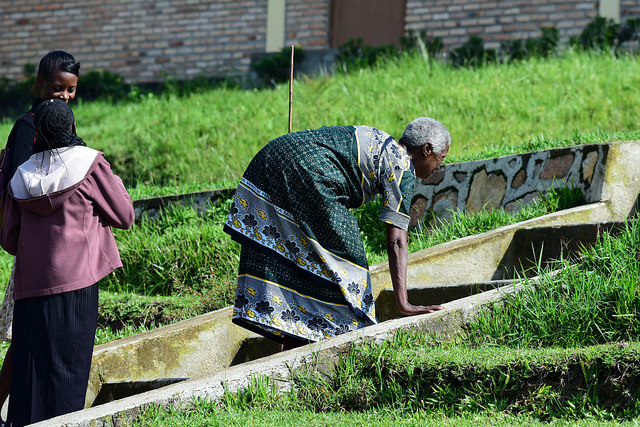 Venues, mostly school classrooms, decorated with cloths in the colours of the national flag-blue, yellow and green. Women in other stations came with baskets full of fruits and firm produce such as avocados, pineapple and ripe banana, to illustrate how the country has become food abundant and prosperous.

Inside every station ensured they were as creative as possible, to make the day memorable. For example, some citizen brought their expensive furniture and placed them inside where you would think you are entering a dining room of a wealthy family.

In Nyarugenge district-Kigali, where President Kagame and family came to cast their vote, one station just 20 meters away, they were handing a flower to voters registered in their cell.

The President’s station wasn’t, so he was not among those to get a flower. However, Senate President, Bernard Makuza who resides in the area got the pink flower together with his wife. All other voters in the station also got one, and a chocolate branded in the national flag colours written on Ndi Umunyarwanda,-I am Rwandan, a campaign aimed at encouraging Rwandans to become resilient and remain united.

Notably, stations were competing to make the best ambiance. Some brought loud speakers to play music.

Jean Mutimura, a pop artist from Shara village in remote Nyamasheke district, Western Province and his neighbors performed live on the street as they headed to the polling station.

Other sites tuned in on local FM stations giving the best coverage of the event, to keep voters updated on what was going on in other areas.

Indeed local media covered the exercise extensively (including Kigali Today ltd). International media camped at a station where President Kagame from. They did not cover the countryside.

After the polls, bras and pubs began getting full, people drinking and dancing across the country, celebrating wildly.  By press time, the results had not been announced, but everyone on the streets and at home were glued on radio stations and TV waiting so eagerly for the results.

Preliminary results from some stations had 100% votes. The national outcome is definitely lower than 100%.

Nevertheless, some voters are saying December 18 could be branded a “YES Day.”