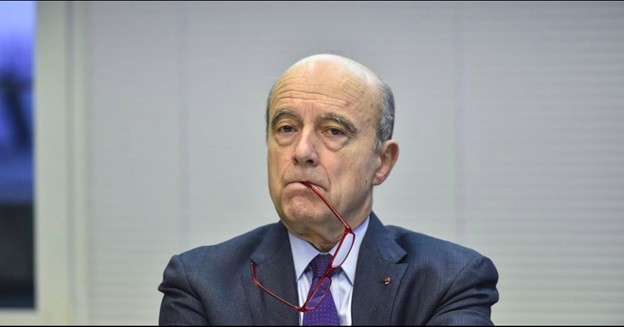 Rwandans are in disbelief as the French electorate prepares to entrust their country to Alain Juppe, who helped sustain the government which executed the genocide against Tutsis in 1994. And he seems proud to want to repeat the same.

The situation gets even more painful following his recent take on Rwanda’s tragic past. At a time when a nation was moaning the loss of over a million Tutsis during the 1994 genocide, Juppe expressed pride for his service to the genocide government.

Survivors of the genocide are reminding the peace-loving French that Juppe will smear them the blood of Tutsis that he has been carrying on his hands.

During a national vigil at the Amahoro Stadium in Kigali for the ongoing 22nd commemoration of the genocide, Prof. Jean Pierre Dusingizemungu, the head of Ibuka, an umbrella of Genocide Survivor Associations, told thousands of Rwandans that Juppé has an ideological problem.

“Alain Juppé along with your colleagues, in one way or another, you have the blood of our loved ones on your hands,” said Dusingizemungu.

“You are seeking to be president of France, do you want to also smear them?” posed Dusingizemungu. As he spoke, there was repeated outbursts of emotions from survivors whose memories were coming back.

Juppé’s reckless comments made on April 1 negate his own personal and his country’s role in the genocide regardless of the fact that a French parliamentary commission of inquiry documented all the evidence.

Despite the proven mass slaughter record, Juppe said pinning the genocide on France was a “disgrace and historical falsification”.

At the commemoration vigil in Kigali, there was a delegation of French parliamentarians. And genocide survivors were keen to send them back with a clear message for their fellow French: Alain Juppé and many others are genocide fugitives.

Dusingizemungu said Juppe and others should be prosecuted, and not out campaigning. A two-year inquiry back in 2008 identified 33 French political and military officials for personal culpability in aiding the genocide government.

IBUKA grouping wants the ordinary Rwandans to ferociously fight back against the denial of the genocide against Tutsi. As for the government of Rwanda, the survivors want increased diplomatic engagement to ensure all suspects including Alain Juppe are prosecuted.

Following the halting of the genocide, Alain Juppe and his cabinet colleagues maintained a supply line for arms and political cover for the militias as they regrouped in the great lakes region. They metamorphosed into the so called democratic forces for the liberation of Rwanda or FDLR.

Speaking at the same 22nd Kwibuka (commemoration) vigil, President Paul Kagame warned any attempt to continue destabilising Rwanda would be met with unwavering counter force. The cost will be too high, he added.

“They will never know what hit them,” warned Kagame.

After the night vigil, President Kagame addressed a press conference where he also repeated more condemnation of ongoing denial and negation of the genocide by French politicians like Alain Juppe and Hubert Vedrine.

Without making direct mention of any individuals, Kagame said in spite of all the contempt, Rwandans will move on. He however also added that Rwandans will also continue battling all forms of genocide negation.

“Rwanda will continue to live on and progress even whether France accepts its responsibility or not,” said Kagame.

He said people who have responsibility in the genocide have not been tried and that the “real issue has not been addressed”– the underlying obstacle not being anything else, but because there is “nothing new” from accomplices like France.