Who is Bishop Mbonyintege Fooling?

The Catholic Church in Rwanda has insisted it will honour two priests convicted of genocide during the silver Jubilee celebrations on July 16.

Last week, Smaragde Mbonyintege the Bishop of Kabgayi Diocese had denied endorsing an invitation letter containing a list of priests to be honoured two of whom are serving long prison sentences for their role in the 1994 genocide against Tutsi.

Mbonyintege, said he does not see any reason why the Diocese should not honour the services of its priests regardless of their personal crimes.

“Although they are in prison (priests) they are still ours irrespective of being convicted of personal crimes while serving as priests.”

He added, “We cannot erase them out of our minds. They are our people. They are citizens of this country and belong to Catholic Church. We shall go on with celebrations to thank God and repent before him.”

Mbonyintege says that the Catholic Church remains faithful to its priests, despite committing personal crimes.

Recently Kabgayi Diocese printed and circulated a letter inviting Catholics for silver jubilee celebrations and also honour seven priests for their outstanding service to the diocese.

However, two of the priests on the list; Fr. Emmanuel Rukundo and Fr. Joseph Ndagijimana are genocide convicts.

Dr. Jean Damascene Bizimana, the Executive Secretary of the National Commission for the Fight against Genocide (CNLG) expressed impatience about the letter.

“The silver jubilee celebrations should be honouring someone that has properly executed their duties,” He said, “We don’t understand why a genocide convict should be thanked and praised.”

Mbonyintege immediately distanced himself from the letter, telling the media that he was unaware of who among his staff at the diocese had printed the invitation.

However, he later changed his mind, telling a local news website Ukwezi.com that the letter was indeed printed by one of the priests at the Diocese and celebration for the Silver Jubilee will go on as planned.

In 2001, Rukundo was arrested by Swiss officials acting on an arrest warrant issued by International Criminal Tribunal for Rwanda (ICTR) and was later extradited to Arusha, Tanzania.

The International Criminal Tribunal for Rwanda charged Rukundo with among other crimes; genocide and crimes against humanity including murder and extermination. He was found guilty and sentenced to 25 years in prison.

Fr. Joseph Ndagijimana, was arrested and accused of facilitating the murder of several Tutsi hiding at Byimana Parish and didn’t spare a fellow priest Alphonse Mbuguje of Cyangugu diocese.

After the Genocide, Ndagijimana was tried under Gacaca community court after he was found guilty and sentenced to life imprisonment at Mpanga prison in Southern Rwanda.

Rwandans have since last week taken to social media to protest the revelation by Bishop of Kabgayi Diocese, some calling it ‘betrayal’ to the Catholic community in the country.

A Tweeter hashtag #HelloSmaragde was created in protest of the celebrations.

Rwanda’s ambassador to Belgium, Olivier Nduhungirehe tweeted; “Beyond the moral aspect, this is a betrayal of millions of Catholics in Rwanda, who include genocide survivors.”

Noel Kambanda, another Rwandan tweeted telling the Archbishop; “This is why ICTR sentenced him (Fr. Emmanuel Rukundo) to 23 years’ imprisonment on 20 October 2010. I won’t attend your mass celebration.”

For Fulgence Minani, the decision by Kabgayi Diocese to proceed with celebrations shows that “A genocidal cloud still hovers over church, Catholic church have to live with it, no matter its denial.” 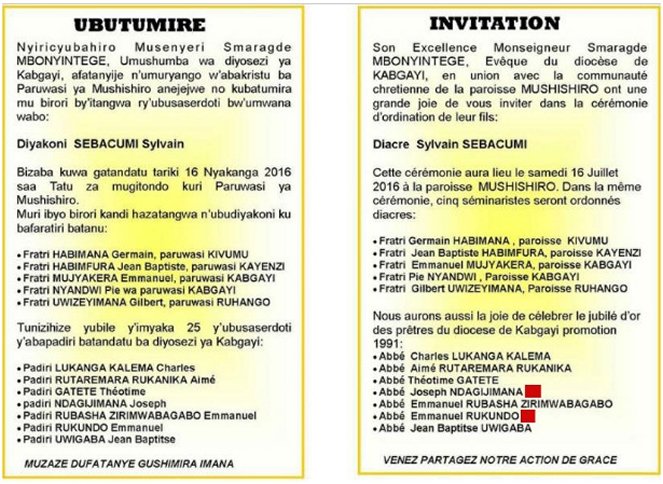 The invitation to the silver jubilee celebrations