Home Obituaries Sen. Mucyo: A Selfless Man and Father to So Many
Obituaries

Sen. Mucyo: A Selfless Man and Father to So Many 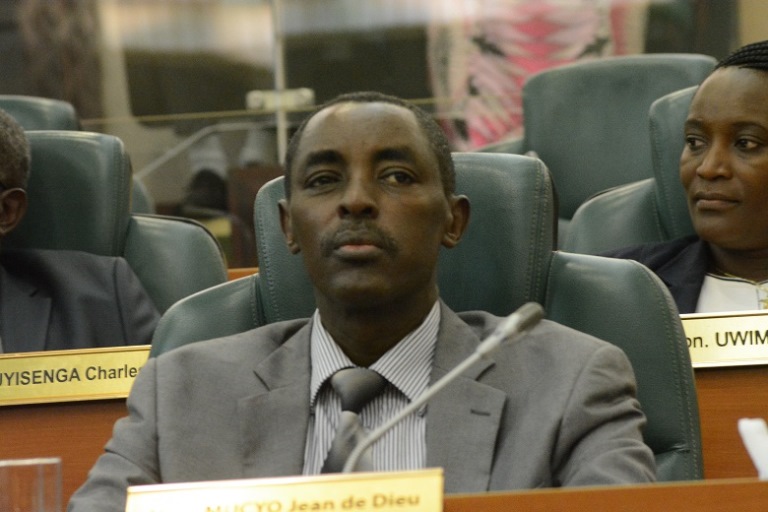 It all started a normal business early today morning at Rwanda’s Parliamentary Building in the capital Kigali. However, around 9am, total darkness filled all over the building as Sen. Jean de Dieu Mucyo fell down at the stairway and pronounced dead minutes later.

The death of Sen. Mucyo, who served in different public institutions including as Justice Minister, emerged like a thunderbolt from a clear sky. The entire country was shocked.

After the incident happened, Sen. Mucyo was rushed to King Faisal- one of Rwanda’s referral hospitals but died shortly after reaching there. A statement signed by the Senate President, Bernard Makuza was later issued.

“It’s with heavy heart and great sorrow that the Senate of Rwanda announces that Honorable MUCYO Jean de Dieu has passed away on this September 3rd, 2016 in the morning as a result of stairway fall in the Senate building,” the statement reads in part.

Late Mucyo was well known in Rwanda after the 1994 Genocide against Tutsi. He held various positions including being Justice Minister, Prosecutor General, and also led a famous ‘Mucyo Commission’ that investigated and reported on France’s involvement in the 1994 Genocide against Tutsi. Senator Mucyo was appointed Senator by President Kagame in 2015, immediately after serving as Executive Secretary at National Commission for the Fight against Genocide (CNLG).

His death has left Rwandans especially those who worked closely with him in total shock.

Dr. Bideri Diogene, Principle legal advisor at CNLG who has been a colleague and a friend to late Mucyo told KT Press that Rwanda has lost a hero.

“He did what everybody thought was impossible…he was a hard working person, courageous, selfless and above all he made sure everyone would fulfil his responsibilities,” Bideri said adding that: “He has left us soldiers who will protect his achievements and carry on his legacy.”

According to Bideri, “Mucyo was a punctual person and too creative in thinking what is good for Rwandans. All people who worked with him can testify this.” In a grieved voice, Bideri told KT Press that he has not only lost a colleague but a brother who has always been there for him.

“He trained many of us to become who we are but we will still miss his thoughtful advices,” added Bideri.

In a lot of things that will be kept alive in memory of late Mucyo, Bideri recalls, include a speech he delivered during the 15th commemoration of 1994 Genocide against Tutsi where he quotes him saying: “Survivors should strive to have hope for living.”

In an interview with KT Press, Senate President Bernard Makuza, said Senator Mucyo has been a hardworking colleague-a character he carried on until his last breath.

Commenting on the deceased work ethic, Senate President told KT Press: “He has been carrying his duties as normal. He was in Ruhango district on Saturday to mark the ninth edition of the Unity and Reconciliation Week. And yesterday he was with people from Huye district,” Makuza told KT Press.

Senator Chrisologue Karangwa summed up all the Mucyo’s characters and said “He was a role model to many. He has gone too early.”

Meanwhile, the death of Senator Mucyo sent shockwaves to his native area of Mbazi in Huye district, Southern Rwanda.

Innocent Mutangana, Executive Secretary of Mbazi sector told KT press that they are in a heavy sorrow of losing a son.

“He was one of us; he has been contributing to the development of our sector. He had built around 20 houses for the Genocide widows and a nursery school here. Whenever we needed him, he would be willing to support us not only financially but also in terms of ideas. He was a parent to many,” said Mutangana.

Until now, no postmortem has been released to identify the cause of late Sen. Mucyo’s death. “So far we can’t confirm the cause of his death. We are still waiting for the doctor’s postmortem,” Senate President Bernard Makuza told KT Press.

UR Admits Mismanagement of Billions in Public Funds

MPs discover remains of Abacengezi victims in a Genocide memorial