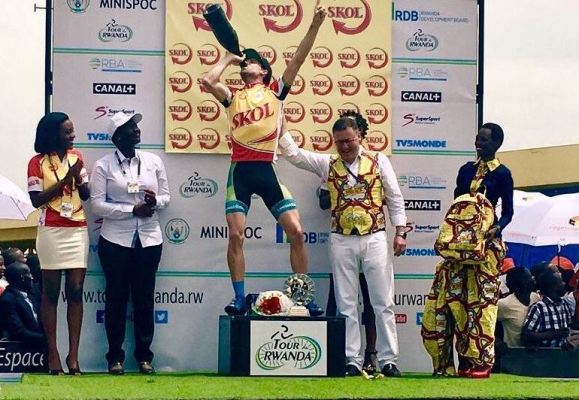 Timothy Rugg after winning the prologue

It was a debut day win for American cyclist Timothy Rugg as he claimed the much sought after leader’s yellow jersey on day one of this year’s Tour of Rwanda.

“We did not know what to expect as we hardly knew the strength of most teams but the whole team had a good race.We will keep the momentum. I know tomorrow is going to be much harder as many of the teams will be attacking much more,” said the 31 year old rider.

It was a rather disappointing day for last year’s winner Jean Bosco Nsengimana. This year, he will be riding for Belgian side Stradalli Bike aid as he finished four seconds behind the winner for a fifth place finish.

Last year’s runner up Joseph Areruya cycling for Les Amis Sportif was the highest ranked Rwandan cyclist on the day finishing in third place. He expressed optimism in a build up to tomorrow’s grueling stage.

“It is going to be a tough tour as many of the teams are experienced but we are at home and hope we can use of our home support to have good results,” he said.

The 2014 winner and home favourite Valens Ndayisenga was six seconds behind the leader to finish the day in sixth position as he made a return to the Rwandan circuit having been away for large parts of the year competing on the African and International tour.

“We were not at our best (Qhubeka) today and I’m sure we will get better as the tour progresses,” the Rwamagana born cyclist said.

On Day two and Stage 1 of the Tour, cyclists will set off from Kigali to Ngoma in Eastern Province covering a total distance of 96.4 kilometers.