On a sunny day, one may quench their thirst by just swiping a smart card on a new mobile milk gadget and fill-up a cup.

Olivier Mugiraneza 22, a third year student at Institute of Polytechnic Regional Center (IPRC) Kigali is exhibiting ‘Kozaho Ushire Inyota’. He has been  building the gadget for past six months.

This isn’t the first. There are other slightly similar gadgets on the market where city dwellers slot-in coins and fill milk into disposable cups.

However, Mugiraneza’s machine is improved –  it has a provision where clients can swipe with smart cards and get served any amount of milk ready to drink.

Construction of the Rwf 3 million machine was funded by his school and, Mugiraneza said, he is going to start multiplying it by January 2017.

The machine has first appeared in Made in Rwanda trade fair that is taking place in Kigali between December 14-20.

“This tool accepts coins of Rwf 50 and Rwf 100, however you can use your smart card and get milk equivalent to the amount you want, either Rwf 30 or 80,” Mugiraneza told KT Press.

Mugiraneza also said the smart cards that will be used are only those that are reserved exclusively for that machine. However, there is a plan to match them with the ‘Tap and Go’ cards, also by a young Rwandan that are reserved for city transport.

The machine has a storage container of 500 liters but when there are only 10 litres left, it automatically sends a SMS to phone warning to the operator to re-fill.

The milk machine is now worth Rwf 3 million. However, the price is expected to reduce as much as people buy them.

So far, Mugiraneza has produced two machines and has a plan of negotiating with milk vendors to install the tap system on their milk tanks.

“I will find means and fabricate more machines because I want to make it my business,” Mugiraneza said.

When Inyange industries purchased Mukamira Milk Centre, it introduced milk vending machines worth Rwf 23 million each, however they were not equipped with the tap system. 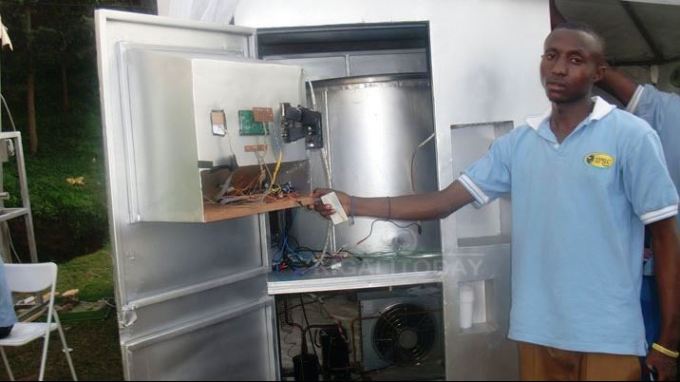