Rwanda Government has provided security to Caporal (Rtd) Thadeo Karamaga – a man who has received several death threats for hiding body of Ex-Premier Agathe Uwiringiyimana during the Genocide Against Tutsi.

During the Genocide which claimed over 1 million lives, Caporal Karamaga was a morgue attendant at Kanombe Military barracks under President Juvenal Habyarimana’s regime.

Karamaga had done that job for 10 years when the Genocide started on April 7, 1994. On that very day, Prime Minister Agathe Uwiringiyimana who had already denounced the wrong doings of the ruling government was among the first politicians to be killed by the presidential guards alongside her ten Belgian bodyguards.

According to previous stories KT Press wrote, his commanders rushed the body of Prime Uwiringiyimana to Kanombe military cemetery and handed it to Karamaga for immediate burial.

But the man was cautious; he hid the body in the mortuary until the fall of Kigali. He handed it to Rwanda Patriotic Army (RPA) Inkotanyi for decent burial.

Last week, during the closing of Genocide commemoration week – Kwibuka 23, Karamaga gave his testimony on how he hid the body and then handed it to Rwandan liberators.

He also testified on more Interahamwe militia killings during the Genocide, and how he saved many Tutsi.

Amid his testimony, however, Karamaga drew attention from participants led by Senate President, Bernard Makuza, when he said he fears for his dear life following several death threats sent to him by anonymous people.

According to Karamaga, they threaten him with warnings that he will pay the price of all he did to “betray” them.

“I received three calls; two in November and December 2016 and a recent one in January this year with people from abroad saying that beware; we shall kill you soon because you continued betraying us for this long,” Karamaga told mourners at the closing of Genocide commemoration week.

Senate President Bernard Makuza who was presiding over Kwibuka event at Rebero where Uwiringiyimana is burried alongside 11 politicians and 14,000 Genocide victims assured Karamaga, nothing will happen to him.

“I just want to assure you, be still, nothing wrong will happen to you. Fear not,” said Makuza, Senate President.

Police spokesperson, ACP Theos Badege told KT Press that indeed, “a witness who expresses worries about his life publicly and is assured of special protection by senior officials, that protection is always given,” said ACP Badege.

“We are indeed happy to hear that he feels secure.”

ACP Badege however said, security is guaranteed for all the citizen in the country. They all enjoy security, not upon request.

Who is threatening to kill Karamaga?

According to Karamaga, the first call where people threatened to kill him was from Germany. He told KT Press, “A man yelled at me and said; you always denounce us. Mind your life because you have exposed yourself.”

In the second call in December 2016, another man whose cell phone code from Pakistan uttered the same threatening words like the previous one, with the same rude tone.

The last call in January was from Democratic Republic of Congo (DRC), also with the same threat.

“The first message however, was the most terrifying,” said Karamaga.

Karamaga is suspicious about the person behind the message; it is probably from the commander of his battalion that was in charge of  Batiment Militaire, one  Major Augustine Ntihora. 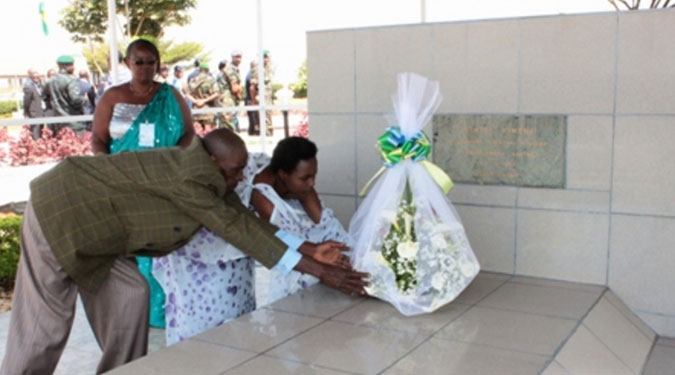 “He is the one who gave me the order to bury the body of Prime Uwiringiyimana. I picked it (the body) at his office. It was very fresh; blood was still running out from the breast and the forehead where she was shot dead,” said Karamaga.

“She was laid in an ambulance on a brand new mattress.”

After the genocide, said Karamaga, Maj Ntihora would have fled to Germany where he made good friends during his school time.

“He studied primary and secondary school in Germany, which makes the country his other home,” he said.

Beyond that, Karamaga said, I used to be reluctant to some of my commander’s orders in regard to the burial of several victims that were killed in Kanombe.

“He used to tell me to pack the bodies. It was not my job, mine was to supervise their burial activities. One day, he almost shot me.”

Meanwhile, Karamaga is considered a hero in Rwanda.

In 2015, he was recognized by the First Lady Jeannette Kagame among 17 Protectors of the Friendship Pact (Abarinzi b’igihango) who saved people’s lives during the genocide.