Rwanda Embassy in Kenya Shuts out UN From Genocide Event 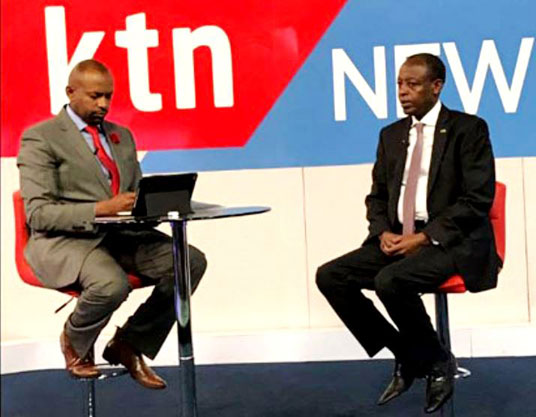 Rwanda’s High Commission in Kenya has blocked United Nations from attending Genocide Commemoration events set to be held in Kenya.

Hosted on Kenya’s television network (KTN) on Wednesday to discuss the 23rd Commemoration of Genocide Against Tutsi, James Kimonyo – Rwanda’s High Commissioner to Kenya, said that events will not be jointly held with UN like in the past.

The decision to block UN’s participation in commemorative events this year, resulted from the United Nations’ failure to implement a UN Security Council resolution which finally accepted that Rwandan Genocide was a ‘Genocide against Tutsi’.

In January 2014, the UN Security Council adopted a new global reference to the 1994 mass slaughter in Rwanda as ‘Genocide against Tutsi’. This was after years of confrontational campaign by Genocide survivors in Rwandan.

High Commissioner Kimonyo accuses UN of remaining adamant in implementing the reference to the 1994 massacre.

Amb. Kimonyo said; “The UN refers to this event as Genocide in Rwanda and we all know that Genocide was carried out Against Tutsi.”

According to Amb. Kimonyo, “Referring to it as Genocide in Rwanda makes it sound like another country organised its people to massacre Rwandans. We can’t afford to continue being part of this confusion.”

Article 2 of the Convention adopted by United Nations General Assembly on 9 December 1948 defines Genocide as; ‘Acts committed with intent to destroy, in whole or in part, a national, ethnical, racial or religious group.’

And for Amb. Kimonyo, “In our case, the UN knows very well who committed these acts against who, therefore they should refer to it by its true appellation.”

Meanwhile, the High Commissioner in Kenya announced upcoming events to be held including a public lecture at Nairobi University.

The Commission will officially hold Kwibuka23 in Kenya’s coast City of Mombasa on 22 April 2017.