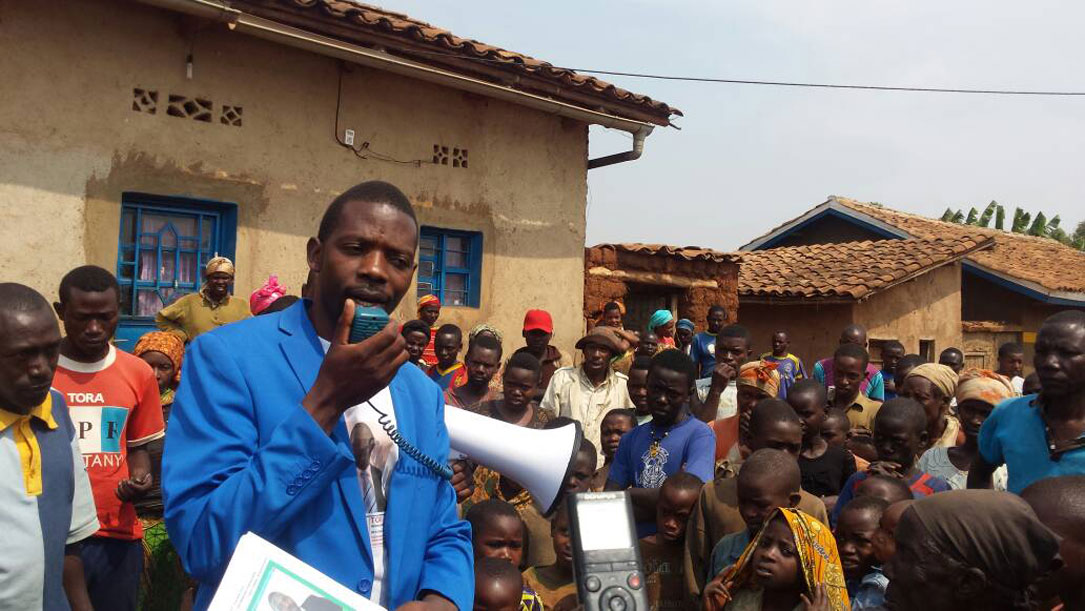 Independent candidate Phillippe Mpayimana continued campaigning throughout Sunday promising that his government would ensure no drop of water is wasted.

Mpayimana campaigned at three sites in the southern province, including Mara in Gishamvu – Huye district, Busanze in Nyaruguru district, which is allegedly his birthplace and Rwanza, an open-air market in Save sector, Gisagara district.

KigaliToday journalist at the campaign rally said that the candidate chose Rwanza strategically.

“A crowd gathers at Rwanza on Sunday, a market day,” he said.

Thus, Mpayimana benefited from a wider audience compared to previous days; around 120 people, according to our reporter.

“Most of them however carried RPF flags,”he said.

Mpayimana was accompanied by his campaign manager, one Vincent Kayisire. He told Rwanza residents, “If you vote for me, I will make sure that there is no wasted rain water. You know when we do not harvest water effectively, erosion follows. We lose our water, then our land.”

While in Gishamvu, Mpayimana said he would change farming system in Rwanda. “Land consolidation is good but is not used effectively. I would allow every farmer to grow whatever they want,” he said.

The voters however asked Mpayimana what is new. For example, they said the land consolidation is helping them to grow rice, which is earning them money.

“I am not changing policies, I am proposing to deal with loopholes,” he said.

For the last two days, Mpayimana has been improvising, changing campaign venues, skipping some others.

This makes it hard for the media to cover his campaigns.

When he started in Bugesera, Mpayimana said he is fine with his natural voice while in campaigns, but on the following days, he has acquired a megaphone that uses batteries. He first uses it to call people to come and listen to his manifesto and then uses it to address them.