Kagame Offers Himself as ‘Shock Absorber’ for Rwanda 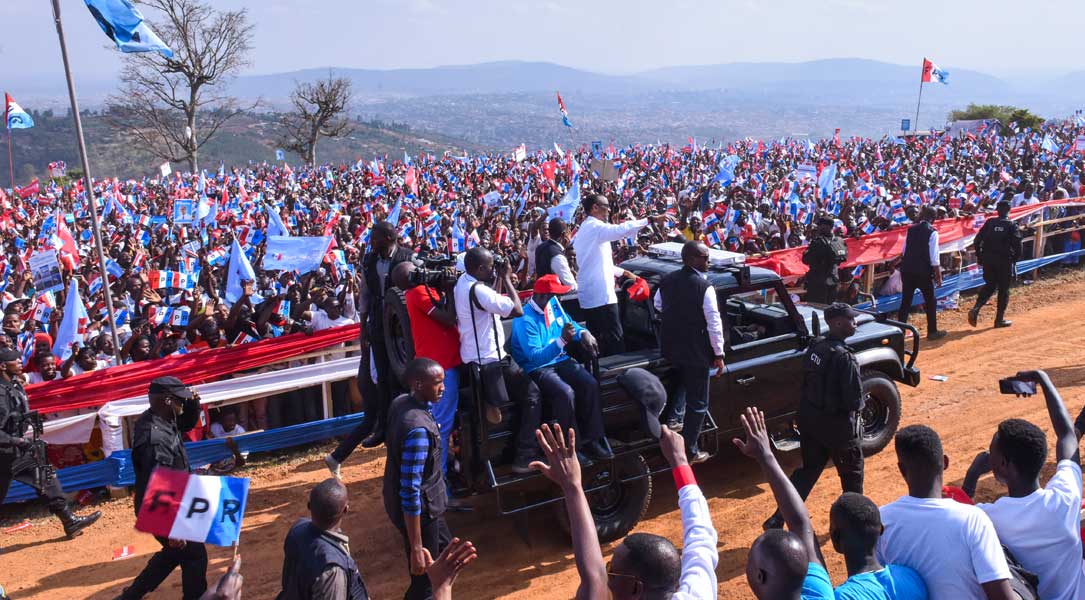 Twenty days of aggressive presidential campaigns have come to an end and the next task is for voters to decide who will be the next president of Rwanda on Thursday and Friday.

But before candidate Paul Kagame the flag bearer of Rwanda Patriotic Front party sealed his campaign trail at Bumbogo sector in Gasabo district, he punched back at critics that regularly fault Rwanda’s democracy and leadership.

“Results of previous elections in the West were contested under claims that  their ICT system had been interfered with. Then I wonder if their democracy fails how they can claim to be democratic – to an extent of saying that it’s the computer that gave them a ‘president,” Kagame said without referring to a specific country.

However, last year, Donald Trump won the US presidential elections but a large  block of voters claimed Russia -a cold war rival hacked into computers of the US election system and altered votes in favour of Trump.

Kagame said that critics of Rwanda have not gotten used to how Rwandans act and how they choose what they choose to do, instead condemn the democratic process and leadership in the country.

With such threats from critics Kagame said he was ready to absorb any shock resulting from beating aimed at Rwanda.

“Elected leader of the country is the ‘shock absorber’ of all the hits on his people and all the beating will not reach you, it will be on me while I am still alive. The beating will end on me.”

Just like at all RPF campaign rallies in the country’s 30 districts hundreds of thousands of party supporters today assembled at Bumbogo sector to receive candidate Kagame accompanied by The First Lady Jeannette Kagame.

For the first time, all eight political parties allied to the RPF were given space to address the rally.  For Kagame, the alliance a new and unique path of Rwanda’s formula of democracy.

The Liberal Party (PL) representative Donatile Mukabalisa hailed candidate Kagame for his leadership and helping Rwandans to grow from nothing to something starting with the liberation struggle.

“You showed us love and we shall vote for you. We have all witnessed Kagame’s support across all rallies and this means that he will definitely win.”

Musa Fazil’s the PDI party president in 2011 was the first to propose a constitutional amendment to allow Kagame to be re-elected this year.

PDI’s proposal received massive backing with over five million Rwandans voting for amendment of the constitution in 2015.

Soon in December same year during the State of the Nation address Kagame accepted to follow the wish of the citizens and officially accepted to do what people have asked him.

For Harerimana “Whoever doesn’t support Kagame is just a detractor. We just put you (Kagame) in God’s hands throughout this journey.”

PDC party representative, Agnes Mukabaranga says that the party members have lots of hope in Kagame and will definitely vote for him.

“Even those who don’t want to believe in our political uniqueness, technology will prove them wrong,” she said.

A part from political parties, RPF had support even from ‘friends’ like senate president Bernard Makuza who said Kagame’s leadership is unique because he never fought to become president.

The Fist raise high is a symbol of the Rwanda Patriotic Front party. For Kagame, the fist in the RPF emblem also represents the coalition.

“The Fist is a sign of our unity, uniqueness, our development, it means that Rwandans have peace and people work for their county. It means that the leader is held accountable and citizens speak their mind to the one they want to tell,” he said.

Kagame noted that with the new path of democracy in Rwanda, its coalition means working at fast pace to reach where the country wants to go and the youth, private sector have to be a big part of this decision, while women must work alongside their husbands

“All this means working with others towards development for all,” Kagame said.

Meanwhile, RPF campaigns this year were marked by huge crowds like never before.

Across the country, thousands of supporters slept at the campaign venues to make sure that they take the best place – close to Kagame.

No wonder, the youth also had an opportunity to dance to live music performed on live on stages by their favourite artists at all RPF campaign rallies.

Creativity was at its best; the Name Kagame got written on hills rivers, lakes and supporters also printed RPF tattoos on their bodies.

Security and safety was assured allowing even the weak – elderly, expectant  women, children and the disabled to attend in huge numbers.

At campaign rallies, women just as required of them in the Rwandan culture, had an opportunity to offer milk to candidate Kagame –  the best gift a Rwandan can offer to a friend. Milk is considered a symbol of prosperity, long life. Traditionally, it is a woman that offers milk.

Of course, women will be remembered in the campaigns for warming up the crowds and their creativity in campaigning for Kagame.