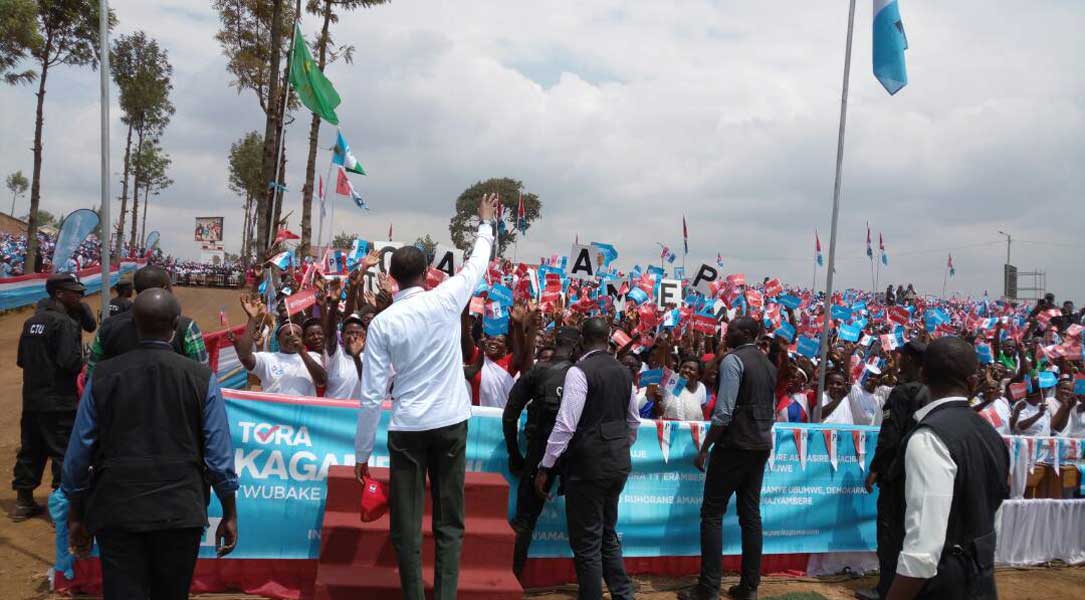 Candidate Paul Kagame has concluded his up country campaigns with Gicumbi district, a region from where “he crafted Rwanda.”

In the early days of the liberation struggle under the command of Kagame,Gicumbi area hosted the first headquarters of RPF rebels in Rwanda. Since 1990 the RPF has enjoyed a special bond with residents of this district.

Kagame regularly visits Gicumbi- the elders in the place also speak to him more like a friend, a close relative.

As the RPF flag bearer campaigned in the area today August 1st , it looked like a liberation celebration.

“Gicumbi people. Your son, brother and friend is here. He has come with grandchildren,” the vice president of RPF, also native of Gicumbi Christophe Bazivamo told thousands of supporters in Cyumba. Kagame was, not only with first family but also sisters.

Cyumba hill is a walk away from ‘Umurindi w’Intwari’ village  hosting a bunker where Kagame planned and commanded the battle.

“You all remember that this is the place where Kagame planned liberation struggle,  and won it and repatriated refugees from Zaïre. We owe him a lot,” an excited Jean Marie Vianney Gatabazi also a member of parliament said.

Gicumbi is actually the biggest supplier of milk to Kigali with 80,000 liters every day; “He gave us milk, we owe him votes,” supporters unanimously sang.

Gicumbi district also is popular for high quality tea plantations and a massive tea factory . There are also two district hospitals, 70 secondary schools. Electricity was extended to all sectors of the district.

“It all came under Kagame leadership. Remember, the first centimeter of Rwanda started here, the Rwanda that grew to become a strong nation today,” Gatabazi said.

With all these achivements in Gicumbi , the campaign for votes in the area is just a walkover for candidate Kagame who enjoys a special bond with residents.

“There is no better place to say this than Gicumbi.”

For candidate Kagame, the next 7-year presidential term should be handed to RPF party.

As usual, he also recognized the coalition – 8 political parties with RPF.

“Some people do not understand this…but this explains our uniqueness.”

Kagame warned Gicumbi supporters to never listen to mere critics who take for granted the liberation of the country and its actors.

“Things we built at a sacrifice of our people…no one should play about with them. Whatever we built, none will afford to destroy them,” Kagame said.

They have tried for the last 23 years but failed and they will never manage.

“There are people who are paid for that, but I am not the one paying them, and I lose nothing from their talking.”

Kagame said whatever was achieved, he has power to boost them a million times.