First Lady, Mrs Jeannette Kagame has told parents to give children ample time to ensure their decent education which would guarantee their growth and excellent school performance.

Much care to the children, she said, will lead to the Rwanda that is desired; a transformed country where notable changes in people’s lives are seen. 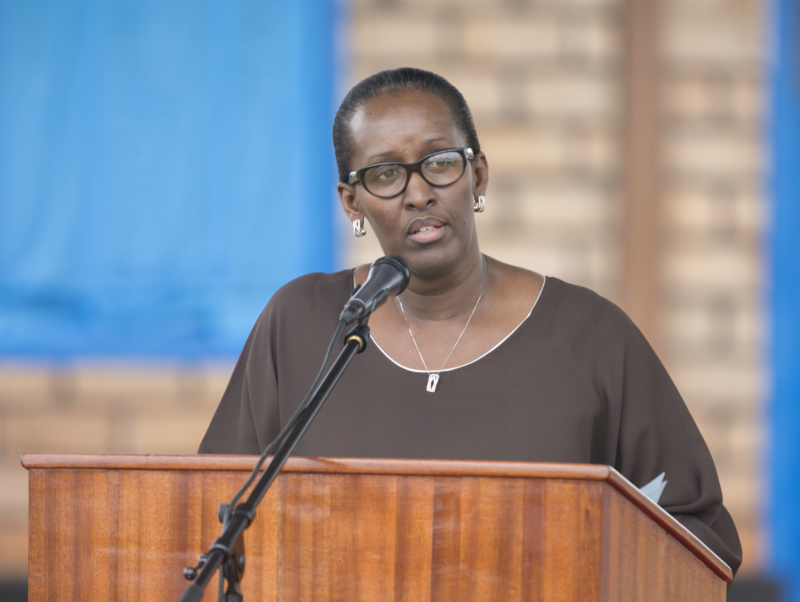 The First Lady was the guest of honor at the launch of the Campaign on Governance and Family Promotion, October 11th in Kirehe district.

“Let’s find time to talk about our children’s education, let’s provide them with all they need to grow and study well,” she said.

She explained that talking to girls and listening to their concerns would help parents discover gaps in their sexual health knowledge and prevent occurrence of early and unwanted pregnancies.

A survey conducted between the months of July and September in the Western Province revealed a rise in teenage pregnancies with an average of 25 girls being impregnated every day.

The survey which was conducted by CLADHO – an umbrella of 12 human rights civil society organisations shows that a total of 2,233 school girls in western province have been found pregnant.

According to the First Lady however, it’s not only the assignment of parents to protect children. Teenagers should also avoid vices that may hurt their future.

“Our dearest children, as solid pillars of the family, remember that your future will depend on the choice you make. Avoid those that lead you into vices. We shall repeat this until we no longer hear about such alarming figures on early pregnancies that were presented here,” the First Lady said.

The First Lady has been championing family promotion in Rwanda, and her holistic program starts with children.

“From 2013 to date, we have set up Early Childhood Development Centres in 16 districts across Rwanda,” she said.

ECD program largely focuses on child development while providing an indispensable package to expectant mothers and children up to six years, and their caregivers.

At ECD Centers, care givers help children to, among others, discover their talents at early age, to be hygienically smart, to take care of the people and general environment around them.

“Let’s make this campaign on “Governance and family promotion” part of our daily lives,” said the First Lady.

Imbuto Foundation, on organization chaired by the First Lady, ministries that have family in their attributions, para-statal institutions and the civil society are partners in this Campaign on Governance and Family Promotion.